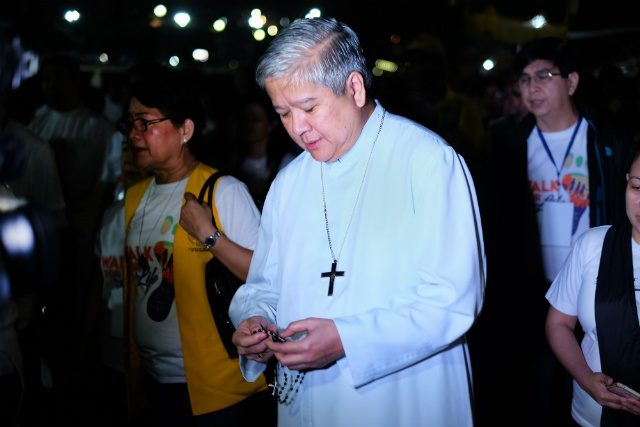 MANILA, Philippines – Slammed by critics for supposedly condoning drug addicts, the head of the Catholic Bishops’ Conference of the Philippines (CBCP) made himself clear on Saturday, February 18: Criminals should go to jail.

(Criminals should be arrested, sued, convicted, and jailed to correct their mistakes. Their violations should be proven in a court of law, not through the law of bullets.)

The Catholic Church opposes the death penalty, which Philippine President Rodrigo Duterte pushes as part of his war on drugs. (READ: CBCP hits death penalty: ‘No person beyond redemption’)

Villegas spoke at around 4:30 am on Saturday at the Walk for Life, a grand Catholic procession against extrajudicial killings and the proposed revival of the death penalty.

Police said up to 10,000 Filipinos joined the biggest Catholic rally in recent years.

In his speech, Villegas explained that the Walk for Life began at 4:30 am because it is during these hours that people find dead bodies on the streets or near the garbage cans.

It was also around this time when national hero Jose Rizal walked to Luneta, near the site of Saturday’s event, to be executed by firing squad on December 30, 1896.

Having explained this, the CBCP president stressed the Catholic Church’s stance against the death penalty

(The death penalty is against the sanctity of human life. Instead of the death penalty, let us cleanse the police, fix our courts, and be stricter in running jails.)