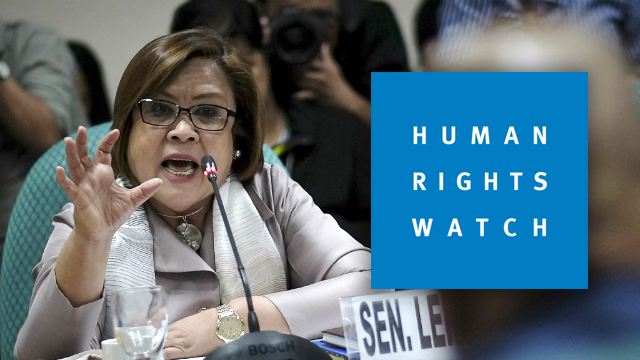 Human Rights Watch (HRW) on Sunday, February 19, said the prosecution of De Lima is an “act of political vindictiveness” as she is one of the few vocal critics of President Rodrigo Duterte in the government.

“The prosecution of Senator Leila de Lima is an act of political vindictiveness that debases the rule of law in the Philippines,” HRW deputy Asia director Phelim Kine said. “The Duterte administration seems intent on using the courts to punish prominent critics of its murderous ‘war on drugs.'”

The filing of charges was the culmination of numerous public hearings where convicts and former colleagues testified in front of legislators regarding the drug trade inside the national penitentiary.

According to HRW, the prosecution of De Lima is “a relentless government campaign of harassment and intimidation” that came with her outspoken criticism of Duterte’s intense anti-drug campaign and also allegations of vigilante-style killings in Davao City.

As chairperson of the Commission on Human Rights (CHR), De Lima led the investigation on the alleged existence of the Davao Death Squad (DDS) which has been accused of carrying out at least 1,000 summary killings.

In 2012, the CHR said it found “probable cause” and recommended that the Office of the Ombudsman investigate the “possible administrative and criminal liability” of Duterte in relation to the numerous killings under his watch as Davao City mayor.

“The politically motivated case against De Lima shows how Duterte’s ‘war on drugs’ threatens not only the thousands of people targeted, but the criminal justice and political systems,” Kine said.

“It’s more important than ever that concerned lawmakers and foreign governments step up to denounce the Duterte administration’s disregard for basic human rights,” he added. – Rappler.com