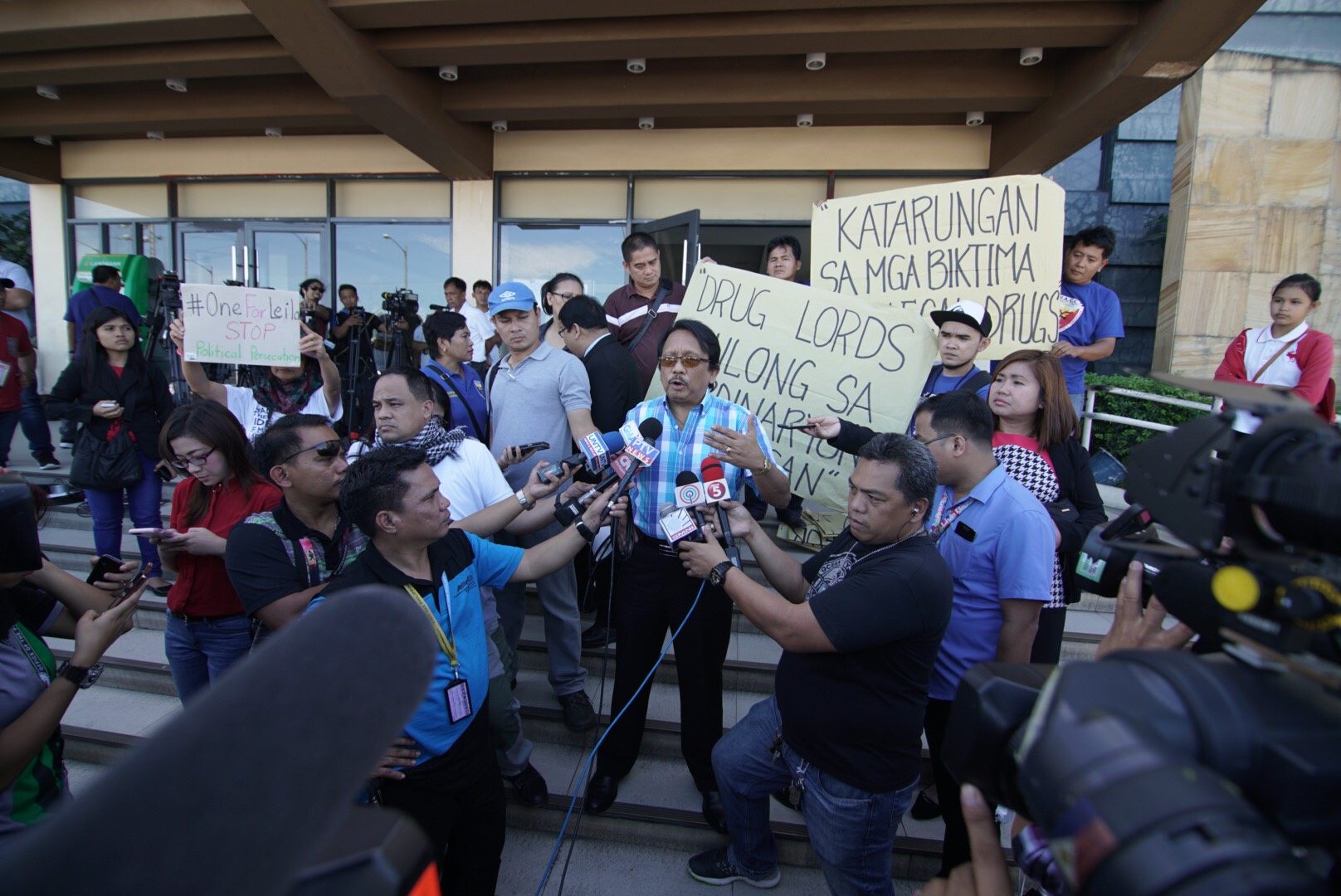 Each judge will decide whether there is probable cause to issue an arrest warrant against De Lima:

Dante Jimenez, chairman of the Volunteers Against Crime and Corruption (VACC), which was one of the complainants in drug cases filed before the DOJ, went to the Muntinlupa RTC on Monday to observe the raffling of cases.

“We’re happy about this development. Despite some people’s opposition, we must follow the rule of law,” Jimenez said in a mix of English and Filipino.

Senate President Aquilino Pimentel III said that law enforcers had been briefed about Senate rules should the warrant of arrest be served against De Lima while she’s inside the Senate.

“We go back to basic principles: no arrest during session, no arrest inside the Senate premises. But definitely, with the proper coordination with OSAA (Senate’s Office of the Sergeant-At-Arms), it can be done immediately outside the premises,” Pimentel said on Monday.

De Lima’s ally in the Senate, Liberal Party acting president Senator Francis Pangilinan said they are one with De Lima in questioning the jurisdiction of the regional trial court over her cases.

Pangilinan clarified they will not be making any formal motion and will just support De Lima’s own legal appeals.

“We are questioning the filing of charges before the regional trial court instead of the Ombudsman. We believe the evidence and testimonies against her are not credible, the testimonies who came from drug lords who have just been cleared of charges in connection to their illegal drug activity,” he said in Filipino. (READ: Bilibid inmates cleared of drug charges, turn state witnesses vs De Lima)

De Lima has pending petitions for certiorari and prohibition before the Court of Appeals (CA), which seek to nullify DOJ’s findings.

Solicitor General Jose Calida said under Section 90 of the Dangerous Drugs Act, the DOJ has the jurisdiction to handle the drug complaints against De Lima. It states that “the DOJ shall designate special prosecutors to exclusively handle cases involving violations of this Act.”

Calida also cited the 2004 coup d’etat charges against Senator Gringo Honasan II: “The Supreme Court, in the Honasan case, ruled that the Administrative Code gave the DOJ, as the prosecution arm of the government, the power to investigate the commission of crimes, prosecute offenders, and administer the probation and correction system.“

He added: “Since Senator De Lima is facing drug charges, which has no relation to her office, she should be tried before the regular courts, and not in the Sandiganbayan.”

Vice President Leni Robredo said De Lima’s anticipated arrest is a form of “political persecution” that creates a scary atmosphere for people who oppose the policies of the government.

“If she committed a crime, then they should investigate her, but they have to make sure she will undergo the right procedure. But if there is no case and there’s already a judgement, what is our assurance that she will be afforded the due process of the law?” Robredo said in Filipino during the launch of her anti-poverty program in Cagayan de Oro on Monday.

“Baka magkaroon ito ng chilling effect sa mga taong di sang-ayon sa polisiya ng gobyerno,” she added. (It may give a chilling effect to people who are against government policies.)

Liberal Party senators have earlier slammed the expected release of the warrant since the cases were hinged on the testimonies of high-level inmates before the controversial House hearing on the illegal drug trade inside the New Bilibid Prison.

De Lima earlier said that the DOJ wants to file the cases before a regular court rather than the Office of the Ombusdman to expedite the release of an arrest warrant against her. – with a report from Patty Pasion/Rappler.com