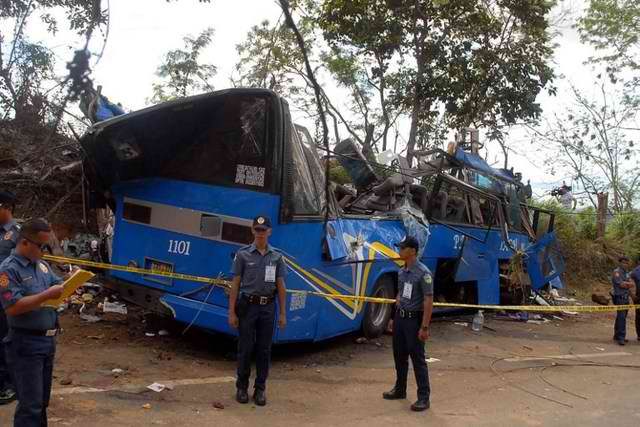 MANILA, Philippines (UPDATED) – A senator and two congressmen have called for an investigation into a bus accident in Tanay that killed at least 15 people, mostly students who were on a field trip.

At the House of Representatives, Makati City 2nd District Representative Luis Campos called for an investigation to determine the criminal liability of the school administrators and the bus company.

1-Ang Edukasyon Party List Representative Salvador Belaro Jr filed Resolution 815, to “look into allegations students were forced to join the Tanay field trip and that the school administration made money from the students’ excursion.”

On February 20, at least 15 people were killed after a bus traveling along Sitio Bayucan in Barangay Sampaloc, Tanay, crashed into an electric post.

The bus was taking around 50 students from Bestlink College of the Philippines to a camping trip in Tanay.

The Commission on Higher Education en banc announced it would impose a moratorium on all field trips and educational tours in all higher education institutions following the accident.

Aquino said he would call representatives of the Department of Education to tell the committee what guidelines govern field trips of primary and high schools.

At the House, Campos also called for an investigation to determine the criminal liability of the school administrators and the bus company.

“We in Congress want answers. Schools are supposed to provide effective guardianship of their students, and guarantee their safety at all times during academic outings,” he said in a statement.

“We are definitely counting on higher education and transport regulators, as well as Camp Crame, to ascertain probable culpabilities, and if warranted, to take the appropriate actions against those who may be held liable for negligence,” he added.

The Philippine Star reported that the Land Transportation Franchising and Regulatory Board is set to issue a 30-day preventive suspension order against Panda Coach Tourist and Transport Incorporated, the bus company involved in the accident.

Belaro, meanwhile noted that the field trip was part of the National Service Training Program, leading him to question the relevance of such activity to the program.

“Schools and teachers have special parental authority over their students on campus and during off-campus learning activities. We want to see how this authority can be exercised better and wisely,” he said in a statement on Wednesday, February 22.