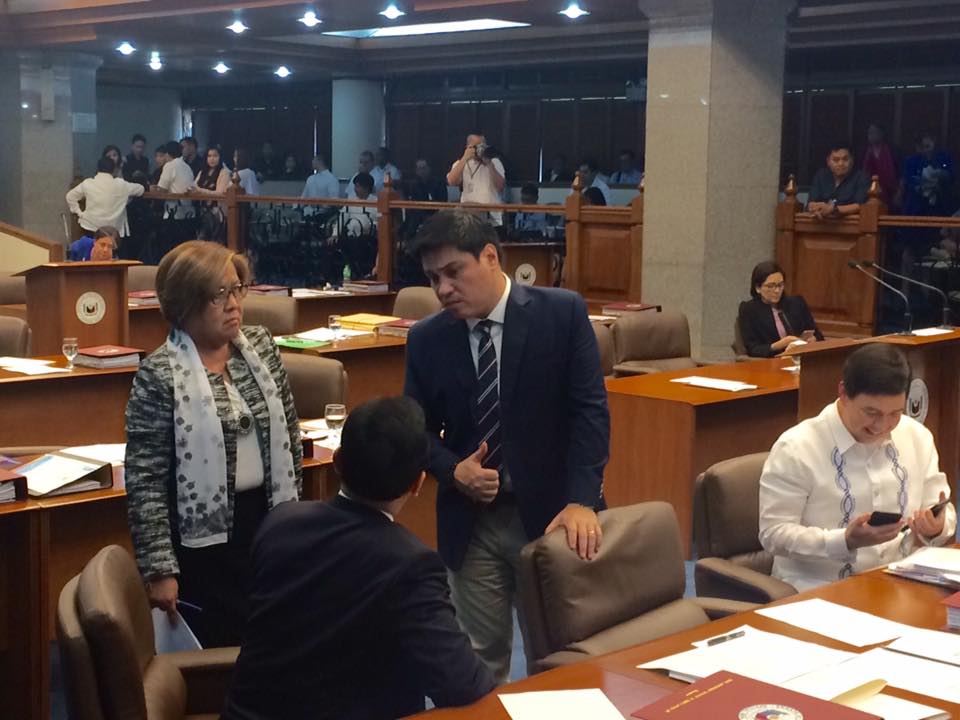 MANILA, Philippines (UPDATED) – The Senate will reopen its investigation into the Davao Death Squad (DDS), following revelations made by retired Davao policeman Arturo Lascañas in a press conference on Monday, February 20.

Two senators confirmed on Tuesday, February 21, they voted and agreed to push through with the hearing on claims about the existence of the DDS. They refused to say how the voting went.

Rappler, however, gathered from various sources privy to the information that as of Tuesday evening, 10 senators voted during their afternoon caucus to reopen the probe.

“There will be a hearing definitely. We only have to clarify the referral either tomorrow (Tuesday) or Monday,” Lacson said.

Senators held a caucus Tuesday afternoon reportedly to discuss Trillanes’ motion to refer the new testimony of the now retired Lascañas to the committee on public order and dangerous drugs chaired by Lacson.

Justice and human rights committee chair Richard Gordon was against revisiting the DDS – consistent with a position he had previously declared in public. Gordon said in several television interviews he is not keen to reopen the investigations, daring the lawyers of SPO3 Lascañas to just take the issue to court.

Disrespect for the Senate

During the caucus, Gordon was reported to have said, “Binabastos ang Senado. ​Walang respeto sa oath (Disrespecting the Senate. No respect for the oath),”​ referring to Lascañas’ testimony before his committee in October 2016 denying the existence of the DDS.

​Gordon said he was a stickler for rules and that he wanted to protect the tradition in the Senate.

A source said Gordon threatened to resign as justice committee chairman, if the probe would be reopened.

​Senate President Aquilino “Koko” Pimentel III was reportedly c​onfident he had the numbers​ and was caught by surprise when those in favor of reinvestigation raised their hands. ​“Aba, marami-rami rin pala (It’s a sizeable number).” ​

During a press conference organized by Trillanes and the Free Legal Assistance Group, the policeman known to be close to Duterte when he was Davao mayor, said members of the DDS were paid from P20,000 to as much as P100,000.

Lascañas’ statement on Monday was a turnaround from his Senate testimony in October 2016, where he debunked the claim of Edgar Matobato, a self-confessed hitman of the DDS, about the existence of the DDS.

Gordon was supposed to deliver a privilege speech Tuesday afternoon after the caucus, but when senators emerged from the caucus and entered the session hall, the session was adjourned abruptly. Gordon was unable to deliver his speech.

​During the caucus, two senators were reported to have said that there must be a reason why a witness (like Lascañas) would change his testimony. It’s possible the first testimony was made under duress and that he was under pressure to say something different. After retirement in December, Lascañas must have had an attack of conscience, the senators said.

Pacquiao said they would hold another caucus tomorrow, Wednesday. Sotto refused to be interviewed on the matter.

Pimentel, Drilon, and even Trillanes were evasive. All that Drilon could say was, “Yesterday (Monday) there was a privilege speech of Trillanes on Lascañas, the speech was referred to the Public Order Committee, that referral stands now, nothing has been changed.”

Asked whether there were attempts to block his referral to Lacson’s committee, Trillanes was mum.

“I really will not say anything, but I feel good,” Trillanes said in Filipino.

For his part, Pimentel said that Senate rules allow for committee members to have a hand in deciding whether Trillanes’ motion would be accepted.

“Senate rules say that if the chair does not act on a certain matter referred to the committee in X number of days, Y number of members can petition that it be heard,” Pimentel said.

Senator Sherwin Gatchalian confirmed he was among those who opposed a reinvestigation. He cited 4 reasons: