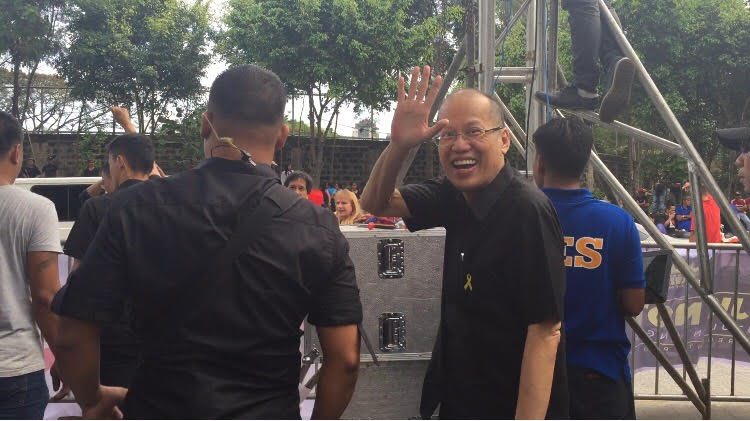 MANILA, Philippines – Former president Benigno Aquino III joined a rally organized by a coalition of 72 groups to remember the 31st anniversary of the EDSA People Power Revolution on Saturday, February 25.

(For a long time what we were doing was to celebrate. Now, we must do more than just remember. We are reminded that the fight is not yet over if we are not ready to fight for our rights.)

The Philippines marks the People Power anniversary this year amid the killing of around 7,000 people in the government’s war on drugs.

As for the rally, it comes a day after Senator Leila de Lima was arrested for drug-related charges against her.

On Saturday, several banners expressing support for the senator were seen around the People Power Monument where the rally is being held.

Pangilinan thanked the attendees for their support but continued to condemn the arrest.

Asked about the pro-Duterte rally set up at the Quirino Grandstand also on Saturday, Pangilinan said it is part of the freedom of the government’s supporters.

The pro-Duterte rally was set at 6 pm. It is expected to be attended by people from the provinces after Interior secretary Ismael Sueno issued a memorandum to mobilize support for the event.

Meanwhile, as of 5 pm, protesters were already packed along White Plains Avenue for the EDSA rally. Millennials again constituted the huge crowd just like the previous anti-Marcos rallies held at the People Power Monument.

Hontiveros lauded the millennials’ participation in the rally.

“They are the new EDSA. They should lead the new EDSA shown in different forms and different expressions,” she said in Filipino. – Rappler.com