After 2 years, Mary Jane Veloso to testify in cases vs recruiters 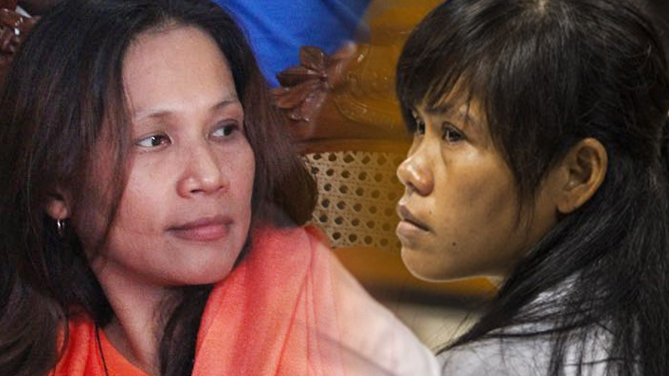 MANILA, Philippines – After nearly 2 years, a Nueva Ecija trial court has scheduled for April 27 the taking of the testimony of Filipino death row prisoner Mary Jane Veloso in Indonesia.

This is in connection with the illegal recruitment and human trafficking cases filed in May 2015 against her alleged recruiters Maria Cristina Sergio and Julius Lacanilao. (READ: The story of Mary Jane Veloso, in her own words)

The National Union of Peoples’ Lawyers (NUPL), in a statement on Saturday, February 25, reported that Presiding Judge Anarica Castillo-Reyes of Sto Domingo Regional Trial Court Branch 88 in Nueva Ecija “denied the latest attempt to delay and stop the taking of Mary Jane’s testimony through deposition.”

Promulgated on February 13, the 4-page resolution of Presiding Judge Castillo-Reyes said that despite several and multiple steps by the accused recruiters over time, “the court has not received or is not aware of any temporary restraining order (TRO) or any writ of preliminary injunction that would prevent the conduct of Mary Jane’s deposition in Indonesia.”

The resolution also cited a circular by the Supreme Court Office of the Court Administrator, mandating trial courts to speed up the disposition of cases of trafficking in persons.

Mary Jane’s deposition will be taken at the Yogyakarta prison in Indonesia, said the NUPL. Judge Castillo-Reyes will be present as an observer, along with NUPL lawyers, state prosecutors from the Department of Justice, representatives of the Department of Foreign Affairs, and the defense counsels of her recruiters, if they are so minded, the NUPL said.

Veloso will be answering “exhaustive written questions prepared by her Filipino private lawyers which will be directly propounded to her by a Philippine consul with the facilitation and cooperation of Indonesian authorities.”

The NUPL said the deposition “will be taken at almost the exact date 2 years ago when Mary Jane was magnanimously granted by the Indonesian government a last-minute standing reprieve from the death penalty.”

This is after “furious and intense efforts and overwhelming clamor to save her life from the gallows.” (READ: How the viral petition to save Mary Jane Veloso reached Indonesian President Widodo)

Lauding the court’s decision, the NUPL said it is “another legal vindication for Mary Jane and the Veloso family.” Finally, the NUPL said, “Mary Jane will be able to freely tell her whole story and cruel ordeal which will be officially considered by the Philippine trial court.”

The group added, “Being the victim, Mary Jane is the most credible and competent witness that could prove not only the guilt of the accused in these Philippine cases but, eventually and more importantly, the full and unabbreviated circumstances that led to her conviction in Indonesia.”

The NUPL also laments the “incessant attempts to delay and stop Mary Jane’s testimony,” saying that there is “nothing to be terrified [of]” in her testimony.

“Tilting the balance on the side of truth is what justice is all about,” the NUPL said. (WATCH: Rappler Talk: The fate of Mary Jane Veloso)

The NUPL added that the Veloso family “prays that no further delays or impediments shall come along the way.”

The NUPL noted that the cases were transferred to Judge Castillo-Reyes following the inhibition of Judge Nelson Tribiana of Sto Domingo RTC Branch 37.

Castillo-Reyes had previously granted the prosecution’s motion to take Veloso’s deposition on August 16, and November 3, 2016, the NUPL said. – Rappler.com