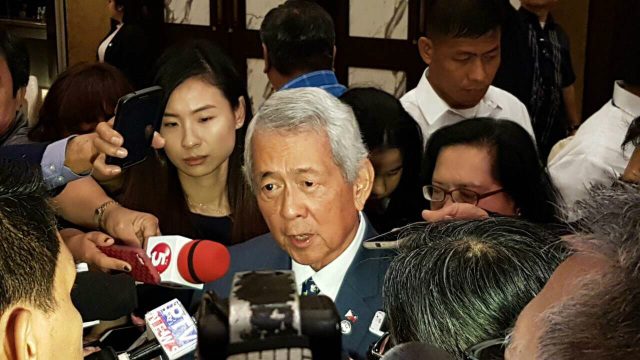 Yasay backpedaled on his statement at the Senate on Wednesday, February 22, that the Philippines merely exercises “legal possession” and not “ownership” of disputed features in the West Philippine Sea.

Speaking to reporters at the Diamond Hotel on Thursday, February 23, Yasay contradicted himself and said that “we own these.”

These disputed features include Pag-asa Island in the town of Kalayaan, which is home to at least 180 Filipinos and has its own mayor.

Yasay made his controversial statement at his confirmation hearing before the Commission on Appointments (CA) at the Senate on Wednesday.

There, Occidental Mindoro Representative Josephine Ramirez Sato categorically asked Yasay about the territorial dispute: “So what is now the official stand or position of our country on this?”

Immediately, Yasay provided a categorical answer: “The official position of the Philippines in so far as certain features – like Pag-asa, that is occupied by us – is that we have possession, legal possession, of this territory, and it can bloom into ownership, it can bloom into part of our territory, when the appropriate arbitral tribunal in international law will be able to make a determination on that basis.”

What is the difference between possession and ownership?

Encyclopedia Brittanica quoted the Roman Law as saying, “Possession is the occupation of anything with the intention of exercising the rights of ownership in respect of it.”

Brittanica explained, “Possession is inchoate or incomplete ownership; it is on its way to become ownership.”

The Philippines’ official position, however, has been clear since at least the time of dictator Ferdinand Marcos: the Kalayaan Island Group in the West Philippine Sea belongs to the Philippines.

In Presidential Decree No. 1596 signed in 1978, Marcos said that Kalayaan “shall belong and be subject to the sovereignty of the Philippines.”

While Yasay said disputed features have yet to “bloom into part of our territory,” Marcos declared as early as 1978 that Kalayaan is “part of the Philippine territory.”

In Republic Act 9522 signed by then president Gloria Macapagal Arroyo in 2009, Arroyo also said the Philippines “exercises sovereignty and jurisdiction” over Kalayaan as well as Panatag Shoal (Scarborough Shoal).

What Yasay correctly said before the CA on Wednesday was that the Philippines’ legal victory against China on July 12, 2016, “is never a ruling on territorial ownership or sovereignty over the disputed area in the South China Sea.”

He added, “And it is on that basis that I’m saying that even while private entities, individuals…legal luminaries have made claims that we own these islands, this is not the official position of the Philippine government, because under international law, we have to prove it in the appropriate tribunal.”

“I personally believe that we own these islands, your honor. I can argue with anybody on the legal arguments as to why, but I am only telling you that the official position, if I may, your honor, the official position of government did not include a categorical claim that we own this in so far as filing our case before the arbitral tribunal is concerned,” he said, seemingly unaware of previous declarations made by past Philippine presidents.

A day after his CA hearing, Yasay clarified in his annual get-together with journalists: “Have we abandoned our claim in so far as our present occupation of some of the features in this disputed territory is concerned? My answer is a resounding no. No, we have not abandoned that at all.”

He also said that the Philippines “will not move an inch in so far as our occupation of these features is concerned.”

Then, like Sato, CNN Philippines reporter JC Gotinga asked Yasay pointblank on Thursday, “Would you state please for us: What is the official position of the Philippine government when it comes to the territorial dispute in the South China Sea?”

Yasay contradicted his answer to Sato on Wednesday that the Philippines merely has “legal possession of this territory” that “can bloom into ownership.”

This is not the first time Yasay contradicted one of his earlier statements.

After the ASEAN foreign ministers’ meeting in July 2016, Yasay became controversial after he flip-flopped on seeking ASEAN’s support for the Philippines’ legal victory against China over the South China Sea.

In Laos, Yasay told reporters that he “never” asked to include the South China Sea ruling in the traditional ASEAN foreign ministers’ statement.

In Manila, however, he said he “vigorously…pushed for the inclusion and mentioning of the arbitral tribunal award” in the joint communiqué. (READ: Recording shows Yasay didn’t want ASEAN to cite Hague ruling)

The Philippines’ top diplomat, who has no previous experience as a diplomat, has yet to be confirmed by the CA.

Yasay is facing other issues, such as claiming he was never a US citizen. – Rappler.com