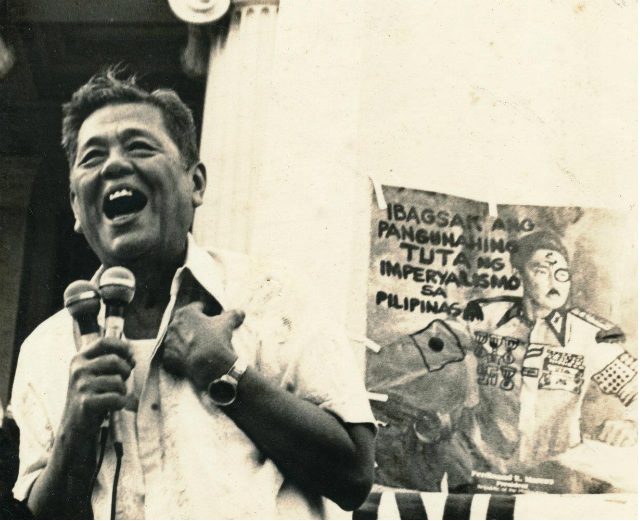 Facebook Twitter Copy URL
Copied
The daughter of the late statesman Jose Diokno says her father would urge Filipinos to 'stand firm, find our voice, and not seal our eyes' against injustices in the country if he were still alive

MANILA, Philippines – It’s been 30 years since the death of senator and human rights defender Jose “Ka Pepe” Diokno, but his vision to make the Philippines a nation for children has yet to be realized, said his daughter Maria Socorro “Cookie” Diokno on Monday, February 27.

During the first leg of the JW Diokno Human Rights Memorial lecture series on Monday, Cookie Diokno denounced the government’s focus on its bloody campaign against drugs and criminality.

“A government that wages war against the country’s social ills but ignores the fundamental economic and political structures that have characterized our country for centuries is, in my father’s words, a travesty of democracy,” said Diokno, also the secretary general of the Free Legal Assistance Group (FLAG).

She added that while the government is bent on eradicating illegal drugs, it has remained “oblivious to the hunger, poverty, unemployment, underemployment, low wages, social injustices.”

Diokno’s father was one of the forerunners of human rights in the Philippines –especially during Martial Law under the late dictator Ferdinand Marcos. Aside from serving as justice secretary under the administration of Diosdado Macapagal, he was also the founding chairperson of the Presidential Committee on Human Rights which later became the Commission on Human Rights.

The statesman died in 1987, a year after the Marcos dictatorship was toppled and democracy was restored. How does one continue the work of Ka Pepe and fufill his vision of a “nation for our children”?

If the former senator were alive today, his daughter said, he would urge people to “stand firm, find our voice, and not seal our eyes.”

The lingering divisiveness, however, could prevent the country from reaching its full potential.

According to Diokno, there is a “need to get together, unite, realize, and accept that we are all Filipinos” if we want to stop injustices happening in the Philippines.

“We need to stop about this being about yellowtards (opposition supporters), Dutertards (the President’s supporters), dilawan, whatever,” she emphasized. “If we begin to get ourselves united and to go back to our core values and decency as Filipinos, turn our backs on all of these things that are happening right now, and stand firm, then maybe we can find the power.” – Rappler.com