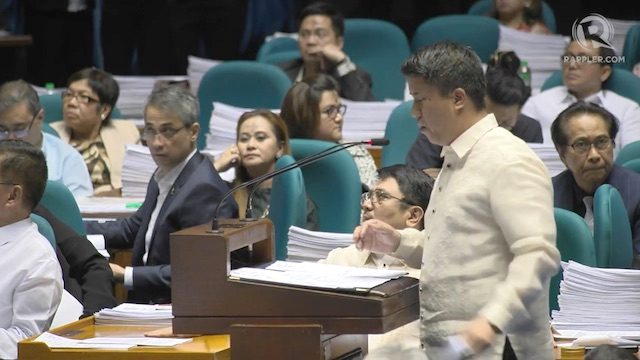 MANILA, Philippines – Not even the last ditch efforts of opposition lawmakers worked to stop the approval of the contentious death penalty measure on 2nd reading at the House of Representatives.

Coincidentally, congressmen gave their nod to House Bill Number 4727 on the same day the Philippines, a predominantly Catholic country, commemorated the start of the Lenten Season on Ash Wednesday.

RANEO ABU, DEPUTY SPEAKER: There’s a motion to approve House Bill 4727 for second reading. Those who are in favor say, ‘Aye.’ Those who are not in favor, say ‘Nay.’

MARA CEPEDA, REPORTING: And the ayes have it. The House of Representatives approves on second reading the controversial death penalty measure through viva voce voting.

The vote follows a two-hour period of amendments, where a majority of congressmen turns down all individual amendments proposed by their colleagues.

But bill sponsor and House justice panel chairperson Reynaldo Umali and the rest of the House reject all of Lagman’s proposals.

MARA CEPEDA, REPORTING: Akbayan Representative Tom Villarin says he is dismayed at the turn of events at the plenary

TOM VILLARIN, AKBAYAN REPRESENTATIVE: Dapat dumaan din sa nominal voting because the 2nd reading is very important eh. Because many could have had objections on certain sections and they can raise those objections before the final vote sa 3rd reading.

(It should have passed through nominal voting because the second reading is very important.)

MARA CEPEDA, REPORTING: But for Umali, all congressmen will get their chance to explain their vote next week, when the bill undergoes through its 3rd and final reading.

MARA CEPEDA, REPORTING: With the second reading vote, HB 4727 now only needs to go through one last stage at the House before it is transmitted to the Senate.

It remains to be seen if pressure from the Church and civil society groups can stop the final passage of the measure at the House.