MANILA, Philippines (UPDATED) – President Rodrigo Duterte on Thursday, March 2, said there would be no “cover-up” in pork barrel scam cases under his watch.

Duterte made the statement while responding to questions on his March 1 meeting with former senator Juan Ponce Enrile, who is facing graft and plunder charges in connection with the biggest corruption scandal in Philippine history.

Asked whether the PDAF scam issue was among the topics that he and Enrile discussed, the President said: “Lalabas talaga ‘yan kasi ano ‘yan eh, hindi mo mapigilan ‘yan (It will really come out because you can’t stop it),” he said.

The media interview took place after the groundbreaking of the Cebu-Cordova Link Expressway in Cordoba, Cebu, the day after his meeting with Enrile in Malacañang.

Asked if Enrile sought his help with his pork barrel cases, Duterte said: “Sa akin? Ako? Maghingi ka ng tulong sa’kin? (From me? Me? Asked help from me?) No, of course not.”

Enrile’s former chief of staff, Gigi Reyes, as well as Senators Bong Revilla and Jinggoy Estrada, have been charged with plunder and graft. Unlike Enrile however, she and the two lawmakers are detained. (READ: ‘The Boss’ and Gigi Reyes)

Duterte also said Enrile offered advice on “so many things” such as the campaign against drugs, national security, and terrorism.

The President said Enrile, a former defense chief, also advised him “to handle more with the proper perspective the approach” in the government negotiations with communist rebels.

Earlier on Thursday, Malacañang downplayed Duterte’s meeting with the former senator, calling it nothing more than a “meeting of two old friends.”

It’s rare for Palace guests to be given a chance to have a 4-eyes only meeting with the President. More often, the President is accompanied by other officials and his aides.

Medialdea also brushed aside the possibility that Duterte and Enrile might have discussed the latter’s plunder and graft charges.

Asked if Enrile might have mentioned his cases, Medialdea said:”I don’t think they will even take it up. Plainly, a meeting of two old friends. That’s all there is to it.” 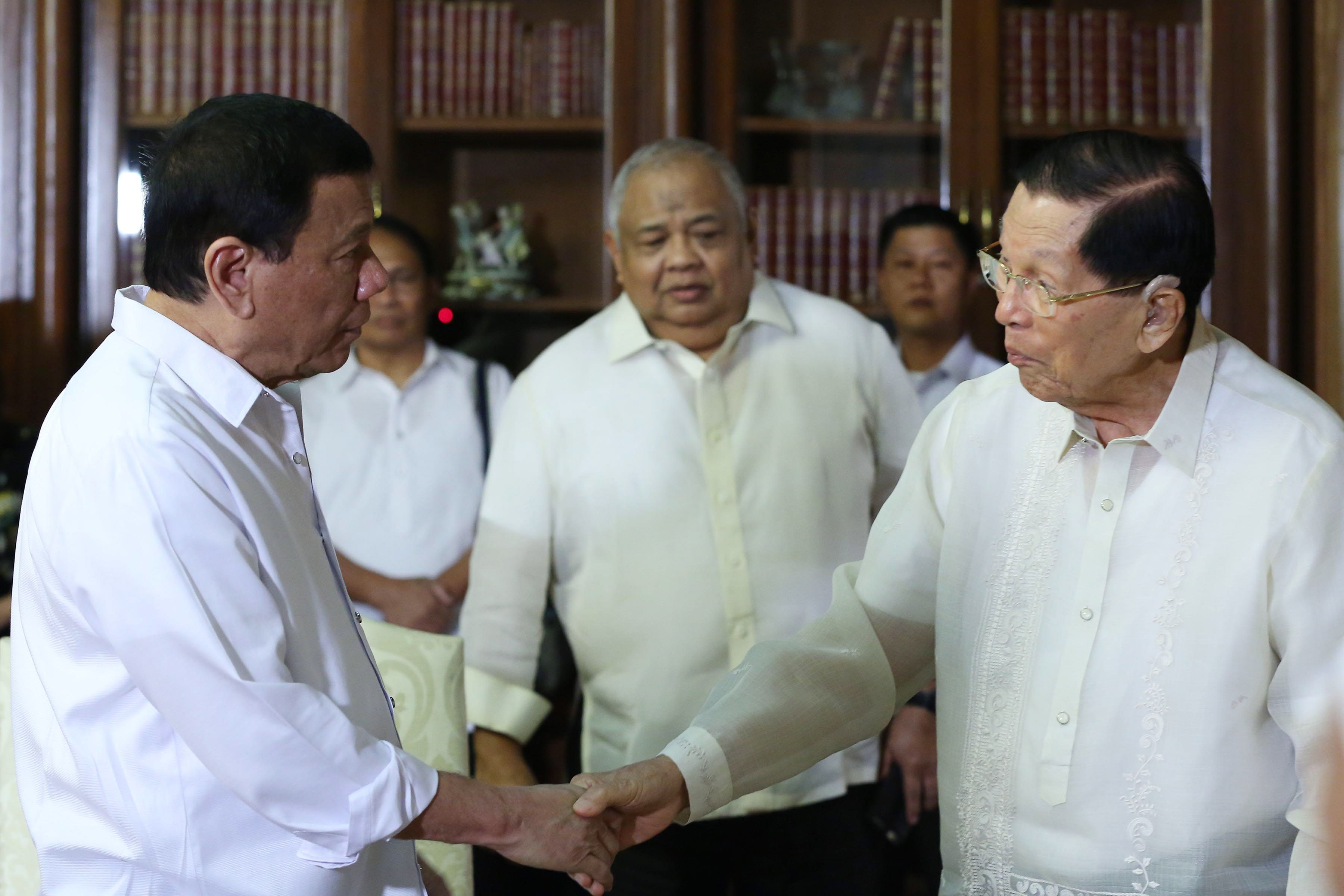 Luy is a state witness in the plunder cases against Napoles.

Enrile is one of 3 senators facing plunder and graft charges over the pork barrel scam, the biggest corruption scandal in Philippine history.

While the recommendation of the Solicitor-General, which is supported by Duterte, does not directly impact the pork barrel cases pending before the anti-graft Sandiganbayan, it could cast doubt on the integrity of Luy’s testimonies which were critical in the building of the cases against Enrile, Napoles, and others.

Though he spent more than a year under hospital arrest, the Supreme Court allowed him to post bail in 2015 due to his age – he was 91 then – and health considerations.

Enrile and Duterte have been friends since the latter was Davao City mayor. Enrile has visited the President’s home in the Matina district. – Rappler.com