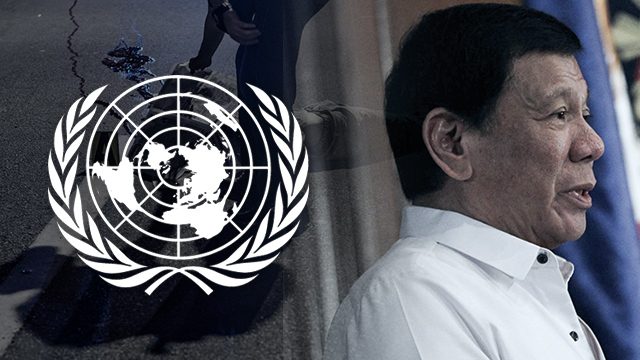 VIENNA, Austria – The UN-linked International Narcotics Control Board (INCB) on Thursday, March 2 condemned the use of extrajudicial killings in the Philippines, where President Rodrigo Duterte’s much-criticised war on drugs has claimed more than 6,500 lives.

Duterte was elected in 2016 after promising to eradicate drugs in society by killing tens of thousands of people. Since June, police have reported killing more than 2,550 people while more than 4,000 others have died in unexplained circumstances. (IN NUMBERS: The Philippines’ war on drugs)

In a new annual report, the INCB said that “extrajudicial action, purportedly taken in pursuit of drug control objectives, is fundamentally contrary to the provisions and objectives” of international drug conventions.

In August the INCB, an independent quasi-judicial body monitoring the implementation of UN drugs conventions, had already called on the Philippines government to ensure an “immediate stop” to the killings.

The new annual report condemned the practice “in the strongest possible terms”, calling it a “serious violation of human rights” and an “affront to the most basic standards of human dignity.”

The INCB made no direct mention of Duterte’s campaign to reinstate the death penalty for drug-related crimes, which this week has cleared a major hurdle.

Late Wednesday a death penalty bill passed a second reading in the lower house. A third and final reading still needs to be held next week but this is seen as a formality.

The INCB said only that its board “continues to encourage States that retain capital punishment to consider the abolition of the death penalty for drug-related offences.”

The INCB also said it “notes with concern the deteriorating safety and security situation in Afghanistan and its impact on the authorities’ ability to monitor and control the illicit supply of drugs originating in the country”.

It said it has observed that the “willingness of the international community to continue providing aid to Afghanistan appears to have been declining, in particular in the area of drug control”.

It said that while drug control efforts are also linked to broader challenges in development and criminal justice, action against drugs “cannot be removed from the equation if sustainable development is to be achieved”.

The report also highlighted a “disproportionate increase” in drug overdoses among women.

Women and girls comprise one third of global drug users, with levels higher in rich countries, but just one fifth of those receiving treatment are women, the report said.

Germany and Serbia have reported that fatal overdoses from prescription drugs are more frequent among women, while Britain and others have seen larger increases in overdoses, of all substances, among women than among men.

Female prisoners and sex workers are also at particular risk of drug use, the INCB said.

Regarding Colombia, it said that the 2016 peace deal between the government and FARC rebels “is expected to have a positive effect on, inter alia, the drug control situation in the country.” – Rappler.com