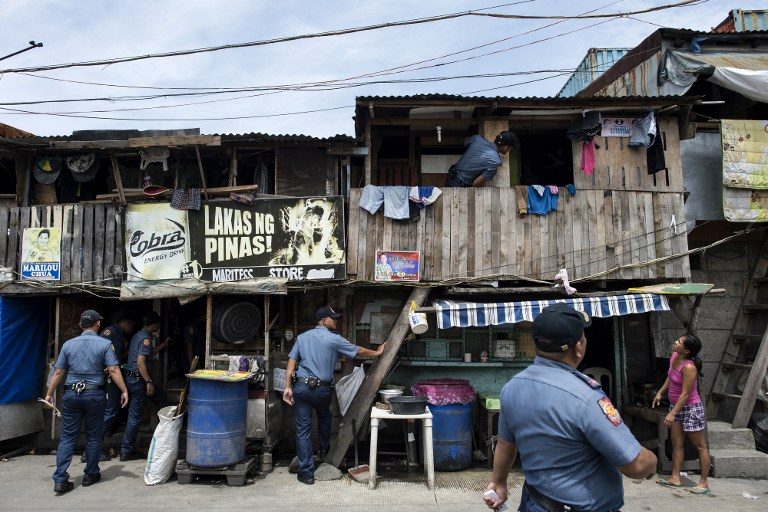 Facebook Twitter Copy URL
Copied
'The Philippine government needs to understand that their problems with the international community will not go away unless these killings stop,' says New York-based Human Rights Watch of the Duterte administration's drug war

MANILA, Philippines – Would you really want to be mentioned in the same breath as North Korea and Syria?

A Human Rights Watch (HRW) official posed this question to the Philippine government as he urged the Duterte administration to understand “that there will be consequences” for the high death toll in its drug war.

“There’s a human rights commission meeting which is starting next week and the Philippines will be high on the agenda. The Philippines will be on the same category as North Korea and Syria and governments like that,” HRW Emergencies Director Peter Bouckaert told Rappler, as HRW launched a report on the role of Philippine police in the killing of drug suspects.

Bouckaert added: “So do you really want to go from one of the most vibrant civil societies in Asia to being in a category with those kinds of criminals? But that’s the future and that’s the risk.”

The New York-based organization said in its report released on Thursday, March 2, that Philippine police were responsible for extrajudicial killings linked to the drug war. It also noted that police planted evidence and faked post-operation reports to justify the killing of suspects allegedly in the conduct of police operations.

In its report, HRW urged Philippine officials to suspend “buy-bust” operations, which are allegedly used as a cover-up for extrajudicial killings. They also called on different government agencies to investigate allegations of killings committed by police themselves.

The suspension of the police’s anti-drug campaign was short-lived. After 4 weeks, or a few days before HRW report was released, Duterte allowed the return of police to the drug war.

HRW also called on the Philippines’ foreign donors to withhold “any financial assistance, training programs, weapons sales, and capacity-building programs with the Philippine National Police” until the drug war is fully suspended and investigations begin.

It also the made the following recommendations to foreign donors, including the United States, the European Union, Japan, the World Bank, and the Asian Development Bank:

HRW also called on the US, a long-time ally of Philippine police, to make the following adjustments:

The Duterte administration has been largely dismissive of the HRW probe, calling it “thoughtless and irresponsible.” Hours after the report was released, Duterte said in a public event that there will be “more killings” in his drug war.

It’s a response HRW expected. After all, Duterte, a long-time mayor of Davao City, is known for his tirades against foreign government, organizations, and even world leaders who criticize his vaunted anti-crime campaign.

“We know exactly what the response of the Filipino authorities will be. They will say that we are a bunch of foreigners trying to meddle in the affairs of the Philippines. Well, we’ve been investigating the drug war for the last 20 years. We were here during martial law. We’ve been protecting the rights of the people of the Philippines for all that time and we will continue to do so under Duterte,” said Bouckaert.

He said HRW usually provides advance copies of its reports to concerned governments, which are asked to respond “because we’re interested in having a dialogue.” This, however, was not the case in its report on the Philippines under the Duterte administration.

“We only do that when we think the government is genuinely interested in telling the truth. And in the case of the Philippines, the government right now…we don’t think it is possible to have that kind of dialogue,” Bouckaert told Rappler. – Rappler.com