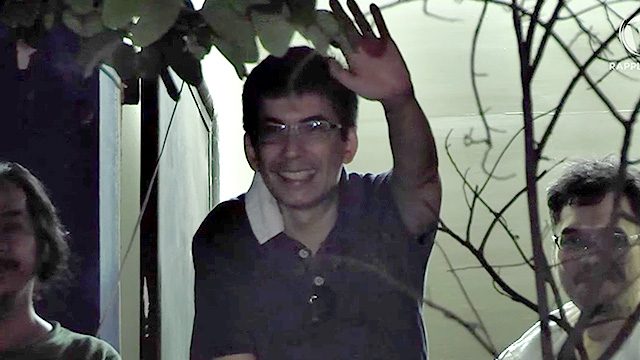 A video taken at Camp Karingal on Thursday showed Manalo, clad in a blue shirt and black pants, approaching the gate to greet supporters who came to see him.

Another video posted by Rappler late Thursday showed supporters asking Manalo, “Kamusta po kayo diyan (How are you there)?”

A smiling Manalo waved from a balcony and replied, “Baka mapagod po kayo (You might get tired).” Supporters then told him to get some rest after a long day.

Manalo was arrested on Thursday, hours after policemen entered the INC compound where his house was located, supposedly armed with a search warrant. (READ: ‘Dapa, dapa, dapa!’ Cops drive Manalo siblings out of Iglesia compound)

Police, however, failed to produce a search warrant when they barged into the Manalos’ house on Thursday, according to Angel’s wife, Jenny.

On Thursday, one supporter expressed her concern regarding the conflict at 36 Tandang Sora. Connie Santos said she cannot understand why Manalo and his family had to go through “oppression” and “pressure.”

(The Manalos, then, have the right to live there all the more because they’ve been living there since the time of Eraño Manalo. That right was taken away from them, and their human rights were violated.) – Rappler.com