De Lima to Duterte, ‘blind’ followers in drug war: Your time will come 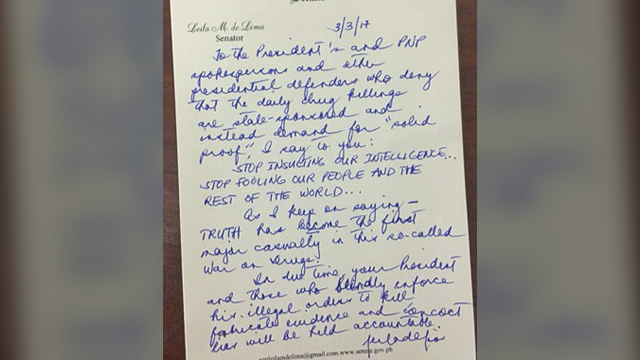 MANILA, Philippines (UPDATED) – Even in jail, Senator Leila de Lima continues to call out the spokespersons of President Rodrigo Duterte and the Philippine National Police (PNP) for their repeated denial of state-sponsored extrajudicial killings.

In a note she wrote in her cell at the PNP Custodial Center in Camp Crame, images of which were released to media on Friday, March 3, the detained senator also said that “in due time,” Duterte and his “blind followers” in his drug war would be held accountable for their actions.

De Lima was reacting to the statements of Presidential Spokesman Ernesto Abella and PNP spokesman Senior Superintendent Dionardo Carlos in response to a Human Rights Watch report released on Thursday, March 2, that tagged the PNP as behind extrajudicial killings in the war on drugs.

“To the President’s and PNP’s spokespersons and other presidential defenders who deny that the daily drug killings are state-sponsored and instead demand for solid proof, I say to you: Stop insulting our intelligence. Stop fooling our people and the rest of the world,” De Lima said in her letter dated March 3.

“As I keep on saying – TRUTH has become the final major casualty in the so-called war on drugs,” she added.

De Lima told “the President’s defenders” that Duterte and his blind followers in the police force would have to face the music at the right time.

“In due time, your President and those who blindly enforce his illegal orders to kill, fabricate evidence, and concoct lies will be held accountable,” she said.

PNP spokesman Senior Superintendent Dionardo Carlos also refuted the international rights group’s claim that the war on drugs is a “war against the poor.” (READ: PNP to Human Rights Watch: Show evidence to back allegations)

“She should instead write to herself and tell herself to stop fooling herself and the people….She should accept reality and the truth that she created the rut she is now in. She is paying a karmic debt,” Panelo said in a statement.

HRW Emergencies Director Peter Bouckaert told Rappler that the Philippine government should understand the “consequences” of the rising killings in its drug war. (READ: HRW: PH risks being lumped with North Korea, Syria)

De Lima has repeatedly denounced the killings linked to Duterte’s bloody campaign against drugs, which has killed over 7,000 people to date. She initiated a Senate probe into the deaths when she headed the Senate justice committee, just was later ousted as chair.

The senator is detained in Camp Crame, the police headquarters, for drug charges she claimed were fabricated to “silence” Duterte’s fiercest and most vocal critic. (READ: TIMELINE: De Lima – from drug probe to arrest) – ‪Rappler.com‬