Mar 4, 2017 3:17 PM PHT
Paterno Esmaquel II
Facebook Twitter Copy URL
Copied
'In the unfortunate event that I die in prison, you all know who my murderer is,' Senator Leila de Lima says 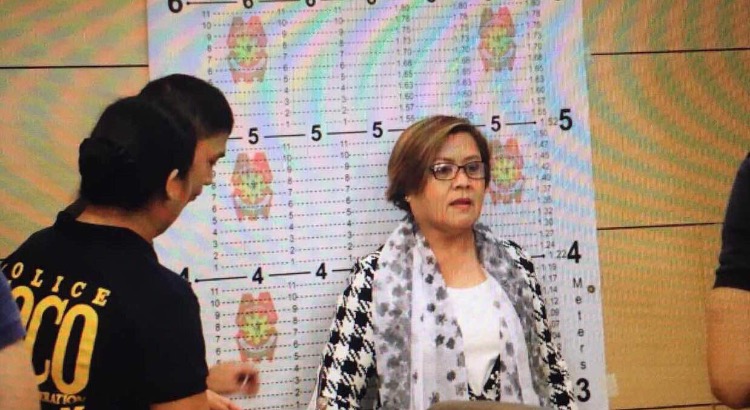 De Lima is detained at the Philippine National Police (PNP) Custodial Center in the PNP headquarters, Camp Crame, after she was arrested on drug charges.

“Because of these fake news as reinforced by Duterte’s sycophants and lapdogs in government and social media, I no longer feel secure in detention, despite being guarded by the PNP Custodial Unit here in Camp Crame,” De Lima said in a statement on Saturday.

She said this fake news was “reinforced” by the statement of a Duterte ally, Speaker Pantaleon Alvarez, that she “should be detained in a mental hospital instead of the PNP Custodial Center.”

“These fake ‘alternative fact’ news are making the rounds and being encouraged by Duterte’s lapdogs, such as Speaker Alvarez, in order to condition the minds of the people that the worst can happen to me while in detention at the PNP Custodial Center, without any fault of the Duterte regime because I supposedly already lost my mind after my arrest,” she said.

De Lima issued this statement after fake news website abs.cbn-tv.com, among others, said that she “has been hospitalized after attempting suicide.” (The real news website of ABS-CBN is news.abs-cbn.com.)

In her statement, De Lima also pointed out that Duterte is accused of having his political opponents assassinated. Retired Davao policeman Arturo Lascañas, for one, said that Duterte ordered the killing of radio commentator and Duterte critic Jun Pala in 2003.

“If I die inside Duterte’s prisons, it is not because I committed suicide, but it is because the President has finally ordered me killed. In the unfortunate event that I die in prison, you all know who my murderer is,” the senator added.

De Lima said she “will never contemplate suicide” because she looks forward to the end of “the barbarity and tyranny of this regime,” as well as her release from prison.

“I have never been more determined to continue the fight against this murderous, incompetent, and corrupt regime,” she said.

Since she was detained on February 24, De Lima has stood defiant against Duterte, as she drums up international support for her cause.

One of the international groups supporting De Lima is the ruling Swedish Social Democratic Party, which condemned De Lima’s arrest.

The Swedish Social Democratic Party said De Lima’s arrest “is unacceptable.” It  “cannot be seen as anything other than that the government uses its powers improperly to those who oppose its policies,” the party added.

“The Swedish Social Democrats therefore call for her release immediately,” they said. – Rappler.com