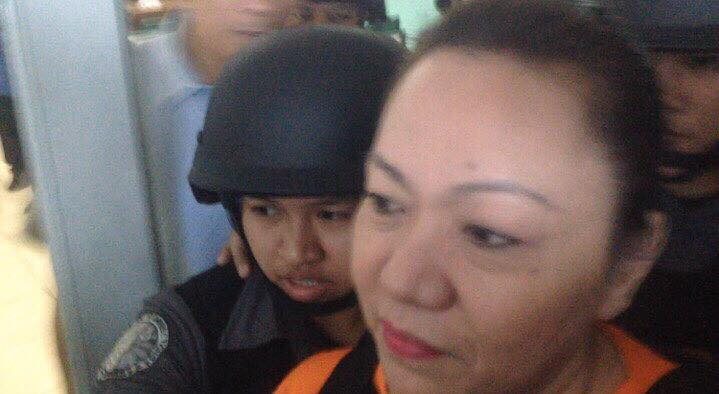 Napoles attended her pre-trial for graft and plunder charges at the Sandiganbayan on Monday, March 6, where she questioned the reopening of the case against her.

(No illegal detention happened. It was just a case of extortion because the DOJ already dismissed the charges against me.)

Napoles claimed that De Lima, who was justice secretary in 2013, was one of the people who tried to extort money from her. She did not explain how the alleged extortion happened and did not specify the amount of money supposedly involved.

The serious illegal detention case was filed by whistle-blower Benhur Luy, an employee of Napoles, who said he was detained at a retreat house and later at a condominium unit in Taguig to stop him from exposing the pork barrel scam.

The DOJ, then under De Lima, dismissed the serious illegal detention case on June 10, 2013, owing to a letter Luy allegedly sent his parents saying he was not being held against his will.

A month later, in July, the National Bureau of Investigation (NBI), then under director Nonnatus Rojas, filed a motion for reconsideration before the DOJ questioning Luy’s letter, and seeking to reinstate the charges against Napoles.

De Lima granted the motion, and the charges were then filed before the Makati Regional Trial Court (RTC).

Napoles was convicted by a Makati RTC on April 14, 2015 and sentenced to up to 40 years in prison.

De Lima, in a statement on Monday, rejected Napoles’ allegation and described her as a “polluted source” and “pathological liar.”

“  Napoles has the propensity to lie, being the mastermind of the PDAF scam that funneled billions of public funds to the pockets of legislators and executive officials,” the senator said.

“When asked who among the senators and congressmen were her clients, she asked it depends on whom we wanted implicated. That is when I knew that Napoles is a liar and will lie and say anything to save herself and keep the money she stole from the government,” De Lima also said.

“I refused to be her handler because she is a criminal, convicted for kidnapping and charged with plunder, and because she is a pathological liar. I will not be surprised if her present government handlers are now telling her what to say and who to implicate in exchange for her liberty which has already been promised her by the Solicitor General.”

De Lima’s lawyer Alexander Padilla also questioned the timing of Napoles’ statement and accused her of forging a deal with the Duterte administration.

“Her statements are useless clutter and absolute garbage. First, it’s emanating from a convict and next, why only now? Is it in exchange [for] the favor being done by the government, through the Office of [the] Solicitor General, that they will move for her acquittal?” Padilla told Rappler in a text message.

Solicitor General Jose Calida recently filed a manifestation before the Court of Appeals, saying Napoles was not guilty of serious illegal detention. Responding to criticism, Calida denied the government had struck a deal with Napoles. (READ: Soft on Napoles? Duterte gov’t just upholding ‘rule of law’)

De Lima, the fiercest critic of President Rodrigo Duterte, had described Calida’s move as “suspicious,” adding that the government seems “bent on taking the side of every high-profile crook and scoundrel the past administration was able to jail.” De Lima herself is now detained over drug charges which she claims were fabricated by Duterte and his allies.

Napoles attended her court hearing on Monday along with detained former senator Jinggoy Estrada, the primary accused in the graft and plunder case. – Rappler.com