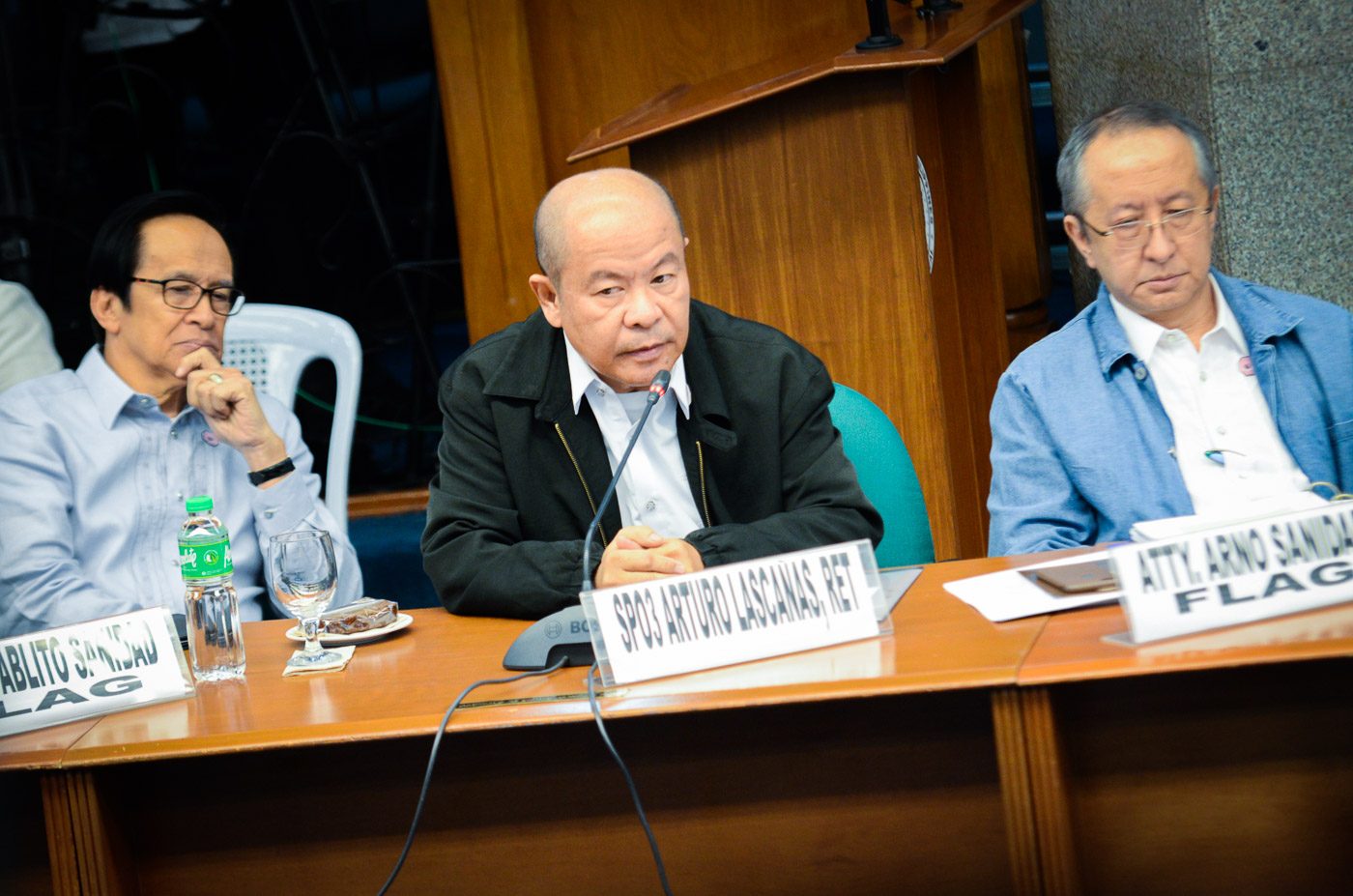 MANILA, Philippines – Two senators on Monday, March 6, came face to face with lawyers who gave them hell at some point in their lives and who are now defending self-confessed Davao hitman retired SP03 Arturo “Arthur” Lascañas.

Lawyers Pablito and Arno Sanidad, brothers who co-founded the Free Legal Assistance Group (FLAG) under the Marcos regime, appeared with Lascañas on Monday as part of his legal team in his testimony on the alleged involvement of President Rodrigo Duterte in the Davao Death Squad (DDS).

It took Senator JV Ejercito, son of deposed president and now Manila Mayor Joseph “Erap” Estrada, to finally say what has been apparent since the start of the hearing: that the brothers Sanidad, along with other FLAG lawyers helping Lascañas such as La Salle Law Dean Jose Manuel Diokno, were the private prosecutors in the impeachment trial of Estrada in December 2000.

“Kulang na lang dito si Simeon Marcelo para kumpleto na ang cast noong 2001 (The only one missing is Simeon Marcelo to complete the cast back in 2001), when President Estrada was impeached,” Ejercito added.

Ejercito was referring to the historic impeachment trial of his father that began in December 2000 following the exposé of gambling lord Luis “Chavit” Singson.

Estrada left Malacañang and Gloria Macapagal-Arroyo took her oath as his successor when protesters gathered on EDSA in late January 2001 in reaction to apparent attempts to cover up evidence at the impeachment trial. The Sanidads, Diokno, and Marcelo were among the battery of top-notch private sector lawyers who helped members of the House of Representatives prosecute Estrada in that trial. Marcelo became Ombudsman after that, and he is now with the Cruz Marcelo & Tenefrancia law office.

Ejercito said that seeing the Sanidad brothers on Monday felt like “deja vu.” He asked Arno Sanidad to confirm that he indeed was part of the Estrada prosecution team and among the lawyers of Singson. (READ: Meet Lascañas’ battle-tested lawyers)

“I don’t understand your question,” Sanidad told Ejercito, who repeated it.

Sanidad agreed, saying they were indeed the lawyers of “Chavit.”

Ejercito hinted that the Sanidad brothers were part of a “plot” to destabilize his father’s administration.

“We are here for the truth. We don’t want the Senate to be used for any destabilization plot. This has happened before,” the senator said.

Several senators had accused Lascañas of being used by critics of President Rodrigo Duterte to destabilize the government.

“We are here as lawyers,” Sanidad said.

Sanidad also volunteered another fact: that he also filed charges against then police general Senator Panfilo Lacson over the alleged Kuratong Baleleng rubout.

The Kuratong Baleleng is a robbery group that was allegedly summarily executed along Commonwealth Avenue in 1995 by Lacson’s men when he was the chief of the Presidential Anti-Organized Crime Task Force (PAOCTF) under the Ramos government. Murder charges over the alleged rubout of Kuratong Baleleng haunted Lacson for years. The case was junked, revived, and shelved but kept cropping up through the years.

It was a prolonged legal battle between Lacson and his group and the Office of the Solicitor General – from the lower court, to the Court of Appeals and finally, the Supreme Court.

In 2013, the Supreme Court junked the case with finality. – Rappler.com