4 death penalty votes that surprised us 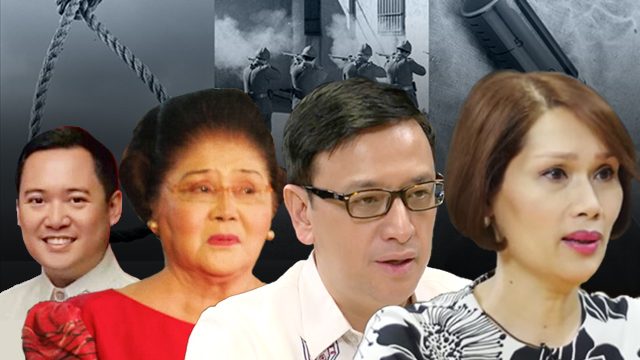 Facebook Twitter Copy URL
Copied
Some representatives voted contrary to their previous public statements or their party stand. What made them change their mind?

MANILA, Philippines – The passage of the controversial death penalty bill at the House of Representatives is expected, since more than 260 congressmen are allied with President Rodrigo Duterte.

During the 3rd and final reading of House Bill 4727 on Tuesday, March 7, a total of 217 lawmakers voted yes, while only 54 congressmen said no and one abstained. (LIST: How congressmen and women voted on the death penalty bill)

Still, the votes of several representatives came as a surprise, either because their vote was a turnaround from a previous public statement or their final stand was contrary to the position of their political party. 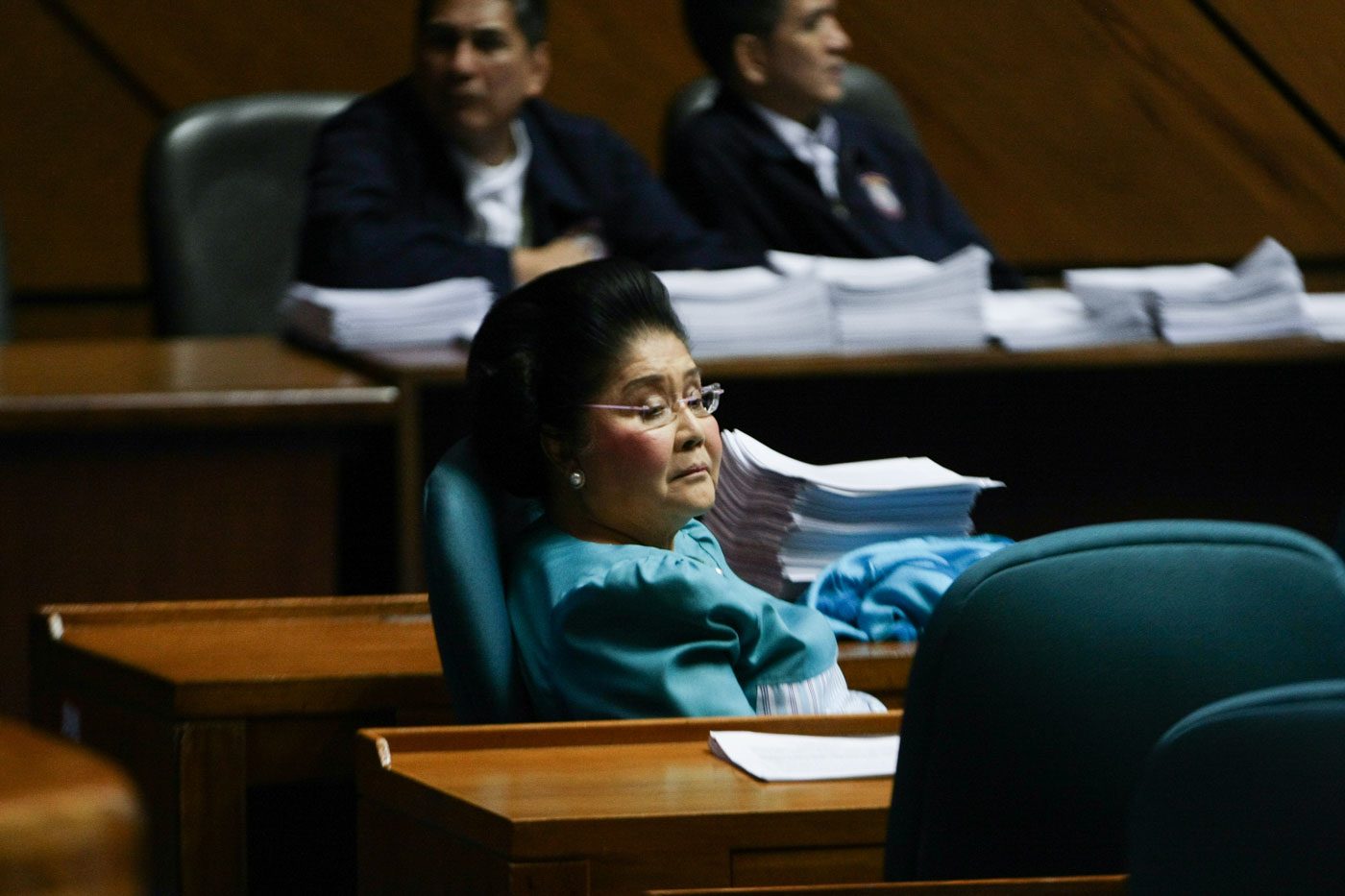 When the House secretariat called the name of Ilocos Norte 2nd District Representative Imelda Marcos to ask for her vote, the lawmaker gave a thumbs down sign. Marcos voted against reimposing the death penalty for drug convicts.

Interestingly, her husband and the late dictator Ferdinand Marcos allowed the death penalty for 24 crimes during Martial Law.

According to the Philippine Center for Investigative Journalism, a total of 31 executions occurred during Ferdinand Marcos’ 21-year rule: 19 during the pre-Martial Law period and 12 during Martial Law.

In 1972, Jaime Jose, Basilio Pineda, and Edgardo Aquino were executed via electric chair for the gang rape of movie star Maggie dela Riva.

In 1973, Chinese drug lord Lim Seng was executed through a firing squad.

The executions stated above were shown on national television. The once-ruling Liberal Party (LP) is against the revival of the death penalty. Still, party stalwarts said they would not be imposing any sanctions on members who would vote in favor of HB 4727.

Among the LP members who said yes to the death penalty bill was Marikina 2nd District Representative Miro Quimbo. As deputy speaker, Quimbo is the highest ranking LP official in the House.

According to Quimbo, he and his colleagues at the LP had been discussing the matter “for quite sometime now.” He said it was initially clear to the party that they would be against HB 4727 when the penalty of death was mandatory.

“That was a deal breaker for many of us,” he said.

“While a great number of us were open to the reimposition of the death penalty, we were only willing to consider it if judges were given the discretion whether to impose it or not, and after a careful and personal examination of the circumstances of the offender, the victim, and social environment. That’s how it is in the US justice system. That’s how it was 10 years ago under our Revised Penal Code,” added Quimbo.

He said that when the majority bloc eventually decided to remove the mandatory penalty of death, “the discretionary nature of the imposition got me to finally support it.”

“I believe that with the advent of many crimes taking place today, including state sponsored extra judicial killings, a more retributive justice system must be put in place. The judicial system is far from being perfect. We must likewise address that,” explained Quimbo.

According to him, the LP does not impose its party position on members because it is “true to libertarian tradition.”

“We decided as a party that people may vote on the basis of their own personal conviction. That is clear. If the party itself cannot protect a party member’s right to freely follow his beliefs, how then are we to convince the public that we can defend theirs?” said Quimbo.

“Besides, the LP has never been a one issue party. The loyalty of a member is not determined simply with one vote. The party, much smaller than what it was a year ago, will continue to fight for things that are most important to it – a just, free and equitable society where people can freely express their view without consequences. It is still the same party that will continue to oppose the return of authoritarianism and the continuing blood bath of extra judicial killings.” he added. 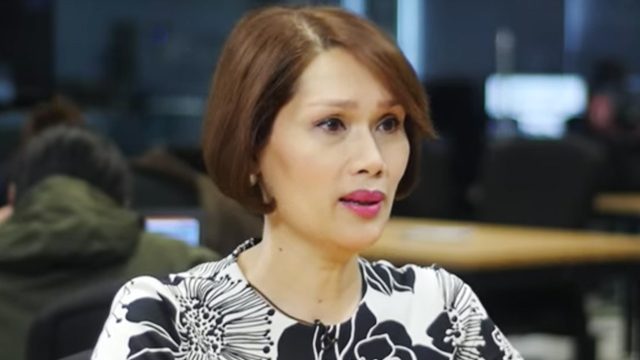 Another LP lawmaker who voted in favor of the death penalty was Bataan 1st District Representative Geraldine Roman.

Roman was in the list of 25 anti-death penalty legislators who were supposed to interpellate HB 4727’s sponsors.

But in the end, she said yes to giving judges the option to punish drug convicts with either life imprisonment or death.

A somber-looking Roman explained her yes vote to Ateneo Law School students in a forum on Wednesday, March 8. A video of her explanation was posted by Twitter user @IronManams.

Cong. Geraldine Roman on why she said YES to the Death Penalty pic.twitter.com/YFNxNDnTIJ

She shared shortly before the vote at the plenary, she had conducted a survey among her constituents to explain to them “all aspects” surrounding the reimposition of the capital punishment.

“Shortly before the voting, I conducted a survey among my constituents, hoping that I will have the perfect alibi for the House leadership for my decision then to vote against the death penalty. But 85% of my constituents voted in favor. I explained to them all the aspects that surround the death penalty…but to no avail. Is it about me and my personal convictions or is it about the people that I represent?” said Roman.

She said her hands were tied following Speaker Pantaleon Alvarez’s threat to replace House leaders who would be voting no, abstain, or be absent during the vote.

Roman explained that she also had her other advocacies to consider.

“What about my other advocacies? Should I have held on to a sinking ship and ran along with me and my constituents and my advocacies? Try and understand my situation,” she said.

Roman is a champion for the Anti- Sexual Orientation or Gender Identity Discrimination Act. The first Filipina transgender congresswoman even went to the Senate recently to hand roses to senators opposing the anti-discrimination bill. Nograles said at the time that while his family supports the Duterte administration, they are also “pro-life.”

But Nograles had a change of heart roughly a month later. He said in a statement that he initially said no to HB 4727 when its earlier versions automatically punishes perpetrators of 21 crimes with death.

“House Bill Number 4727 reduced the number of crimes and the penalty of death is only an option to aggravating circumstances. With this, I think that the death penalty measure that we passed is compliant with my personal position on the death penalty,” said Nograles.

“I support President Duterte’s hardline stance against drug trafficking so with the exclusive coverage of drug-related offenses in the proposed death penalty law, i find no reason to oppose it. I’ve listened to both sides and i think that the final outcome of the proposed death penalty law is a good compromise vis-a-vis my personal beliefs on this particular issue,” he added.