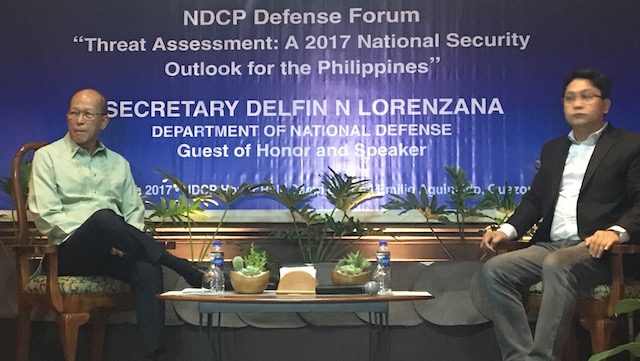 MANILA, Philippines – China was set last year to build on Scarborough Shoal but the US was able to stop the plan, Defense Secretary Delfin Lorenzana revealed on Thursday, March 9.

Manila publicly protested the presence of Chinese ships near the disputed shoal off the coast of Zambales province even as the country was at that time forging warmer ties with the Asian military superpower.

Lorenzana said the US has communication lines with China, allowing the two countries to discuss developments in the region.

The South China Morning Post, citing an unnamed source close to the People’s Liberation Army, reported in April 2016 that China planned to establish an outpost on Scarborough Shoal.

The report said the planned outpost would have allowed Beijing to “further perfect” its air coverage across the South China Sea, suggesting it plans to build an airstrip.

Scarborough, a red line for PH

Lorenzana gave assurances to the public that the Philippines will not abandon its claims over the maritime territories, amid President Rodrigo Duterte’s repeated statements that he would not bring up the issue for the meantime to improve the country’s overall ties – especially trade and economic relations – with the regional giant. (READ: Duterte thanks China’s Xi Jinping for ‘loving’ PH)

“There is a misperception among us, the Filipinos, that the President set aside the ruling. That is not true. He said, ‘Huwag lang natin pag-usapan (Let’s not talk about it) for a while… to allow our people to go back to their livelihood,” Lorenzana said.

Filipino fishermen were allowed back to the shoal after Duterte’s state visit to China last year.

The defense chief said the Scarborough Shoal is a red line for both the US and the Philippines.

“Once the Chinese starts exploring ang putting rigs there, I am going to talk to them,” Lorenzana said.

The Permanent Court of Arbitration declared Scarborough Shoal a common fishing ground for fishermen from the Philippines, China, and neighboring countries. It did not decide on the ownership of the shoal, however, because that matter is not part of its jurisdiction. – Rappler.com