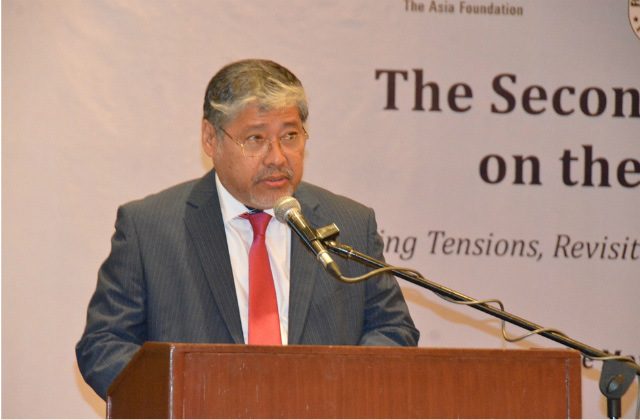 MANILA, Philippines – The Philippines’ new top diplomat, Enrique Manalo, assured Filipinos that the Department of Foreign Affairs (DFA) will continue serving the public after the controversies that hounded his predecessor, Perfecto Yasay Jr.

“The DFA is here, it’s working, and we’ll continue to serve the people,” the seasoned career diplomat said on Thursday, March 9, in his first media briefing as acting DFA chief.

Manalo was asked about his message to Filipinos after the DFA “was in the news for several days” because of questions on Yasay’s US citizenship.

Manalo’s appointment came after the Commission on Appointments on Wednesday, March 8, rejected Yasay because lawmakers said he lied about his US citizenship and US passport.

Manalo told reporters, “Well, the DFA will be continuing to do its job. Yesterday is already history.”

Manalo, who has worked at the DFA for nearly 4 decades, is one of the Philippines’ most respected career diplomats. He was previously DFA undersecretary for policy and former Philippine ambassador to the UK, among others.

The new DFA chief is also the son of diplomats.

His father, the late Ambassador Armando Manalo, was a former journalist and ambassador to Belgium. His mother, Ambassador Rosario Manalo, was the first female career diplomat of the DFA.

Manalo’s immediate predecessor, Yasay, had zero diplomatic experience before heading the DFA. Yasay is a lawyer.

For now, however, Malacañang is not inclined to keep Manalo as DFA chief for the rest of Duterte’s term. The Palace called Manalo “an excellent transition man.”

Duterte earlier said he will appoint his running mate, long-time politician Senator Alan Peter Cayetano, as the Philippines’ top diplomat by May, the end of the one-year ban on appointing defeated candidates.

In any case, Manalo vowed that the priorities of the DFA “remain the same.”

Asked if there will be changes in the Philippine government’s stance on key issues, he said, “We’ll continue our present policy.” It is the DFA’s priority, he said, “to promote the interest of our country.”

He also said Yasay gave “lots of tips” when they met early on Thursday.

“His biggest tip was… to do our job with integrity and to maintain our professionalism in the department, and to always have the interest of the country at heart,” Manalo said. – Rappler.com