Briones gets CA nod amid questions on health 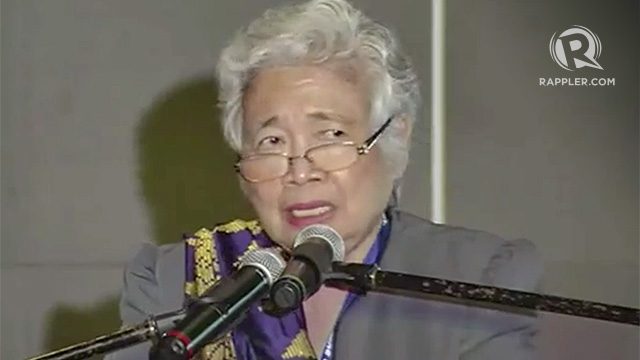 Facebook Twitter Copy URL
Copied
'There is no correlation between the state of my knees and the state of my brain,' 76-year-old Education Secretary Leonor Briones tells the Commission on Appointments

MANILA, Philippines – The Commission on Appointments on Wednesday, March 15, confirmed the appointment of 76-year-old Leonor Briones as the Department of Education (DepEd) secretary, despite some CA members questioning her health.

It was Senator Paolo Benigno Aquino IV, chairman of the CA education committee, who moved for Briones’ confirmation.

“Based on her accomplishments alone, she is qualified for this job. In my personal experience over the past 8 months [as Senate education committee chair], I can say she truly is a champion for education,” Aquino said.

Senate President Pro-Tempore Ralph Recto seconded the motion to confirm his former professor at the University of the Philippines.

“She never changes views just to get into power. She tells truth to power,” Recto said.

Briones’ confirmation hearing lasted nearly 5 hours, after CA members grilled her on her physical fitness as well as DepEd programs.

A Teacher Representative Julieta Cortuna pointed out that Briones is unable to attend flag ceremonies, and she also failed to visit teachers on the ground after the onslaught of Typhoon Nina (Nock-ten) in December 2016.

Cortuna also said she received complaints from DepEd directors about the use of their lounge as sleeping quarters.

In response, Briones said converting the lounge is a way for them to cope with traffic problems, as the DepEd main office is located in Pasig City while she resides in Fairview, Quezon City.

She added it was only a “temporary arrangement” and that the use of the lounge is not exclusive to her.

Cortuna, however, refused to accept Briones’ reason, saying she herself travels daily from her home in Parañaque to Batasang Pambansa in Quezon City.

“It’s not an excuse for me. It’s not negotiable for me that the traffic is the reason why you have to convert that office. Kung ‘yan ang mangyayari, lahat tayo dito magpapagawa na ng tulugan sa opisina using government funds (If that’s what will happen, all of us here will convert our offices into sleeping areas using government funds),” the lawmaker said.

Weak knees but not weak brain

Apparently anticipating it would be raised, Briones already addressed the issue of her physical fitness in her opening statement before the CA panel.

She defended her use of a wheelchair whenever she travels by plane, saying that while she has weak knees, she does not have a weak brain.

“It’s true that I use a wheelchair whenever I travel by plane. But everybody I’m sure here agrees that there is no correlation between the state of my knees and the state of my brain, as well as the capacity to analyze challenges, whether these be related to education, to finance, to politics, and the economy,” she told the CA committee.

“I’m sure and I’m confident that if at that time there was a Commission on Appointments, his appointment would have been approved readily, wheelchair notwithstanding,” she said.

In the past 6 months, Briones said she made 13 regional visits to disaster-stricken areas and had taken all forms of transportation. She also attended a meeting in Indonesia and an APEC meeting of education ministers in Peru. – Rappler.com