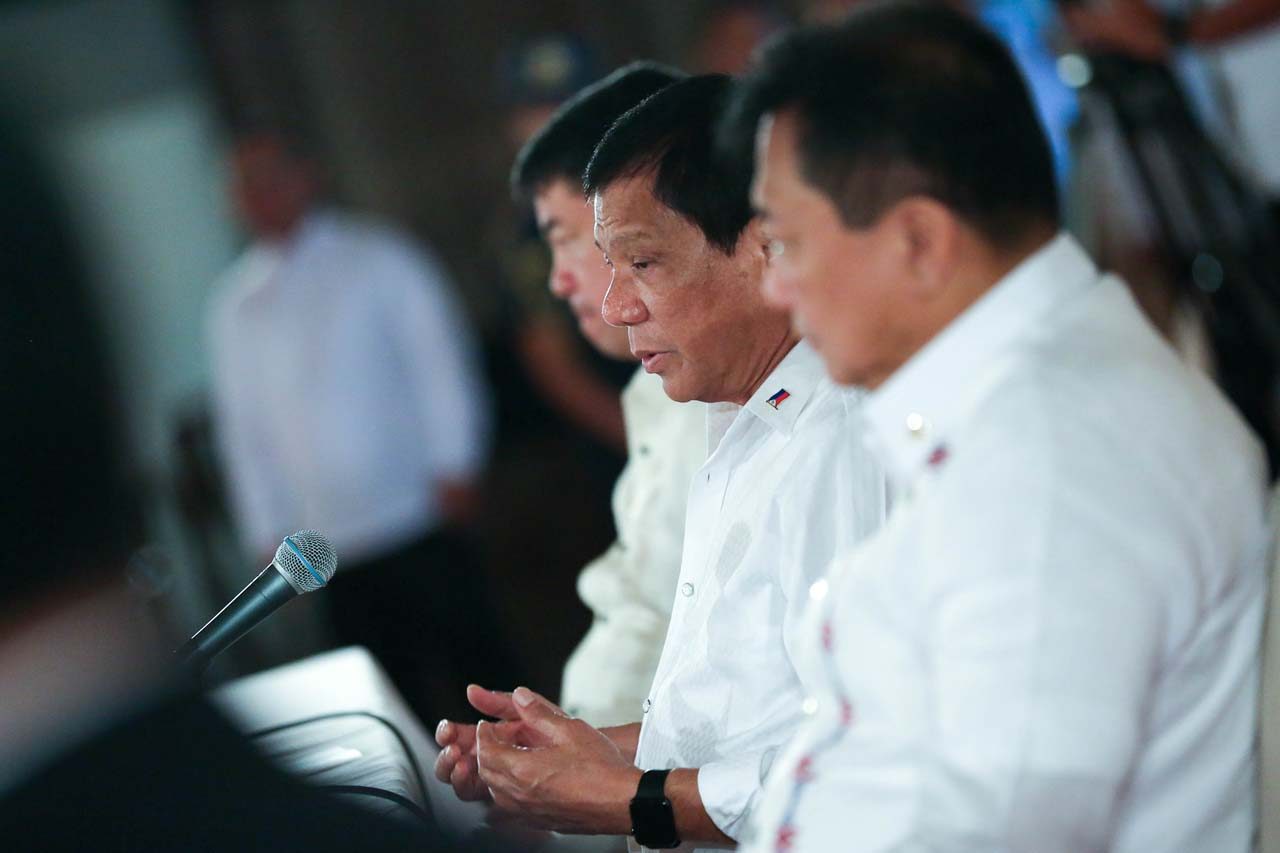 MANILA, Philippines (UPDATED) – As far as Malacañang is concerned, there is no basis for the first impeachment complaint against President Rodrigo Duterte.

“No treason, betrayal of trust, bribery, graft, and corruption, high crime and culpable violation of the Constitution has been committed,” said Presidential Spokesman Ernesto Abella on Thursday, March 16, during a Palace news briefing.

The Palace repeated its previous stand that extrajudicial drug-related killings are not the work of government.

“We reiterate that so called extrajudicial [killings] are not state-sponsored and the President has made sure that he will not turn a blind eye to uniformed personnel who violate and abuse the law,” said Abella.

However, the spokesman said Duterte is ready to take full responsibility for his actions, something the President has himself emphasized in his speeches when discussing the deaths caused by his drug war.

“No one is truly above the law, not even the President. But the administration upholds due process and is ready for the consequences of his actions,and takes into consideration above all the interest of the Filipino people,” said Abella.

But the Presidental Spokesman could not help but make an observation about how the impeachment complaint seems to tie in neatly with other “acts” against the Duterte administration.

“It does seem like part of a larger scheme of things…It just seems rather dramatic that everything seems to be so coordinated at this stage with acts of trying to discredit the admin, and trying to throw it in doubt,” said Abella.

Asked if he suspected it was part of a “destabilization plot” against the government, Abella said, “It certainly seems like an outline.”

‘Scraping the bottom of the barrel’

He was dismissive about the Magdalo Party’s ability to influence other lawmakers or the Armed Forces into supporting any efforts to impeach the President. The party is composed mainly of military personnel and is led by Duterte critic Senator Antonio Trillanes IV.

“At this stage, it seems that they’re [Magdalo Party] scraping the bottom of the barrel,” said Abella.

While Duterte enjoys much support from lawmakers in the House of Representatives, Abella said the President will let his allies act independently on the impeachment complaint.

“The President always allows his allies to act independently of him. He has never manipulated in that sense, the way political intrigues are usually sown,” said Abella.

Despite the impeachment complaint, he said the Duterte administration would continue with its “nation-building” efforts. He described efforts to discredit the government as “noise.”

“There’s so much noise coming from the outside circles and it just shows a sign of a lack of unity and stuff like that, but it would all help us if we just bear the brunt together. I think we should just grow up,” said Abella.

The 1987 Philippine Constitution sets specific grounds for impeachment of the president – treason, bribery, graft and corruption, other high crimes or betrayal of public trust.

The impeachment process is initiated when any congressman or citizen files a verified complaint before the House of Representatives on any of the following grounds: culpable violation of the Constitution, treason, bribery, graft and corruption, other high crimes, or betrayal of public trust.

If at least 1/3 of the House affirms the complaint, it will be forwarded to the Senate for an impeachment trial presided by the Chief Justice. A 2/3 votes of all members of the Senate would convict the President and remove him from office.

Duterte counts at least 267 allies in the House of Representatives. There are 292 total members of the House. – Rappler.com