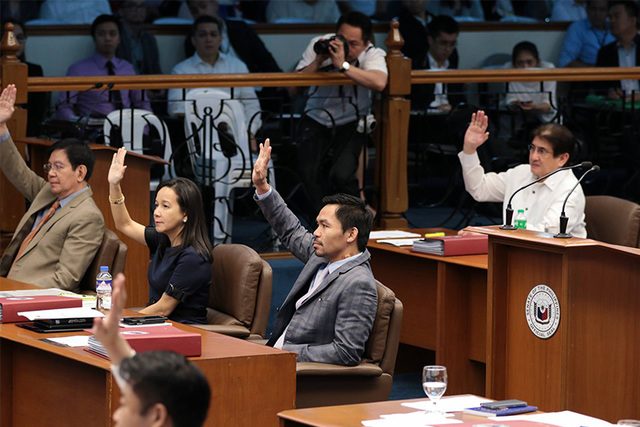 Facebook Twitter Copy URL
Copied
Several senators note that the House is mandated to determine the complaint's validity. But for an administration ally, there is 'no compelling reason' to impeach the President.

MANILA, Philippines – Senators on Thursday, March 16, said the impeachment complaint filed against President Rodrigo Duterte is part of the constitutional process but whether it will progress or not depends on the House of Representatives.

“First, it is the constitutional way of booting out a sitting president, so [the] Magdalo party list should not be criticized, much less mocked, for filing the impeachment complaint. At least this time they are not engaging in another Oakwood type of adventure,” Lacson said in a text message to reporters.

With an expected uphill battle in the House of Representatives filled with Duterte allies, Lacson said: “All I can say is, without necessarily associating myself with them in the matter of impeaching [Duterte], my simple message is, good luck to them.”

The Magdalo group of Senator Antonio Trillanes IV, a critic of Duterte, led the 2003 mutiny against former president Gloria Macapagal-Arroyo, leading to the imprisonment of Trillanes and other members. They were eventually granted amnesty in 2010 under former president Benigno Aquino III.

Magdalo Representative Gary Alejano filed the 1st impeachment complaint against Duterte for his supposed unexplained wealth and for his alleged roles in the spate of extrajudicial killings and in the Davao Death Squad. (READ: Highlights: Impeachment complaint vs Duterte)

Senator Francis Escudero said it is now under the authority of the House of Representatives. They are, after all, mandated by the 1987 Constitution to first determine the strength of impeachment complaints. (READ: FAST FACTS: How does impeachment work?)

“That is the prerogative of every congressman and rests within the sole jurisdiction and discretion of the House of Representatives. Inter-chamber courtesy dictates nothing less,” Escudero said.

The 1987 Constitution states that a verified complaint must be filed at the House, where a majority of votes is needed to either affirm or scrap it.

If the complaint is affirmed, the Senate would then convene as an impeachment court, as it has the sole power to try and decide all cases of impeachment.

Duterte on Tuesday, March 14, hosted an “intimate dinner” for majority senators in Malacañang and sought their support, reportedly telling senators: “Give me time to do my work.”

No compelling reason vs Duterte

Senator Joseph Victor Ejercito, a known Duterte ally, criticized the complaint, saying there is “no compelling reason” to impeach the President.

Ejercito, whose father, former president Joseph Estrada, was a subject of a similar complaint, also said Duterte’s time is different from that of Arroyo, whose legitimacy was questioned over electoral fraud in the 2004 polls.

“Iba ang sitwasyon noong nanguna ang Magdalo sa ouster plot laban kay GMA sa sitwasyon ngayon (The situation when Magdalo led the ouster plot against GMA is different from the situation now). GMA’s legitimacy was in question then, while President Duterte was given the mandate by the Filipino people. No compelling reason to file an impeachment complaint against the President at this time,” Ejercito said.

Minority senators Risa Hontiveros and Francis Pangilinan said they would respect the outcome of the impeachment complaint in the House.

“Impeachment is part of our democratic process of exacting accountability. I have not yet read the petition. In the meantime, as a senator who is constitutionally-obliged to sit as judge in the event that this process prospers, I will leave it to our colleagues in the House of Representatives to determine the merit of the petition,” Hontiveros said. – Rappler.com