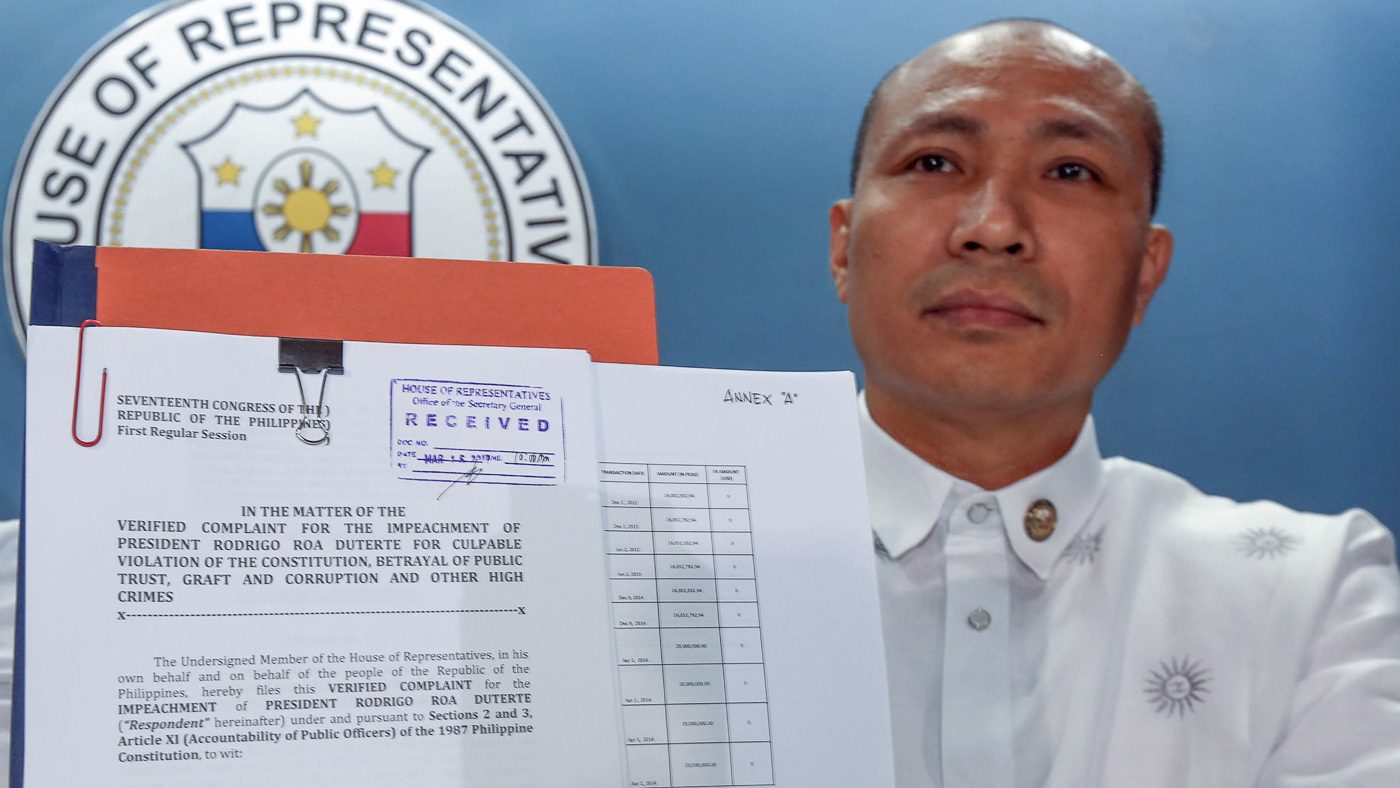 MANILA, Philippines – It was only last week when Senator Antonio Trillanes IV warned about an impeachment complaint against President Rodrigo Duterte. But it was one soundbyte too many from a politician who has dedicated the last year fighting the President.

Thus many were still surprised on Thursday, March 16, when his close ally, fellow mutineer-turned-lawmaker Magdalo Representative Gary Alejano took the center stage as the sole complainant in the first impeachment complaint against Duterte.

Alejano was also joined by former Magdalo Representative Ashley Acedillo as he detailed the allegations against the President. Acedillo was there to support Alejano even as he is not a complainant himself.

The brash, once-young mutineers of Oakwood in 2003 and Manila Peninsula in 2007 are back in action together – at least the faction that sees Duterte as the new enemy.

There’s another faction that backs the President. Trillanes and his group had a falling out with former Marine Captain Nicanor Faeldon while they were in detention. A staunch Duterte supporter, Faeldon now serves as Bureau of Customs commissioner. A 44-year-old father of 5, including twins, Alejano graduated from the Philippine Military Academy in 1995, when retired general Fidel Ramos was president.

He’s not only a battle-scarred warrior. He also moved against the leader he was once tasked to secure: former president Gloria Macapagal-Arroyo.

A recipient of the Distinguished Conduct Star, the 2nd highest combat honor, the former Marine captain had served in its force reconnaissance unit, battling terrorists and rebels in the treacherous battlefields of southern Mindanao.

In 2003, Alejano was a member of the Presidential Security Group, tasked to protect then president Arroyo.

But he led a group of about 300 soldiers who staged a mutiny against her government by holding out in Oakwood Hotel in Makati in August 2003.

Alejano would have been able to hurt Arroyo if that was the plan, because he knew her routes and itinerary, according to a Magdalo soldier. But they only meant to protest.

Today, he and Arroyo both belong to the House of Representatives.

The Oakwood mutiny failed and the Magdalo soldiers were brought to jail to face court martial and rebellion charges.

The botched putsch prompted the creation of a fact-finding commission that investigated corruption in the military.

The Magdalo soldiers would become an important symbol of opposition to Arroyo, welcomed by the political opposition that recognized the need for military support to oust her in the aftermath of the “Hello, Garci” scandal in 2005.

Its spokesman Trillanes shot to fame. While in jail, Trillanes and the Magdalo group would defy all odds to make him win a senatorial seat in the 2007 senatorial race. (READ: What a coup!)

Later that year, in September 2007, Alejano again marched with Trillanes out of a Makati court that was hearing rebellion charges against them, to call for Arroyo’s ouster.

The mutiny failed again and Arroyo, despite her unpopularity by then, kept her hold of the military up to her last day in office.

In 2008, the armed forces dismissed Alejano and his fellow officers after a court martial found them guilty of violating the Articles of War.

From battlefield to politics

Arroyo’s successor, then president Benigno Aquino III, granted the Oakwood mutineers amnesty soon after he won the presidency in 2010.

That same year, Magdalo (Magdalo para sa Pilipino) tried to run for the party list, but its bid was rejected by the Commission on Elections, which said it would not condone the acts of a group that aspired to overthrow governments.

Alejano would try his luck in a local seat also in 2010, as mayor of Sipalay in Negros Occidental, but lost.

Formally renouncing violence, Magdalo again tried to run for a party list seat in 2013. It got accredited and won 2 seats, which went to Alejano and Acedillo.

The Magdalo group aligned with the Aquino administration. While Trillanes would continue to pick battles with other politicians, sometimes hurting his reputation because of controversial issues, his peers in the lower House were generally low-key and predictable.

Alejano rarely made headlines, compared with Acedillo who constantly commented on issues relating to the West Philippine Sea. When Alejano did speak out, it was mostly about issues involving the military or the peace process.

Magdalo wasn’t as lucky in the 2016 elections that Duterte won, winning only one seat in the House. Alejano, the No. 1 nominee, is the party’s current lone representative.

It’s his turn to take the floor.

The former soldier loudly opposed the burial of former Philippine dictator Ferdinand Marcos at to the Libingan ng Mga Bayani, dismissed the credibility of inmates testifying against Senator Leila De Lima, and cast doubts on the sincerity of the communist rebels talking peace with the government.

“Kahit noong kami ay sundalo pa, may takot din kami. Pero nanaig ang aming desire na magsilbi sa bayan (Even when we were soldiers, we were also afraid. But our desire to serve the country always prevailed),” Alejano said in explaining his move to impeach the country’s most powerful ma

He acknowledged that the impeachment process was going to be an “uphill battle.” So what’s the point in filing the complaint?

At a time when many are afraid, Alejano said Magdalo wants to inspire the other critics of Duterte from the Church, schools and civil society to step forward and oppose his regime.

(Magdalo has a long history of taking a stand to support reforms and initiatives that will benefit the country and the people. In filing this complaint, we aim to be a vehicle for fellow Filipinos to have a voice in opposing the abuses and crimes of President Duterte. Our role is to lead the way for the others who may want to be a part of the crusade.)

Whether the rest will follow remains to be the challenge for Magdalo – then and now. – Rappler.com