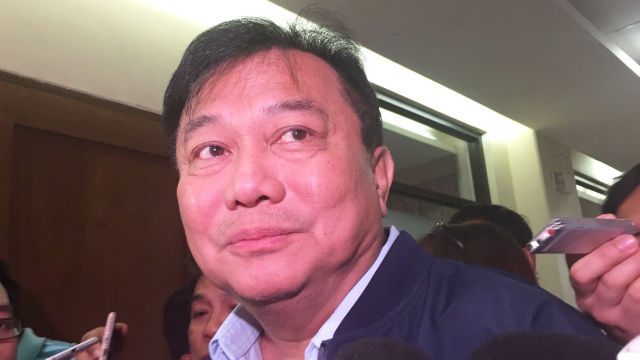 Facebook Twitter Copy URL
Copied
(UPDATED) Speaker Pantaleon Alvarez doubts the substance of the first impeachment complaint filed against the President, saying it will likely be rejected by the House

“We are all entitled to our own stupidity. Hehehe,” said Alvarez in a text message to Rappler.

The impeachment complaint cited the President’s alleged involvement in the creation of the Davao Death Squad when he was mayor; his war on drugs since he became president, which has led to the alleged summary killing of thousands of Filipinos; and his supposed unexplained wealth in the form of bank deposits and undeclared properties, among others. (READ: Highlights: Impeachment complaint vs Duterte)

The 1987 Constitution sets specific grounds for impeachment of the president – treason, bribery, graft and corruption, other high crimes or betrayal of public trust.

All impeachment complaints must also emanate from the House, where at least 267 lawmakers are allied with Duterte. (READ: FAST FACTS: How does impeachment work?)

Alvarez, however, doubts the substance of the complaint.

(Let’s not even talk about numbers. Let’s talk about the substance. I don’t think it will be passed based on its substance.)

(For an impeachment complaint to prosper, it needs to be sufficient in form and substance before it goes to the plenary. What I’m saying is that the form may comply, but the substance they enumerated for the grounds for impeachment is weak.)

At least 1/3 of all members of the House is needed to “either to affirm a favorable resolution with the Articles of Impeachment of the Committee, or override its contrary resolution.”

In a Rappler Talk interview, Alejano said he hopes Alvarez would show respect to his colleagues in Congress.

“He is the Speaker and he should exemplify the professionalism and the maturity as a leader, as one of the leaders of the country. I’m saddened by that comment because what I did is based on a constitutional provision. That is legal. That is not illegal,” said Alejano.

“To say that I am stupid, that is an unfortunate remark from a Speaker. But again, I hope he will afford the same respect not only to me but also to my constituents and to the other people and the members of this House. Because I myself, I respect his position as a Speaker of this House,” he added.

In another press conference with reporters, Alejano conceded that the odds are against him.

(If you look at the numbers in the death penalty vote and how the House leadership maneuvered for its approval, then [impeachment] is an uphill battle.)

He said several lawmakers have signified support for him, but refused to disclose their names or how many they are for now. – Rappler.com