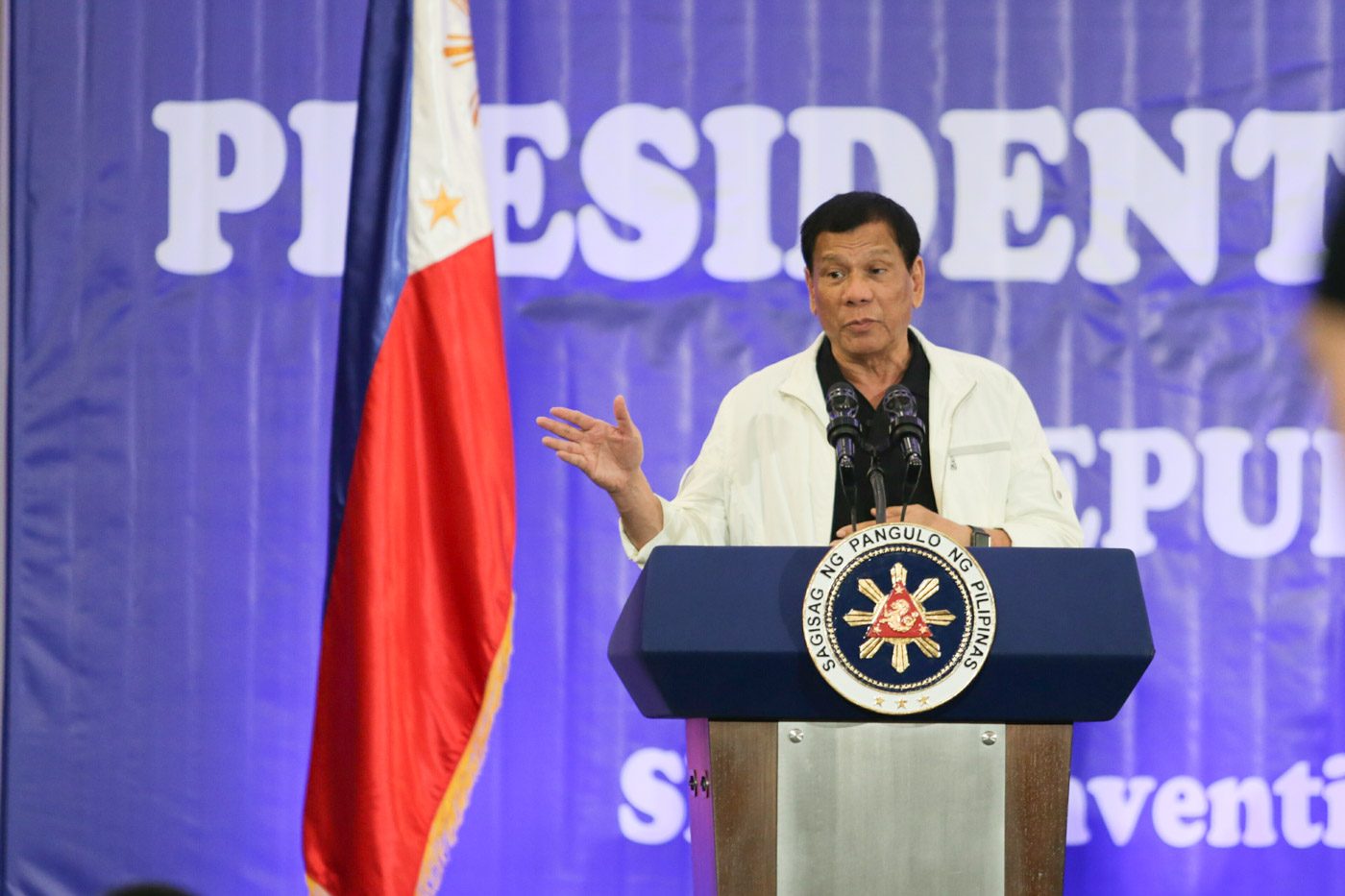 Facebook Twitter Copy URL
Copied
While his allies and the Palace defend President Rodrigo Duterte from an impeachment case and a possible ICC case, he himself 'welcomes' these

MANILA, Philippines – His allies and the Palace may have been quick to defend President Rodrigo Duterte from an impeachment complaint and the possibility of a case before the International Criminal Court (ICC), but he does not seem to care less.

“I welcome both developments,” said Duterte on Sunday, March 19, in a press conference at the Davao International Airport before he left for official visits to Myanmar and Thailand.

A week earlier, the lawyer of self-confessed former Davao Death Squad member Edgar Matobato said he would be filing a case against Duterte before the ICC in The Hague, Netherlands.

Lawyer Jude Sabio said he would file a case of case of crimes against humanity over extrajudicial killings attributed to the President and his popular but bloody war on drugs. (READ: Planned ICC case ‘not applicable’ to Duterte, PH – Palace)

“They can do their worst. I can do better in my performance as a worker in government, period. This is a democracy,” added the President.

A war on drugs was one of Duterte’s key election promises.

As soon as he was sworn into power, law enforcers led by the Philippine National Police (PNP) have launched a relentless crackdown on illegal drugs, and both its pushers and users.

Since July 1, 2016, police have recorded more than 7,000 deaths linked to the drug war. These include more than 2,500 drug suspects killed in police operations. The cops have classified the rest as “deaths under investigation” or vigilante-style killings with possible links to illegal drugs.

Government officials and allies of the Duterte administration have repeatedly rejected allegations that the killings are state-sponsored.

The President was also unclear about whether or not he thinks Vice President Leni Robredo, who belongs to the once-ruling Liberal Party (LP), had a role in the impeachment complaint filed against him.

Alvarez is also considering filing an impeachment case against the Vice President.

“I will not be surprised if she is there, but I will not speculate if she is there,” said Duterte, who appointed Robredo to his Cabinet only to instruct her months later to stop attending Cabinet meetings. Robredo subsequently stepped down as housing chief.

The LP was the country’s dominant party for the 6 years of the Aquino administration. Robredo is now the party chairperson as its highest-elected member.

Duterte, however, distanced himself from impeachment talks against Robredo, saying he does not want to “tinker” and instead would rather focus on fulfilling his promises as president.

For an impeachment complaint to progress, it must be approved by at least one-third of the House of Representatives, which is dominated by Duterte allies. It will then be transmitted to the Senate.

At least two-thirds of the Senate will then have to convict the President to remove him from office. The Senate majority bloc is led by Senate President Aquilino Pimentel III, PDP-Laban president. (READ: FAST FACTS: How does impeachment work?) – Rappler.com