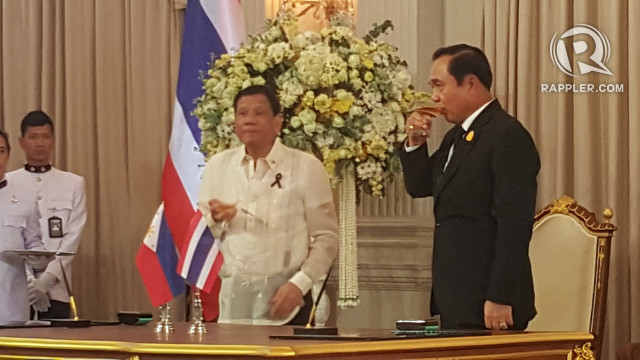 BANGKOK, Thailand – After saying he can’t stop China from building structures in the South China Sea, President Rodrigo Duterte said the Philippines is determined to complete the framework of guidelines that will govern China and the Southeast Asian region’s approach to the disputed body of water.

“Our side emphasizes the need for the full and effective implementation of the Declaration of Conduct of countries in the South China Sea and express the determination to complete the framework of the Code of Conduct in 2017,” said Duterte on Tuesday, March 21, in Bangkok.

Duterte was at the tail-end of his official statement delivered beside Thai Prime Minister Prayut Chan-o-cha at the Government House. They both gave statements right after their bilateral meeting and signing of agreements.

The Philippine President emphasized the importance of peace in the South China Sea, a critical body of water where around 80% of global trade passes through. The same sea is in the midst of a tug-of-war between several Southeast Asian countries, including the Philippines, and China.

“We both also stress the need to maintain the peace and stability in the region, including the South China Sea. We recognize too that respect for freedom of navigation and overflight is in the interest of all countries within and outside the region,” said Duterte.

Thailand’s leader also expressed his support for the South China Sea dispute to be resolved through international law.

Duterte’s statements about the South China Sea come only two days after he said he could do nothing to stop China from building a monitoring station on Scarborough Shoal (Panatag Shoal), a sandbar within a portion of the South China Sea which is within the exclusive economic zone of the Philippines.

China’s island-building activities in these parts of the disputed sea have escalated tensions in the area. (READ: SC’s Carpio warns vs China station on Scarborough)

The Philippine President, eager for warmer ties with China, has delayed any mention of the international arbitral award that nullified the 9-dash line being used by China to claim almost all of the South China Sea.

As Duterte takes on the chairmanship of the Association of Southeast Asian Nations, he faces the challenge of balancing concerns of ASEAN member states, several of whom are claimants of parts of the South China Sea, and his wish to be on China’s good side. – Rappler.com