Why Duterte reminds Thais of Thaksin and his drug war 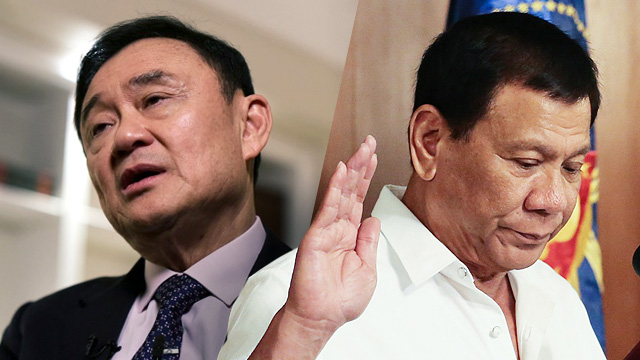 BANGKOK, Thailand – When some Thai people think of President Rodrigo Duterte, they are reminded of their ousted prime minister Thaksin Shinawatra who also waged a deadly war on drugs over a decade ago.

“Lots of Thai people, some of them I mean, they know of President Duterte from the previous election and from the drug war, especially because the drug war you’re having in the Philippines is similar to what we had about 14 years ago,” Thai reporter Winittha Jitkree told Rappler on Wednesday, March 22.

Duterte, who is on his last day in Thailand for his official visit, discussed with Thai Prime Minister Prayut Chan-o-cha the importance of cooperation in fighting crimes like the illegal drug trade.

Thailand, like the Philippines, continues to wrestle with the spread of drugs and has waged a violent but short-lived drug war very similar to Duterte’s.

If the Philippines has shabu as its most consumed drug, Thailand has yaa baa, a mix of methamphetamine and caffeine that can either be smoked, injected, or ingested.

Like in the Philippines now, their drug war was led by a popular and populist leader: former Prime Minister Thaksin Shinawatra. He began his campaign against illegal drugs in 2003. A businessman before entering politics, Thaksin was a refreshing antidote to typical Thai politicians and exemplified iron-fisted leadership.

Not too long ago, Thailand was besieged by the type of criticism from human rights groups that now dominate headlines in the Philippines.

1. Deaths. “We also had killings and forced disappearance so it’s similar,” said Jitkree. In Thaksin’s drug war, some 2,800 drug-related deaths took place, with government claiming enforcers were forced to use deadly force because suspects fought back.

“They were disappearing, kidnapped, until now you can’t say where they [are],” said Jitkree.

Only 9 months into office, Duterte’s drug war has racked up over 2,500 deaths in anti-drug police operations. This figure does not include the 3,600 “deaths under investigation,” or mysterious deaths that occurred outside government operations.

2. Lists, threats. Like in the Philippines, “strict measures” were implemented against drugs in Thaksin’s Thailand, with the police force “given tasks” to weed out suspected drug personalities, said Jitkree.

Thaksin also released lists of suspected drug personalities and gave ringing ultimatums to government officials to ensure their capture and, if they fight back, death.

Duterte has released a similar list of around 150 names and is in possession of a much thicker list, with thousands of names. His speeches are peppered with threats against drug suspects and assurances to law enforcers that he will protect them from lawsuits.

3. Deadly mistakes. The wrong people were killed in Thailand’s drug war. A government investigation conducted in 2007, after Thaksin’s administration, concluded that of the 2,800 killed in the name of the drug war, more than half, or 1,400, were found to have had no dealings with drugs.

In the Philippines, the police claims to be investigating deaths related to the drug war but have not been transparent about their findings. So far, 922 deaths have been investigated. Groups called for investigations after reports of police or vigilantes killing even drug personalities who have surrendered or murdering those with no history of drug dealing or abuse.

It took the death of a South Korean businessman at the hands of police to convince Duterte that corrupt police may be abusing his drug war. He took the police force out of the campaign and ordered a purge of errant policemen. But a few months after, he allowed them back into the war.

Fast forward to 2017: the Philippines is experiencing the same type of criticism from international groups. As with Thailand, UN Special Rapporteur on Extrajudicial Killings Agnes Callamard has asked the Philippine government to stop arbitrary killings.

Human rights groups, however, are now more focused on studying the possible human rights violations of the current military junta, the repression of freedom of speech and media, and the regulations against political protest.

While Duterte and Prime Minister Prayut discussed the fight against illegal drugs, it’s not clear if Thaksin’s controversial drug war was brought up. Duterte brought along Philippine Drug Enforcement Agency Director-General Isidro Lapeña, whose agency leads the drug war, indicating he is serious about cooperation on this front with Thailand.

What lessons is Duterte willing to learn from the Thailand experience? – Rappler.com