Mar 23, 2017 12:08 PM PHT
Rappler.com
Facebook Twitter Copy URL
Copied
President Rodrigo Duterte says under his proposal, the Catholic Church, other religious denominations, and various groups can submit nominees for him to choose from 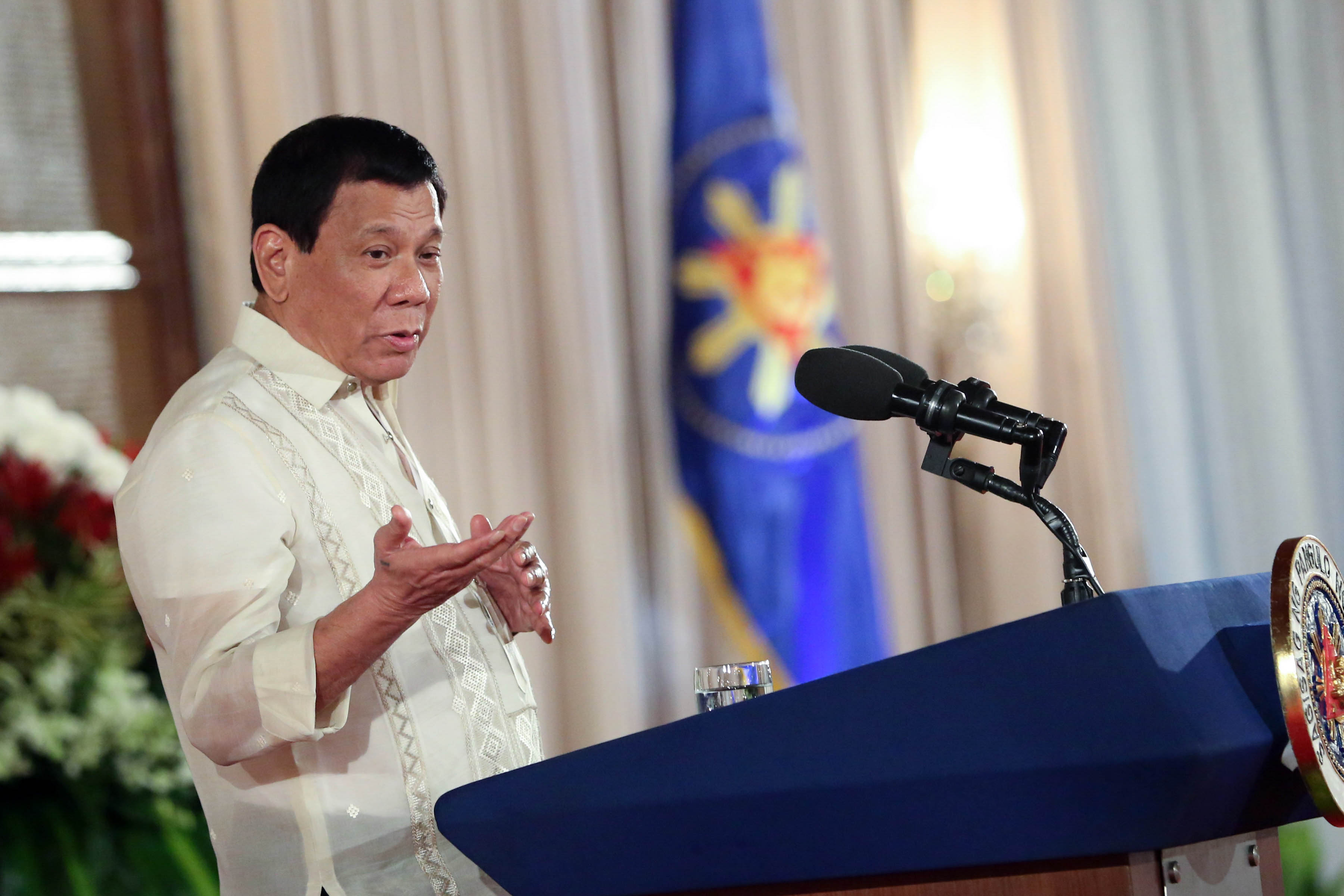 MANILA, Philippines – President Rodrigo Duterte said on Thursday, March 23, that he is ready to “compromise” with Church leaders and other groups on the selection of barangay officers-in-charge (OICs), should Congress heed his proposal to reset this year’s polls and declare all village positions vacant.

Duterte said this in a news conference upon his arrival from an official trip to Thailand early Thursday, when asked to confirm the statement of Interior Secretary Ismael Sueno on the Chief Executive’s proposal to Congress leaders. (READ: Duterte wants to appoint barangay OICs if polls reset)

The President admitted that pursuing his proposal would be “quite messy” as the  incumbent barangay officials would strongly oppose it. He said this was why the administration is drafting guidelines on the proposed selection of village OICs.

“We are looking for a way to just appoint the barangay captains but the mechanism of how to go about it, select them…it’s always the President who has the power to appoint. But I’m going to a compromise with the Church and everybody.  They can nominate 3 citizens,” he said.

Duterte bared his basic requirements for a barangay OIC nominee: “Pagka ang PDEA pati ang pulis (If the Philippine Drug Enforcement Agency and the police) and the military say that they have no connections with the rebels, that’s one. Second is that they are not into drugs, and third is that they are not really the leaders of politicians. If you can have that at least.”

The criterion of not being a “leader of politicians,” has yet to be clarified with Palace officials as of posting. On Wednesday, however, Sueno told reporters in Bacolod City that those affiliated with the opposition would not be appointed as barangay OICs if the proposal gets Congress’ nod.

Duterte said he would accept nominations from the Catholic Church, from Islam leaders, religious denominations, and other organizations.

“It’s not actually interference in the preference of the character on who should be there. Election eh (It’s an election). Hindi naman sabihin nakikialam ‘yung simbahan (This would not be construed as interference of the Church). And the Lions or lahat, lista mo lang ‘yung (everybody else, list down those who are) accredited; they can nominate.  So we can do away with shady characters,” he said.

In explaining why he wants to postpone the October elections and to be allowed to appoint barangay captains, Duterte cited his administration’s vaunted war on drugs. He said the same thing last year, when he supported the postponement of the polls. (READ: Duterte: Drug money might influence barangay, SK polls)

“The reason why I advised Congress [leaders]…sabi ko sa kanila (I told them), ‘Do not commit the mistake of calling for an elections now. Because narco-politics has entered into the mainstream of Philippine politics,’” he said.

On his bid to declare all barangay positions vacant and to appoint village chiefs if the barangay elections are postponed this year, Duterte claimed that “there is no legal basis” for incumbent officials to keep their posts in a hold over capacity anyway.

“You know, that’s a problem. There is no legal basis for being there. Walang hold over sa (There is no hold over in the) barangay. They are just there, I don’t know de facto, whatever,” Duterte said.

Laws postponing the barangay elections, including the latest one, all provide for the hold over of incumbent officials. (READ: Duterte signs law postponing barangay, SK elections)

Section 3 of  Republic Act No. 10923 postponing the  barangay and Sangguniang Kabataan elections from October 31, 2016, to the fourth Monday of October 2017, or October 23, 2017 states: “Until their successors shall have been duly elected and qualified, all incumbent barangay officials shall remain in office, unless sooner removed or suspended for cause.”

In the early morning news conference, Duterte warned the only other remedy against barangay officials with drug links is to “kill them all.”

“Either patayin muna natin ‘tong mga yawa na ito kasi ‘pag ka hindi (we kill all these fools because if not), they will be elected again and you have the looming elections next sa 20(19),” he said.

“The local elections, it’s just around the corner. Kung nandiyan ito (If they are there), and they can influence the electorate, magkakaroon ng utang loob itong mga officials (these officials will have a debt of gratitude). Delikado (This is dangerous) because then you’ll have completed the [evolution] of this country into a narco-politics state,” Duterte added.

He said if the barangay elections push through in October, those who are in the government’s “drug list would win.”

“Forty percent of the total barangay captains are into drugs, that’s my problem,” Duterte said.

In September 2016, or 3 months into his presidency, Duterte bared a draft list of 1,000 government officials, including governors, mayors, judges, policemen, and barangay captains with alleged drug links. He showed a “final” list in January of this year and urged local officials who are in it to “resign or die.” – Rappler.com