Mar 24, 2017 7:10 PM PHT
Miriam Grace A. Go
Facebook Twitter Copy URL
Copied
The Department of the Interior and Local Government will use the mandatory barangay assemblies – which fall on March 25 and October 8 this year – to gather support for the government's federalism agenda 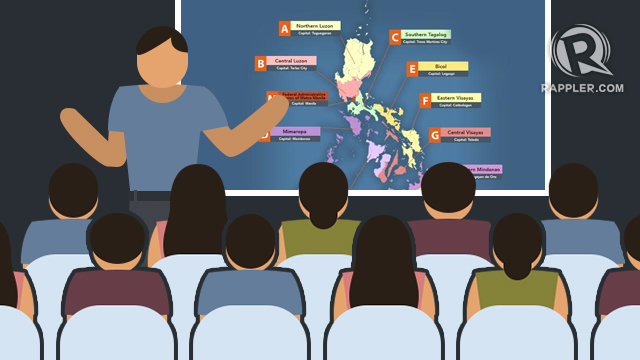 MANILA, Philippines – On Saturday, March 25, when 42,000-plus villages conduct the mandatory barangay assemblies, the Department of the Interior and Local Government (DILG) wants local officials to use these forums to gather support for the Duterte administration’s proposal to shift to federalism.

Particularly, DILG Secretary Ismael Sueno said in a statement on Friday, barangay officials should “advocate PHederalism” in these discussions.

A play on the words “Philippines” and “federalism,” it  refers to the Philippines’ own model of the system of government, which takes into account lessons from other countries and our “cultural particularities and sensibilities.”

Emily Padilla, the undersecretary for special concerns on top of the DILG’s federalism campaign, issued a memorandum to the agency’s regional directors. She told them to “encourage all punong barangays within their area of jurisdiction” to even “pass a resolution expressing their support to the proposed shift.” (READ: Congress 2017: Bleak prospects for shift to federalism)

The holding of barangay assemblies are mandated by the Local Government Code. It gives residents the opportunity to push for the enactment or amendment of local ordinances “for the welfare of the barangay and the city or municipality.”

In these assemblies – held in the last Saturday of March and in the second Sunday of October every year – residents as young as 15 years get to know and approve of the officials’ reports on what they accomplished and how they spent the funds during the preceding half of the year.

During the first barangay assemblies under President Rodrigo Duterte, in October 2016, Sueno ordered local officials to include in their discussions with constituents the “illegal drugs problem, peace and order situation, disaster preparedness, and solid waste management.”

But in this second round of assemblies, the DILG wants the gatherings to be an extension of the administration’s federalism campaign. (READ: Federalism not the only way to empower local governments – experts)

The DILG kicked off in August 2016 its information drive and public consultations on the proposal to change the country’s system of government – a campaign promise of Duterte.

In parallel efforts, the PDP-Laban Federalism Institute, a think tank of the President’s party, has been conducting public consultations as well. It is preparing a draft federal Constitution to be submitted to Congress for consideration.

Padilla’s memo said talking points and promotional videos would be emailed to the regional directors, so these could guide the discussions at the barangay level. They are required to submit “statistical and narrative reports” – written, photos, and videos, and Facebook Live links – on how the assemblies went.

“All barangays…are encouraged to live stream their barangay assemblies through Facebook Live,” the undersecretary said. – Rappler.com