Facebook Twitter Copy URL
Copied
'If the women of the world today enjoy what is known as the bill of human rights for women, the whole world owes it to Leticia Ramos-Shahani,' Ambassador Rosario Manalo says

MANILA, Philippines – Decades ago, diplomat Leticia Ramos-Shahani received a “kilometric message” from her boss, then Philippine foreign secretary Carlos P. Romulo, reprimanding her for a risk she took.

Without consulting Romulo because she was pressed for time, Shahani brought to the United Nations (UN) a working draft of the Convention on the Elimination of All Forms of Discrimination against Women (CEDAW). This was in 1973.

Adopted by the UN General Assembly in 1979, CEDAW would later become the international bill of rights for women.

Shahani – who died on March 20 after a bout with colon cancer – recounted her role in CEDAW through an interview with Anna Marie C. Santos and Irish Kay L. Kalaw for the book Frontlines of Diplomacy edited by Ambassador J. Eduardo Malaya.

Shahani explained that initially, said no government wanted to prepare a working draft for CEDAW “because it would really commit one’s government into policies on education, labor, reproductive health, etc.”

Shahani realized, however, that “with no draft to work on, we would just be talking among ourselves and waste time.” Shahani then instructed her assistant, Mina Falcon, to prepare a draft of the CEDAW even without consulting Romulo about it.

The situation got more complicated when no one wanted to co-sponsor Shahani’s draft except Russian delegate Tatiana Nikolaeva, “and this was during the height of the Cold War.”

Shahani recounted in Frontlines of Diplomacy, “We Filipino diplomats were under strict instructions not to speak to the Russians – they were communists, ‘they are our enemies,’ we were told.”

She went ahead and sought Nikolaeva’s support. Nikolaeva supported Shahani’s draft, which “ceased to be Philippine-Russian draft and became a Working Group draft.” 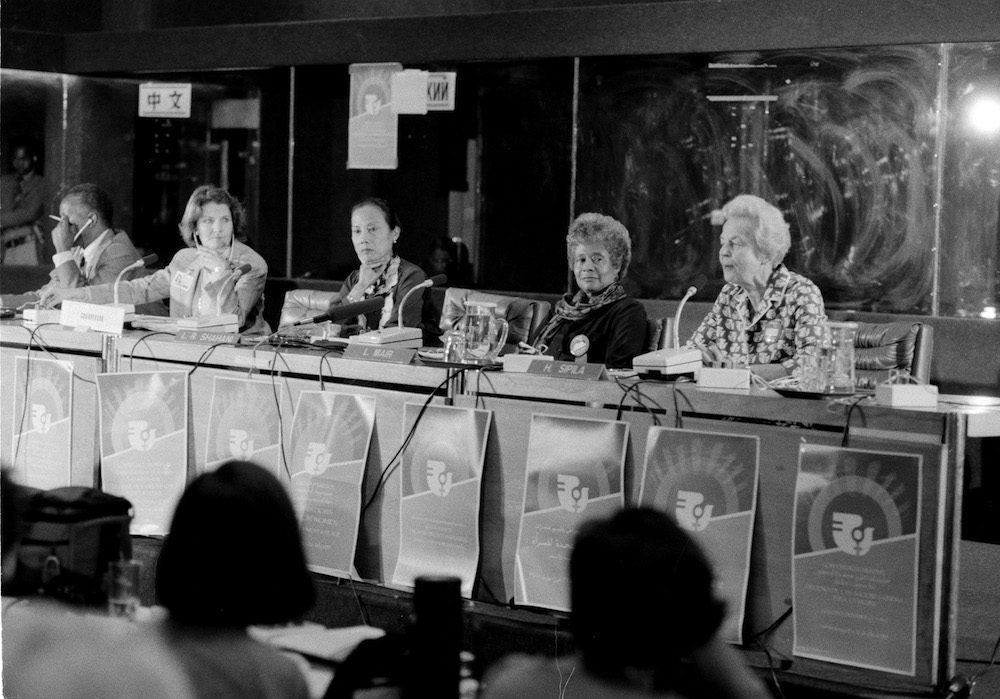 Later, someone at the Philippine Mission to the UN in New York reported this – “may nagsumbong” (somebody squealed), Shahani said – to the Philippine Department of Foreign Affairs (DFA).

This was when Romulo wrote Shahani.

Shahani recounted: “I received a kilometric message from Carlos P. Romulo, the secretary of foreign affairs, reprimanding me for the action I took. ‘How dare you submit a full-blown convention without consultations with the ministries concerned? You have no right to put your government at risk. You should know better than that.'”

“I replied, ‘Sir, this is a working draft. It’s really a non-paper,'” she said. Then Shahani explained her dilemma to Romulo, and told her boss he can fire her any time.

“I never heard from him again on the matter. Perhaps he and those around him realized that my fault was minor in relation to the gains obtained by our country and the world. Perhaps what they considered a faux pas at that time was something they later realized was a tempest in a teapot,” she said.

Shahani continued: “Well, what did that episode demonstrate? It shows what leadership is. A leader senses that a situation needs something and he or she must know how to create what is needed.”

‘Very soft spot for the poor’

Days after her death, Shahani’s friends remembered her role in the CEDAW and in Philippine diplomacy in general.

They spoke during the necrological service for her at the DFA on Friday, March 24, after a similar tribute at the Philippine Senate for this former senator.

One of those who delivered a eulogy was Ambassador Rosario Manalo, current rapporteur and former chair of the 23-member committee of experts of the UN CEDAW. Manalo is also the mother of the current Philippine foreign secretary, Enrique Manalo.

In her speech, Ambassador Manalo pointed out, “If the women of the world today enjoy what is known as the bill of human rights for women, the whole world owes it to Leticia Ramos Shahani.”

“She had a very soft spot for the poor, the urban poor, and the peasants, the poor farmers,” the ambassador added.

Ola Almgren, resident coordinator of the UN in the Philippines, also praised Shahani.

“Senator Shahani was widely recognized as one of the women who helped shape the global agenda on women’s rights, providing leadership at the United Nations, and at the same time raising of course the profile of the Philippines on the global stage,” Almgren said.

For Ambassador Rosalinda Tirona, her former boss is best remembered for her courage. Tirona said she worked under Shahani when the late diplomat was ambassador to Australia.

(I became courageous because my boss was more courageous. It would be a shame if I were a coward. And there, I learned that it is better for me to die a hero than to die a coward.)

Tirona also said, “I’ve learned so much from her that I can say at this point, that my world diplomacy and my world of humanity is the world of Leticia Ramos-Shahani.”

Shahani’s daughter, Lila, pointed out that her mom “became a public figure at a time when women were expected to stay at home.” (READ: A eulogy for Mom)

Ramos recounted at the DFA on Friday: “Our friendly, loving controversies started when she was 3 years old and I was a year and a half older, and she wanted to play with the boys, and she wanted to climb the mango tree like I have done. Of course we quarrelled.”

“And there were other many instances,” Ramos said, “when she broke into the boys’ games.”

The late Leticia Ramos-Shahani was not only a diplomat and senator. She was also a women’s warrior. – Rappler.com