Mar 27, 2017 12:55 PM PHT
Mara Cepeda
Facebook Twitter Copy URL
Copied
HB 5233 also seeks to remove the Office of the Solicitor General as an attached agency of the Department of Justice and instead put it under the Office of the President 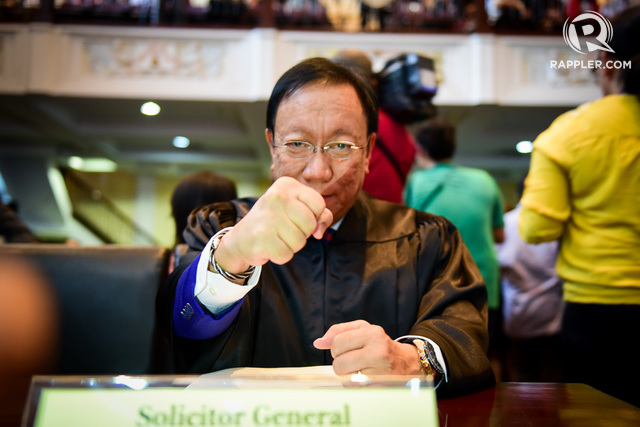 MANILA, Philippines – Top ranking members of the House of Representatives filed a bill seeking to expand the powers of the Office of the Solicitor General (OSG), mandating it to go after ill-gotten wealth and oversee government owned and controlled corporations (GOCCs).

Under the measure, the Office of the Government Corporate Counsel (OGCC) and the Presidential Commission on Good Government (PCGG) will be transferred under the office of Solicitor General Jose Calida.

The PCGG, meanwhile, is tasked to recover ill-gotten wealth amassed by the late dictator Ferdinand Marcos, his family, and cronies. (READ: Recovering Marcos’ ill-gotten wealth: After 30 years, what?)

Over the last 30 years, the PCGG has recovered at least P170 billion despite working on an overall budget of P2.9 billion over the same period.

To make the OSG’s expansion of powers possible, HB 5233 will remove the OSG as an attached agency of the Department of Justice and instead put it under the Office of the President to make it “a truly independent and autonomous office.”

“In order to achieve economy, eliminate overlapping of functions, address the expanding needs of GOCCs for legal representation, and enhance government efforts to recover ill-gotten wealth and investigate and prosecute cases relative thereto, the legal services mentioned above must be consolidated into one office,” said Alvarez, Fariñas, and Umali in their explanatory note.

The House leaders added that consolidating the legal services under the OSG will “specifically promote the wiser and more prudent use of public funds” because it will remove the OGCC’s practice of billing client GOCCs for legal services.

Alvarez previously said last February 14 that he would file a bill moving the OGCC and the PCGG under the OSG as he is dissatisfied with the performance of the two agencies so far.

HB 5233 would also upgrade the qualifications for appointment, rank, category, prerogatives, compensation, benefits, and privileges of the Solicitor General equal to that of an Associate Justice at the Supreme Court.

“While this provision does not change the Solicitor General’s present salary grade of 31, it serves to enhance the prestige and honor of the position,” said Alvarez, Fariñas, and Umali.

HB 5233 also aims to grant the OSG with the new power to engage the service of outside lawyers “to assist in the discharge of its duties and responsibilities in cases requiring highly specialized legal skills, knowledge or expertise, including but not limited to foreign arbitrations and litigations.”

This new power would be subject to the President’s approval, but such an engagement would also be exempted from the provisions specified under Republic Act Number 9184 or the Government Procurement Reform Act.

HB 5233 also allows the OSG to increase the number of its legal divisions from at least 30 to at least 50, with every division composed of at least 10 lawyers. – Rappler.com