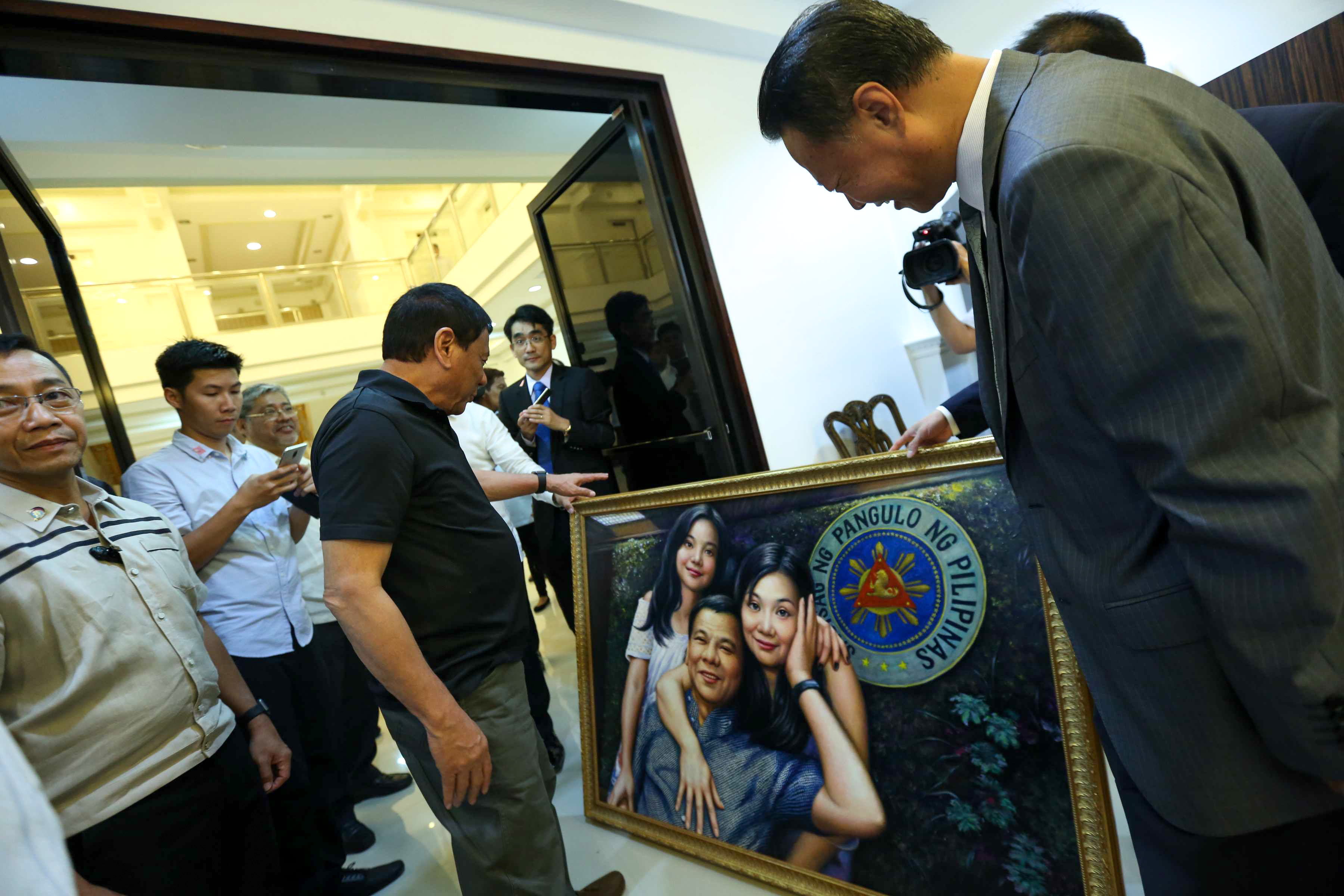 MANILA, Philippines – The day before President Rodrigo Duterte’s 72nd birthday, envoys of both the United States and China, two of the country’s most powerful allies, sought a meeting with him.

Chinese Ambassador Zhao Jianhua came prepared with a birthday gift: a large painting of Duterte with his common-law wife Honeylet Avanceña and their daughter Veronica.

US Ambassador Sung Kim was the first to meet with the Philippine President that day, Monday, March 27.

During their meeting, scheduled at 3 pm, he and Duterte talked mostly about security concerns, according to Malacañang.

Kim assured Duterte that the US “understands the security concerns of the Philippines and that the US is ready to provide more military equipment, assistance, and training,” said Presidential Spokesman Ernesto Abella in a statement.

The US envoy also highlighted the cooperation between Philippine and American intelligence agencies.

According to the Palace, Duterte gave assurances that ties between their two countries “remain strong” and that there is a “readiness to discuss matters of mutual interest with the US.”

Days before their meeting, Duterte had again ranted about how the US “did nothing” when China began reclamation activities in the West Philippine Sea, a portion of the South China Sea claimed by the Philippines.

“You could have cut the problem in the bud had you taken [decisive] action. Why now, you tell us ‘you assert [the arbitral ruling]…Why don’t you bring your Navy there?” he challenged.

Security issues were also on the agenda of Duterte’s meeting with the Chinese ambassador, scheduled 4:30 pm on Monday.

They discussed a bilateral mechanism to “properly handle” the South China Sea dispute and avoid “misunderstandings,” said the Palace.

Aside from presenting the painting as a birthday gift, he handed over a formal invitation for Duterte to again visit China.

US and China are two world powers competing for dominance in the South China Sea where around 80% of world trade passes through.

Under the Duterte administration, there was a stark shift in policy where these powers are involved.

Duterte sought warmer ties with China as he lobbed curse-laden rants against former US president Barack Obama and other US officials for their criticism of his drug war.

His relationship with the US has warmed up a bit, however, under the administration of President Donald Trump who, in contrast, supposedly backs Duterte’s drug war.

Duterte has also been friendly to Ambassador Kim, in contrast to his attitude toward former US envoy Philip Goldberg who he never forgave for speaking critically of him during the 2016 national elections.

In between his meeting with Kim and Zhao, Duterte met Hungarian Foreign Minister Péter Szijjártó. The two discussed economic cooperation and Hungary’s plans to reopen its embassy in the Philippines. – Rappler.com