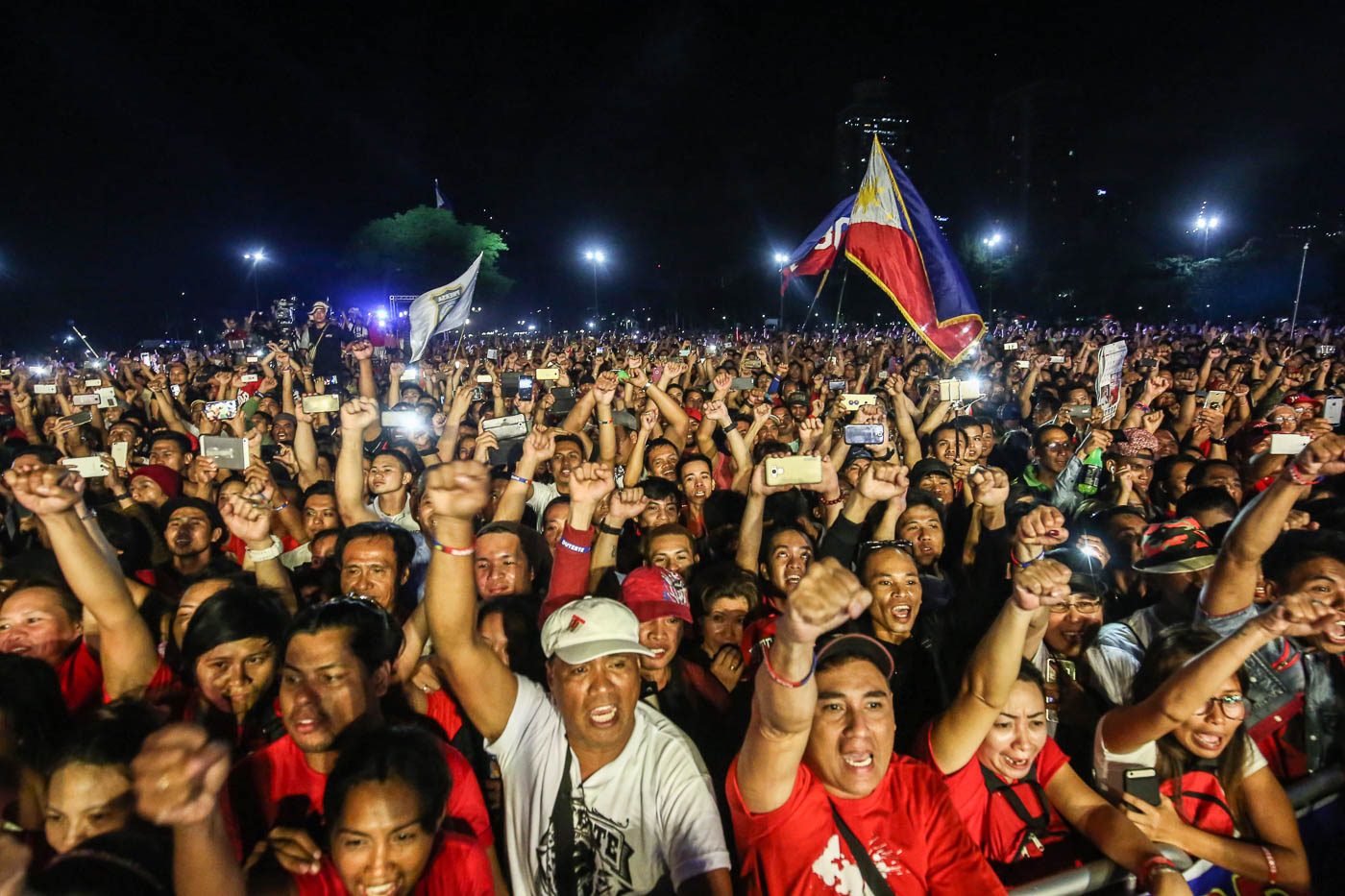 This was the main message of President Rodrigo Duterte’s supporters who gathered at the Quirino Grandstand in Manila on Sunday, April 2, calling for the ouster of Vice President Leni Robredo.

Dubbed “Palit Bise” (Change the Vice President), the rally came amid the impeachment threat against Robredo, who has been vocal in opposing Duterte’s bloody war on drugs. (READ: Alvarez calls Robredo ‘shameless’ for criticizing drug war)

According to Bondoc, the event is their way of expressing how they want “change” to come to the Office of the Vice President – be it through impeachment, resignation, or Robredo ceasing to criticize the Duterte administration. (READ: ‘Robredo peddling lies,’ says Impeach VP Leni Team)

Members of the “Impeach VP Leni Team” insist Robredo should be removed from office.

(The things he has to do in the next 5 years, those cannot be done quickly, so the people blocking his plans need to be removed… You keep on complaining and that’s not helping, so we will have you ousted.) While some are calling for Robredo’s impeachment, there are also pro-Duterte individuals who think she should just “change” the way she expresses dissent.

One of the protesters, Jerry Clemente, said the Vice President should help fix the country’s problems internally instead of voicing these to the international community.

“You don’t wash your laundry outside. It should be resolved within ourselves,” said Clemente.

(She can express her dissent – as part of the government – by constructive criticism. Not the other way around, openly demeaning the achievements of the Duterte administration, what is being done here.)

Another participant, Kenneth Celeste, said Robredo should “balance” the content of her statements.

“Sana suportahan iyong magandang nagawa,” said the 27-year-old, who traveled from Cavite to attend the event. (I hope she supports the good things done.)

In response to the rally, vice presidential legal adviser Ibarra Gutierrez issued a statement, emphasizing that both Duterte and Robredo are focused on their jobs because they respect each other’s mandates.

(If even despite this, there are some supporters of the President who insist on contradicting his decision, maybe they should explain to him.)

Asked about the rally on Sunday during a press conference in Cagayan de Oro City, Duterte refused to comment. “Ayaw ko mag-comment diyan. Mahirap ‘yan,” he said. (I don’t want to comment on that. That’s tough.)

The National Capital Region Police Office (NCRPO) estimated that there were around 4,500 people who participated in the rally.

Organizers denied that the rally was funded by any politician. They said donations from Duterte supporters amounting to as much as $46,000 or around P2.3 million funded the event. – Rappler.com