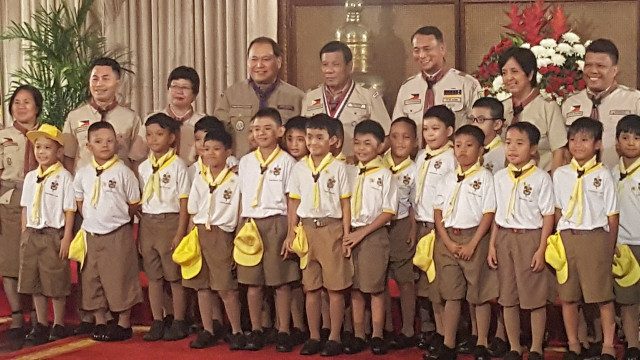 MANILA, Philippines – The presence of children as young as 4 years old did not stop President Rodrigo Duterte from issuing forceful threats of death to criminals and drug addicts.

(I am angry. I will kill people if they destroy our youth.)

In the audience were 4- to 6-year-old Kid Scouts and 7- to 10-year-old Cub Scouts. During the event, Duterte was named their Chief Scout, an honor given to all sitting presidents.

To these children, he confirmed that he has killed and will kill again for their sake. (READ: Duterte talks to kids about ‘generations’ of criminals)

(I am really strict. And they say I kill people. I really kill people if they destroy our children.)

Duterte did not hesitate to provide his usual gruesome metaphors meant to strike fear in the hearts of drug addicts. (READ: Shoot to kill? Duterte’s statements on killing drug users)

“You drug addicts, since you’ve been identified, avoid the streets, stay in your homes because I will throw you in Manila Bay. I’ll make you fertilizer for the fish,” he said in a mix of English and Filipino.

Despite this, Duterte apparently made an effort to modify his speech to somewhat fit his audience. Not once did he curse, though he had a close call when he uttered, “anak ng –” (son of a).

(I told them, I won’t say bad words. I will just talk about the dead, there are many dead in funeral homes.)

Fond of interacting with his audience, Duterte encouraged all of them to enter the Philippine Military Academy and become soldiers who will “die for their country.”

He also told the kids of his plans to bring back mandatory Reserve Officers’ Training Corps (ROTC) for Grades 11 and 12 in order to instill in them a “love for country” and quash laziness.

His speech appeared to make an impact on the kids. After his speech and photo opportunities with the scouts, Duterte walked offstage to have a chat with them.

As he turned his back, a kid could be seen and heard saying he wants to “kill drug pushers.” – Rappler.com