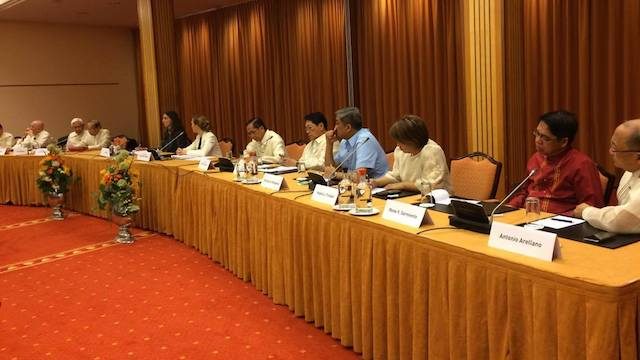 “We’re back where we belong, at the negotiating table. Congratulations,” Norwegian envoy Elizabeth Slattum, the 3rd party facilitator of the talks, welcomed the negotiators representing the government and the communist National Democratic Front (NDF) to the 4th round of talks.

“We have to remind ourselves that this is they way to address the challenges. Here at the table,” she added, prompting an applause from the negotiators.

The peace process suffered 5 weeks of impasse after Duterte scrapped the talks in February. He rejected the “talk while fighting” scenario proposed by the communist armed wing New People’s Army (NPA) after it withdrew its 6-months-old unilateral ceasefire declaration.

Duterte was eventually persuaded to re-open the talks but he imposed new demands.

Slattum recognized that harder work lies ahead. “We are not out of the woods quite yet. New crises will come. New challenges will arise. Painful compromises will have to be made. Let’s take on step at a time,” she said.

The negotiators return to the negotiating table amid pressure to forge a joint ceasefire agreement, one of the demands that Duterte set as precondition to the resumption of talks.

On Monday’s opening ceremony, the NDF declared it was willing to discuss an “interim” joint ceasefire agreement despite earlier protests against the new arrangement imposed by the government.

Chief NDF negotiator Fidel Agcaoili said they are “willing to discuss with its counterpart what kind of bilateral ceasefire agreement is desired by the GRP in place of the unilateral ceasefire.”

The opening ceremony was postponed for a day after Duterte made a last-minute call to the negotiators on Sunday to reiterate his demands. The panels held more backchannel talks to adjust the agenda in Noordwijk.

The two parties were supposed to reinstate separate unilateral ceasefire declarations, based on commitments they made during the backchannel talks in March.

But hostilities between the military and the communist armed wing New People’s Army reportedly prompted Duterte to demand a joint ceasefire agreement that will bind the NPA to stop the collection of revolutionary taxes, end hostile acts, and release captives.

The military and the NPA is accusing each other of alleged human rights violations and of acts to spoil the peace process. Defense Secretary Delfin Lorenzana and Armed Forces chief General Eduardo Año had tagged the NPA as “terrorists” a few days before the talks re-opened.

“The forging of the ceasefire agreement is not about giving in or giving up. It is about giving all for peace. This is the covenant of President Duterte to the people. We as peacewokers ourselves should be one with him,” said Bello.

But the talks in Noordwijk are expected to be contentious.

“It will prove to be difficult and exacting given the diversity of the positions taken by both parties on the issues at hand. But we will not waver from the tasks we embraced when we decided to restore the talks, which was for a while in an impasse mode,” Bello said in his opening statement. – Rappler.com