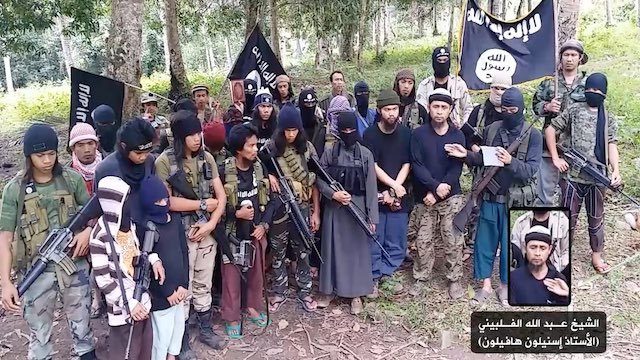 Facebook Twitter Copy URL
Copied
Instability and the easy flow of weapons have made Mindanao and nearby Philippine islands attractive to extremist groups, experts say

Instability and the easy flow of weapons have made Mindanao and nearby Philippine islands attractive to extremist groups, said speakers at the Milipol conference on homeland security in Singapore.

“Currently, ISIS is moving towards creating a territory in southern Philippines. The most recent communication issued by ISIS has announced that they have formally declared an East Asia division of ISIS in the southern Philippines,” counter-terrorism analyst Rohan Gunaratna told the conference.

“Our forecast for 2017 is that the threat in this region will grow because of the creation of an ISIS nucleus in the southern Philippines,” added Gunaratna. (READ: ISIS to followers in SE Asia: ‘Go to the Philippines’)

“The instability in the southern Philippines and the availability of weapons, internal displacement, refugee flows… create the ripe conditions for foreign terrorists to come,” he told Agence France-Presse after his speech.

Singapore’s Home Affairs Minister K. Shanmugam also told the conference that the southern Philippines “is becoming an area that is difficult to control despite the best efforts of the Philippine government.”

“So that is an area that can serve as a sanctuary for returning fighters from the Middle East. It can be a place where would-be terrorists can go… they can train, arms seem to move fairly easily into that area,” Shanmugam added.

Parts of Southeast Asia have long struggled with Islamic militancy. Hundreds of radicals from the region, including from Indonesia and Malaysia, have flocked to join ISIS in Iraq and Syria. (READ: ISIS recognizes Philippine-based extremist groups)

But as ISIS suffers battlefield setbacks, officials and analysts fear these fighters would return to their home region.

In Mindanao, which has long battled a Muslim insurgency, a handful of groups have sworn allegiance to ISIS. (READ: Filipino millennial joins ISIS in Syria) – Rappler.com