Bongbong Marcos on Cabinet post: I can’t say no to the President 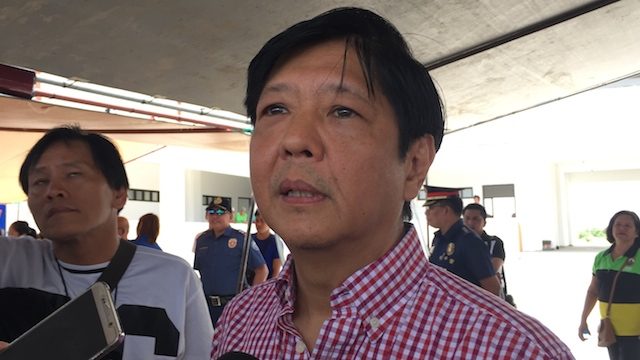 Facebook Twitter Copy URL
Copied
'If the President asks you to serve in whatever capacity, you can't say no,' says former senator Bongbong Marcos, who will be eligible for a government post after the one-year appointment ban on losing candidates lapses next month

The namesake of the late dictator made the statement on the sidelines of the 70th birthday celebration of Pampanga 2nd District Representative Gloria Macapagal-Arroyo in Lubao town on Wednesday, April 5.

Marcos, who would be eligible for a government post once the one-year appointment ban on losing candidates lapses next month, was asked if he was interested in a Cabinet position.

“If a President asks you to serve in whatever capacity, hindi mo naman puwedeng hindian, siyempre para sa bansa ‘yan (you cannot say no, that’s for the country). Of course, I will be happy, I’ll be proud, and I’ll be honored to serve in any position in the Duterte administration,” Marcos said.

The President earlier fired Ismael Sueno as interior secretary over corruption allegations. Since Marcos lost in the 2016 vice presidential elections, political observers have predicted that he could be offered the plum post.

Duterte had said Marcos would probably not accept a Cabinet position since it could affect his electoral protest against Vice President Leni Robredo, but the former senator himself countered this.

“It depends on the position. I suppose we leave that to the lawyers to study. Pero ang pagkaalam ko ay (but what I know is) it is only during an election [when] you are abandoning your protest,” said Marcos, in response to questions about Duterte’s statement.

He filed an electoral protest in June 2016 before the Supreme Court, sitting as the Presidential Electoral Tribunal.

Marcos is accusing Robredo and the Liberal Party of cheating in the May 2016 polls, which he lost by a slim margin. (READ: Robredo election lawyer: Poll fraud proven? Marcos camp ‘hallucinating’)

No talks with Duterte yet

Back in February, Duterte responded that Marcos was “not interested” in the DILG post, when asked if he would ever offer the position to the former senator.

According to Marcos, he has not talked to Duterte about any possible appointment in recent weeks.

“I have not spoken to the President for a few weeks now. And never pa naming napag-usapan ang kahit anong klaseng appointment (And we have never talked about any kind of appointment),” he said.

But what if Duterte asks him to choose between a Cabinet post and pursuing his electoral protest against Robredo?

“I don’t think I’ll have to. That’s why I really haven’t thought about having to make that decision,” said Marcos.

Another losing candidate who is expected to get a Cabinet post is Duterte’s running mate, Senator Alan Peter Cayetano. – Rappler.com