MANILA, Philippines – Negros Occidental Rep Ignacio “Iggy” Arroyo’s common-law wife, Grace Ibuna, has won the rights over his remains after a London court ruled in her favor, according to an ANC report Tuesday, February 21.

The UK court recognized Arroyo’s supposed last will that gives Ibuna, instead of Aleli, the rights over his remains. The will is part of the evidence presented in London.

Rappler is still trying to reach the camp of Arroyo’s legal wife, Alicia Arroyo, as of posting time.

In an earlier phone interview, Arroyo’s lawyer, Kapunan, questioned the London court’s jurisdiction over the case. She said Philippine law, which gives the legal wife the rights over a person’s remains, should prevail.

“It’s a principle of law that you are covered by the laws of your citizenship… You do not cease to be Filipino. Philippine law follows you wherever you go,” Kapunan said.

Alicia’s camp has therefore refused to testify before the London court.

The 2 women’s claims over Arroyo’s remains have triggered a legal showdown that could prove instructive for Filipinos entangled in similar cases. 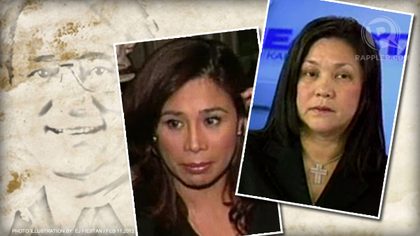 Last week, lawyers of Ibuna and Alicia presented arguments before the Quezon City Regional Trial Court after the latter filed for an injunction to gain custody over Arroyo’s remains.

“The funeral shall be in accordance with the expressed wishes of the deceased,” Article 307 says.

For her part, Kapunan has cited Article 305 of the Civil Code in defending her client’s right over Arroyo’s remains.

“The duty and the right to make arrangements for the funeral of a relative shall be in accordance with the order established for support, under Article 294,” the Civil Code says.