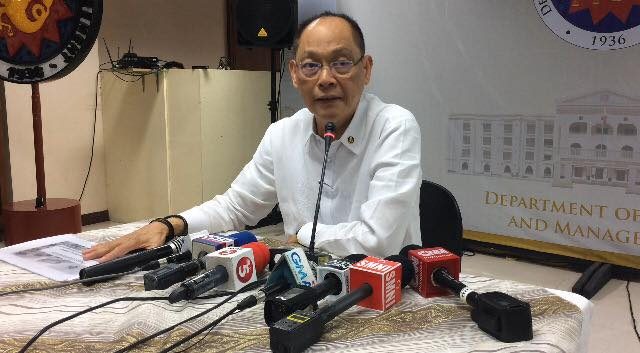 MANILA, Philippines – Budget Secretary Benjamin Diokno is bent on abolishing what he said is a corrupt system within the Bureau of Immigration (BI) that prevailed over decades despite continuous scrutiny.

In a press conference on Thursday, April 6, Diokno stood firm on his position that the use of the express lane fund (ELF) for overtime pay and to augment salaries of BI workers is illegal.

Diokno suggested a widespread corruption scheme stemming from the use of the fund, and said he will ask the Commission on Audit (COA) and the Bureau of Internal Revenue (BIR) to look into this.

He also insinuated that some auditors and tax authorities might have also benefited from the scheme.

“This corrupt system has been going on for so long, kasi walang accountability here… Probably COA just closed their eyes in the past, hindi nila pinapansin, baka kasama sila dito sa mess na ito. Puwedeng part of it, I’m not sure, but it’s possible. Bakit hindi rin tsine-check ng BIR, hindi ko rin alam. This has opened a can of worms; maraming implication,” Diokno said.

(This corrupt system has been going on for so long because there’s no accountability here. Probably COA just closed its eyes in the past, it didn’t take notice; maybe it’s part of this mess. Maybe it’s part of it; I’m not sure, but it’s possible. The BIR also isn’t checking this, I also don’t know. This has opened a can of worms; there are many implications.)

Diokno said the system is suspect because the BI does not release detailed reports.

As of posting, Diokno was in a meeting with Immigration Commissioner Jaime Morente and Justice Secretary Vitaliano Aguirre II, the latest in a string of meetings over the past 3 months to solve the salary complaints of BI workers.

Aguirre earlier called on the DBM to observe status quo on the use of the fund while an arrangement is being firmed up, but on Thursday, Diokno said there was no way this would happen.

The BI is still collecting charges from the express lane but since President Rodrigo Duterte vetoed the provision in the 2017 budget allowing its use to augment BI workers’ salaries, the proceeds now go straight to the national treasury.

Diokno questioned why BI workers would need to render overtime work when the commission has 1,074 vacant positions as of March 2017. Diokno pointed out that contractual workers in the BI could even be regularized because there are available positions.

Data provided by the DBM show a salary grade 11 BI worker could earn as much as P38,000 a month only on overtime pay, which is 200% more than their basic pay. This violates the rule that overtime pay must not exceed 50% of a government worker’s basic pay.

Diokno said the BI collects an annual average of P1.2 billion from the ELF, all of which goes straight to the bureau. Here is the DBM’s breakdown of how the fund is used:

Diokno also hit the use of the fund to pay health premiums of BI workers.

Asked about this, Diokno said the BI should still be able to pay its contractual workers in full and on time, even without proceeds from the ELF.

“They have the money, definitely, they cannot blame [the DBM]… Lalo na ngayon, our system of what you see in the budget is what you get. If I remember it right, 70% of the budget for 2017 has been released… Hindi nila puwedeng sabihin kailangan pa nila sa DBM, ang pera nasa kanila na,” Diokno said.

(They have the money, definitely, they cannot blame the DBM… Especially with our system of what you see in the budget is what you get. If I remember it right, 70% of the budget for 2017 has been released… They cannot say they still need money from the DBM because the money is already with them.)

Reached for comment, BI Spokesperson Antonette Mangrobang said she would have to wait until Morente was done with his meeting with Diokno and Aguirre on Thursday afternoon. – Rappler.com