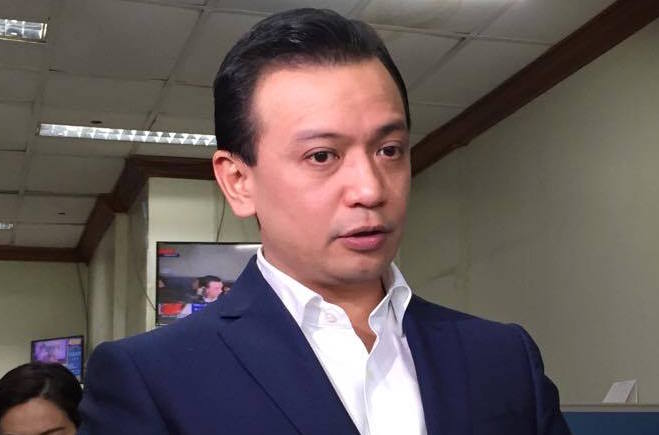 MANILA, Philippines – Senator Antonio Trillanes IV denied allegations he coerced a woman to testify against President Rodrigo Duterte, as he accused the President’s team of planting the witness in their camp.

A woman named Guillermina Barrido Arcillas claimed that she was “coached” and given money by a group – composed of lawyer Jude Sabio, Father Alberto Alejo SJ, and Trillanes, represented by a staff member named Jonel – to link Duterte to the illegal drug trade because the issue of extrajudicial killings wasn’t working.

Trillanes dismissed this as “propaganda.”

He said it was Arcillas who approached Sabio last year to provide information against Duterte. The senator’s staff then met with Arcillas in November 2016 to personally vet her but concluded that the latter was not credible and could not be used as a witness.

He said this could have irked Arcillas, as they got reports she had been asking money from other groups in exchange for information.

(First of all, I am denying allegations of bribery being made by this person. That is not true. You know, this person sent us a message that she had negative things to say against President Duterte. Besides the inconsistencies, we could not validate what she was saying. She had incredible claims in her statements that’s why we didn’t present her as a witness.)

(I only learned later on that she had also asked money from other groups. Apparently, this is her livelihood. I seriously believe she makes a living out of this.)

The senator also presented a video of Arcillas’ meeting with his staff to prove there was no coercion involved.

“Sabi pinipilit, pero the video will speak for itself. Nagbibigay din siya ng mga picture ‘andudoon siya katabi niya si ano [Duterte]. Sinabi niya voluntarily, willingly, hindi naman siya coerced. The information was obviously not given to her,” Trillanes said, referring to the photos sent by Arcillas to prove she has a connection to Duterte.

(She said she was forced but the video will speak for itself. She also sent us pictures of her with Duterte. She said things voluntarily, willingly, she was not coerced. The information was obviously not given to her.)

Asked who could be behind Arcillas, Trillanes said Duterte’s camp probably resorted to these tactics. He also questioned how Arcillas could afford to hold a press conference in a hotel in Davao City.

(There’s a problem there. Why is she having press conferences and a media roadshow? To me, it’s a propaganda game that they’re playing. But I’m going to burn them. It’s the group of Duterte.)

Davao journalist Editha Caduaya however said it was Davao-based radio station Brigada News that brought Arcillas to the weekly forum of the Armed Forces of the Philippines / Philippine National Police at the Royal Mandaya Hotel because they could not guarantee Arcillas’ protection. Arcillas first approached the station on April 4.

Trillanes suspects Arcillas was “planted” in their camp to weaken their case.

(I’m beginning to think she was planted in our camp to bait us. We’d use her then she would change her tune later on. But it’s not like that, the process we use to screen witnesses is not easy.)

(If it’s just propaganda we were after, it would have been great propaganda to link Duterte himself to drugs, to cocaine, if you really want to just manufacture a story, but we didn’t bite because we found Arcillas suspicious.) – Rappler.com