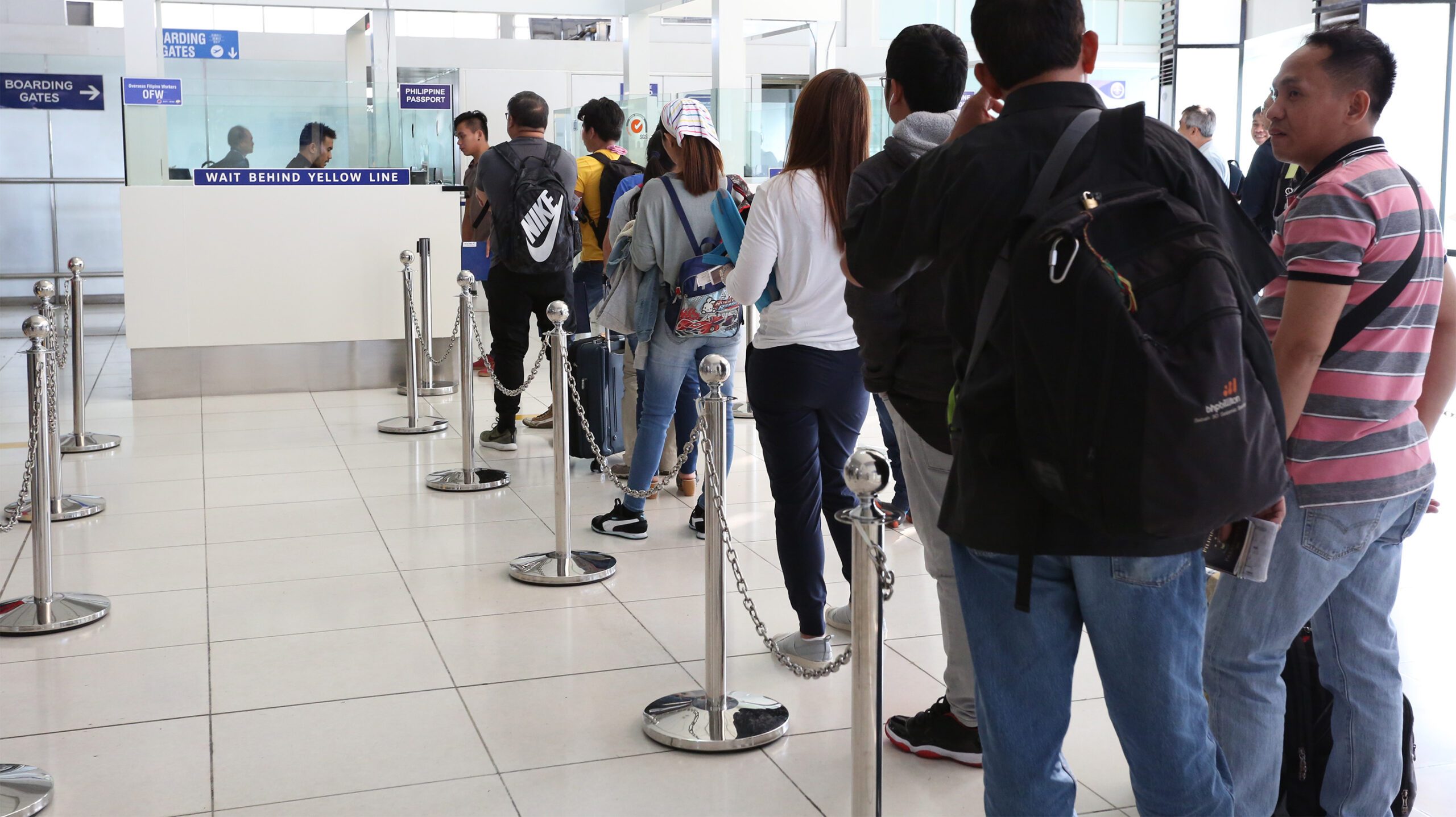 Facebook Twitter Copy URL
Copied
Budget Secretary Benjamin Diokno says he will not cave in to blackmails of immigration officers who have skipped work, creating long lines at the airports

MANILA, Philippines – Department of Budget and Management (DBM) Secretary Benjamin Diokno said the executive branch has asked the military to train personnel to man the airports as immigration workers resign or skip work over pay issues.

“We have asked the military to train people just in case,” Diokno told reporters during a news conference on Thursday, April 6.

Over 30 Bureau of Immigration workers have resigned since January after President Rodrigo Duterte vetoed the budget provision that for long had allowed the express lane fund (ELF) to be used by the BI for overtime pay and to augment the salaries of its workers. Others have skipped some work days, prompting Philippine Airlines (PAL) to advise its passengers to come to the airport 5 hours before their flights.

The concern over airport operations is being used by Aguirre to negotiate for status quo while a permanent solution is being discussed. At the very least, Aguirre said, the DBM could approve a revised formula for how the ELF will be used.

Diokno, however, refuses to give in to the pressure.

“We have a plan B, a plan C, and a plan D,” Diokno said. (READ: FACT CHECK: Immigration officers not ‘contractuals,’ contrary to Diokno’s claim)

“[Soldiers] are not trained and they have no knowledge of immigration law rules and regulations,” Sadiasa said in a text message to Rappler. “It is only the DOJ (Department of Justice) Secretary who can deputize the military to be acting immigration officers.”

The BI, which is under the DOJ, has announced the deployment of 170 additional immigration officers to address the qeues problem.

The issue has pitted BI workers against Diokno, evident in the cutouts of the budget secretary’s face plastered over immigration stations at the airport as a sign of protest.

Before he started his news conference on Thursday, Diokno said: “I don’t particularly like that my face is shown all over the airport because of this.” Diokno said he has asked officials of the Ninoy Aquino International Airport to remove the cutouts.

Since the issue broke out early February, Diokno has remained stern on his stand that the old practice of the BI’s utilization of the ELF is illegal. When immigration workers started skipping work days, he described the move as “hijacking the government.”

According to Diokno, this strategy has always been used by the BI to insist on its control of the ELF.

“They’ve been trying to blackmail the government ever since. Many governments have tried to fix this rotten system but without success kasi laging may threat na mag-strike sila (because the workers always threatened to stage strikes). Maybe the lack of political will, [past administrations] just decided to not touch the problem,” Diokno said. (READ: Duterte’s veto leaves thousands of BI workers scrambling for money)

Earlier DBM administrations tried to do the same, but the BI has always ended up convincing the House of Representatives to allow it to continue the practice.

In 2015, BI Commissioner Siegfred Mison reasoned out that if they lose control of the ELF, they would no longer have the money to pay their employees.

Diokno insisted there is a budget for employees’ salary and reiterated that he even added 936 new positions, but that these are not being filled by the BI. Diokno said there are currently 1,074 unfilled permanent positions within the bureau.

As for overtime pay, Diokno has allotted P200 million but this has not been withdrawn by the BI yet. BI Commissioner Jaime Morente earlier explained that it is a legal strategy to not avail themselves of the overtime budget.

“BI employees believe that proceeding with the request for payment of the regular OT pay may be construed later as abdication of their appeal to bring back the honorarium/allowance from the ELF,” Morente said in an earlier statement.

But Diokno said: “We have been discussing this for 3 months at the Palace. I think they are convinced that we really have to put a stop to this in the spirit of transparency, good governance, and anti-corruption.” – Rappler.com