Nationwide, 75% of respondents said they are satisfied with Duterte’s performance, while 12% are undecided and 12% are dissatisfied, according to the First Quarter 2017 survey of the Social Weather Stations (SWS), first published in BusinessWorld newspaper.

This translates to a net satisfaction rating of +63, classified as “very good,” the survey firm said.

The President’s rating in Balance Luzon dropped 9 points (+51 from +60), but this was offset by a 13-point gain in Mindanao (+87 from +74), according to the BusinessWorld report. 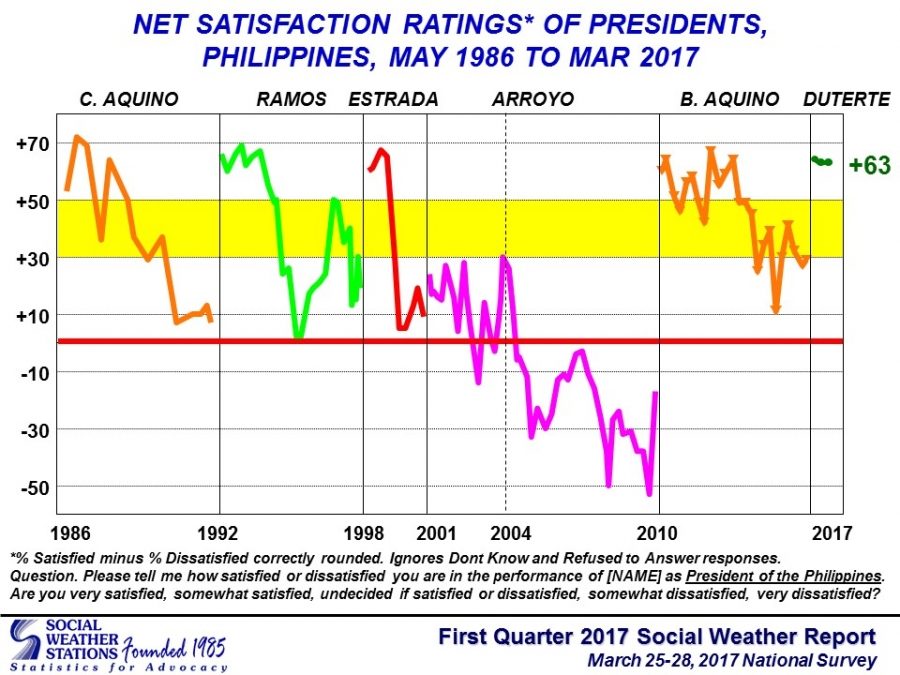 Ramon Casiple, executive director of the Institute for Political and Electoral Reform, told BusinessWorld that this was due to the “unequal attention” given to the two regions – Mindanao getting more, while Luzon outside Manila getting less.

He also said that the survey result follows a “normal curve” compared to other presidencies.

Duterte’s net satisfaction rating in Metro Manila is now at +64, while it is at +62 in the Visayas. Among socioeconomic classes, he has the highest net satisfaction rating among Class D respondents (+64), followed by Class E (+60) and then Class ABC (+56).

By gender, both men and women are generally satisfied with the President’s performance (+65 for men, +61 for women). “Although surveys are not his priority it inspires the Chief Executive and the national leadership to continue its top agenda of ridding Philippine society of drugs, criminality, and corruption, or building a trustworthy government; prosperity for all; and peace within our borders,” said Presidential Spokesperson Ernesto Abella in a statement on Monday.

“We value this public trust, and will continue to work hard to serve the best interests of the people – and fulfill the vision of a nation worthy of the Filipino people,” Abella added.

A net satisfaction rating is classified as follows:

The survey was conducted March 25-28, via face-to-face interviews. The margin of error is +/-3% at the national level, and +/-6% for the regional level.

The survey was non-commissioned, the SWS said. – Rappler.com