Duterte to China: Relax, no guns in PH islands

Apr 10, 2017 4:55 PM PHT
Rappler.com
Facebook Twitter Copy URL
Copied
'For the information of China, we will not place there (in the South China Sea) any offensive weapons, not even one gun,' says Philippine President Rodrigo Duterte 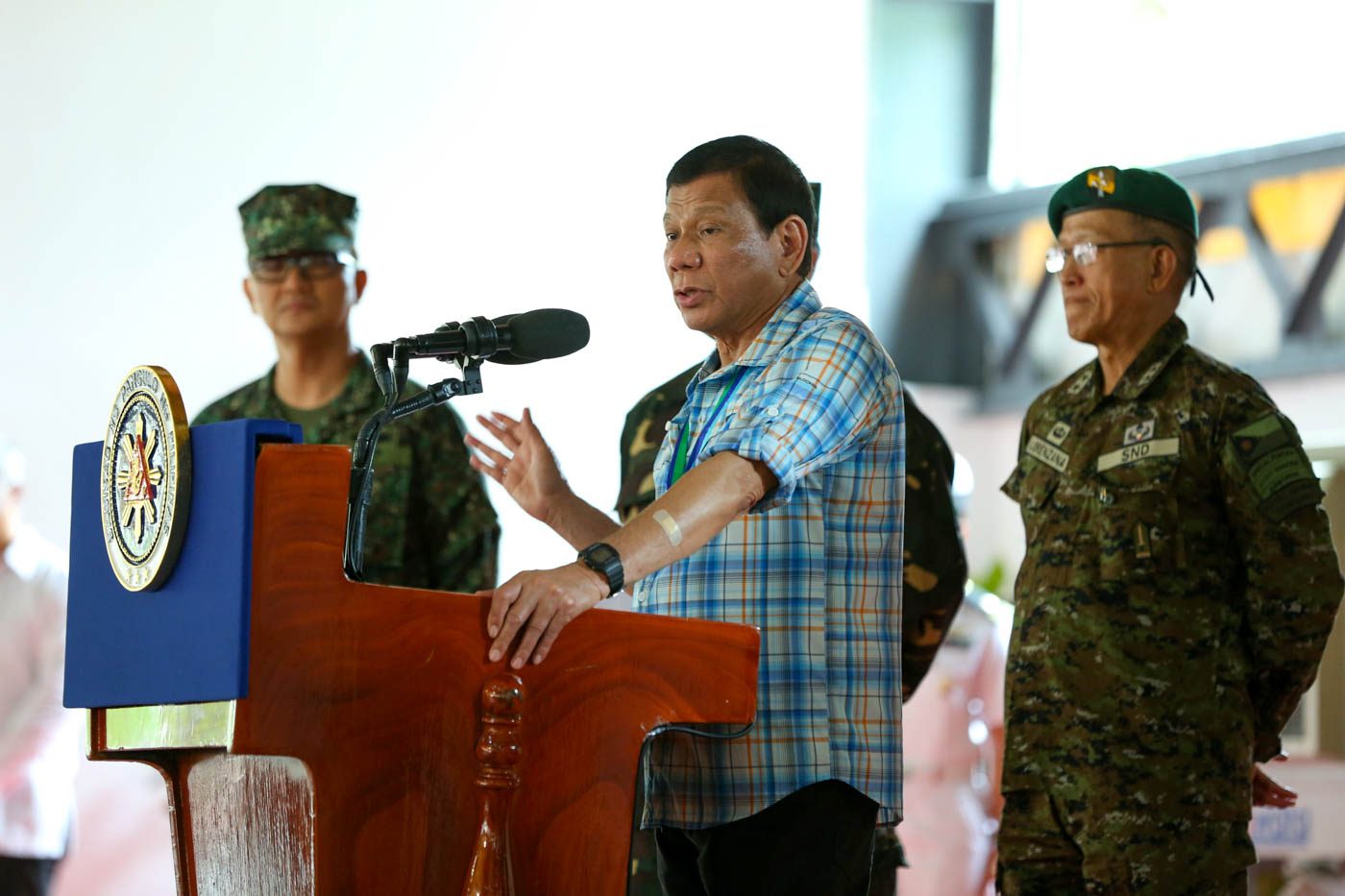 MANILA, Philippines – President Rodrigo Duterte on Monday, April 10, further explained his decision to order the Armed Forces of the Philippines (AFP) to “occupy” islands in the West Philippine Sea (South China Sea), saying he just wants to “maintain the geopolitical balance” there.

Speaking to reporters before he left for a state visit to 3 Middle Eastern countries, Duterte also asserted that ties between the Philippines and China remain friendly. Beijing claims virtually all of the South China Sea.

“For the information of China, we will not place there any offensive weapons, not even one gun. We are just there to claim the island for us because that is really ours. And I have ordered the Armed Forces to build structures there to signify to all that atin ito, at lagyan ng flag ang structures (the islands are ours, and the Philippine flag should be placed on the structures),” the President said.

“We do not mean harm to China. We’re friends, as a matter of fact,” he continued. “China can relax. We are friends. We will not go to war with you. We are just trying to maintain the balance of the geopolitical situation. Eh lahat nagkukukuha eh (Everyone’s claiming the islands as their own).”

Duterte had announced his orders for the AFP last Thursday, April 6, during a press briefing in Palawan, the province on the frontlines of the sea row with China. He had visited soldiers in Camp Artemio Ricarte there.

Duterte’s friendly approach toward Beijing is in stark contrast to that of his predecessor, Benigno Aquino III. Under Aquino, the Philippines filed a case against China before an arbitral tribunal at the Permanent Court of Arbitration in The Hague, Netherlands, and won. China, however, refuses to recognize the ruling.

Duterte was also previously hostile toward the United States, a traditional ally of the Philippines. He has, however, displayed warmer behavior toward the administration of US President Donald Trump, in contrast to tirades against Trump’s predecessor, Barack Obama. (READ: Duterte asks US envoy, ‘Why didn’t you stop China?’)

Asked for comment about the friendly meeting between Trump and Chinese President Xi Jinping in Florida last week, Duterte called it “a welcome development.”

“As a matter of fact, I’ve been praying that they get together and talk about really what ails this planet, and talk about peace and stop violence all over the world,” he said.

The US and China are jostling for power in the South China Sea, where around 80% of world trade passes through.

Chinese Ambassador to the Philippines Zhao Jianhua earlier told Duterte that Beijing is determined to work with the Association of Southeast Asian Nations (ASEAN) in finalizing the Framework of the Code of Conduct (COC) on the South China Sea.

The Philippines, chairman of the ASEAN for 2017, aims to finish the framework by year-end.

The framework is intended to lay the foundation for legally-binding rules on the management of disputes on the South China Sea. – Rappler.com