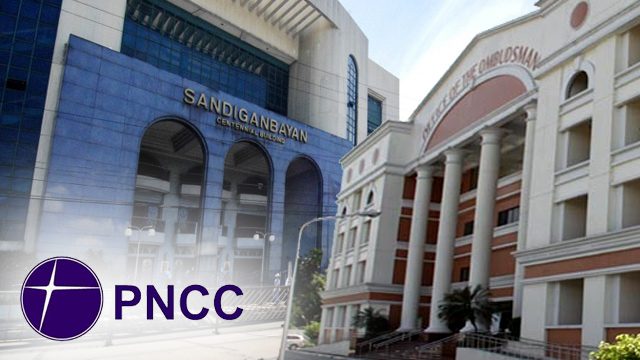 MANILA, Philippines – They were charged with graft over a P6-billion scandal that the Supreme Court once described as one of the “most brazen and hideous” case of corruption in Philippine history, but now 12 former government officials are acquitted of their supposed crimes because the court said prosecutors took too long investigating.

Anti-graft court Sandiganbayan dismissed graft charges against former officials of the Philippine National Construction Corporation (PNCC) after giving merit to their arguments that the Office of the Ombudsman violated their constitutional rights to speedy disposition of cases.

Of the 19 officials charged in this case, 12 were acquitted. These were the 12 who invoked their rights against inordinate delay while others based their appeal on evidence vis-a-vis the law.

This is a scandal that goes as far back to 2001. The PNCC is a debt-ridden government controlled corporation that has a stake in toll revenues.

The old PNCC borrowed P2 billion during the ’70s from Japanese firm Marubeni, which they did not acknowledge when they became the state-run PNCC. British lending firm Radstock bought out Marubeni’s rights to PNCC’s debt.

Radstock took this claim to court and won. By then, the debt has ballooned to P17 billion. So the PNCC and Radstock entered into a compromise agreement to just pay P6 billion, supported by then government corporate counsel Agnes Devanadera.

This was problematic because the PNCC owed various government entities a total estimate of P41 billion, so to pay Radstock, using some government assets even, would be sorely disadvantageous to the government.

In 2009, the Supreme Court (SC) nullified the deal saying the PNCC could not release the money to pay the debt without proper appropriations allowed by the law.

Justice Antonio Carpio, now a senior associate justice at the High Court, wrote then in the decision that the agreement was a  “pillage of the public coffers that ranks among one of the most brazen and hideous in the history of this country.”

The petitioner in the SC case was former PNCC president Luis Sison. As early as 2006, Sison had filed a graft complaint before the Ombudsman against PNCC officials for allowing the deal.

In 2010, Sison re-filed the complaint with the Ombudsman to include more PNCC officials. This time, Sison uses the 2009 SC decision to strengthen his case.

Sison accused the officials of manipulating the process and conspiring with Radstock to benefit from the deal. Sison said then: “If we have jailed Erap for a plunder case worth P700 million, what we do with those who are quietly stealing P5 billion?”

In December 2016, the Ombudsman finally charged 18 PNCC officials of graft before the Sandiganbayan. The Ombudsman also charged Devanadera for approving the deal.

In its charge sheet, the Ombudsman said the officials violated section 3(e) of the graft law which prohibits public officials from giving unwarranted benefits to a party that would cause undue injury to the government.

In a 42-page resolution promulgated by the Sandiganbayan First Division on April 7, the court dismissed the charges against 12 officials who complained in their appeal about the Ombudsman’s delay.

The court slammed the fact that there was already a complaint as early as 2006 but that the Ombudsman only started moving in 2010 when Sison re-filed the complaint with additional people.

“The Ombudsman did not offer any plausible explanation why it slept on the complaint against Aguilar for these span of years,” the resolution said.

The court also noted after the Ombudsman began investigation in 2010, it again took the office another 6 years to file the proper charges in court. While the court recognizes the Ombudsman’s power and prerogative to conduct its own investigation, the Sandiganbayan said that the Ombudsman could have already used documents available to them by virtue of the SC decision.

“For sure the (SC) ruling must have afforded the OMB a rather less intricate start. (The SC ruling) had already provided the main and essential groundwork for the preliminary investigation as it had already made findings on the subject compromise agreement,” the court’s resolution said.

The court added that the aggregate period of 6 years from 2010 when the additional complaint was filed to 2016 when the charges were filed in court is “unjustified” and “infringed upon the accused-movants’ rights to speedy disposition of their cases.”

The Ombudsman argued for its case in separate replies to each of the accused motions.

It explained that it only took them more than a year to finish its probe.

The Office of the Ombudsman said that when a case goes through a fact-finding investigation, this process does not count as a criminal proceeding because it is confidential in nature and does not subject individuals to the burden of the process yet. (READ: Ombudsman asks SC to strike down ‘delay’ doctrine)

But the Sandiganbayan insisted on counting beyond the Ombudsman’s official timeline.

The Ombudsman however has a pending petition before the SC to review the doctrine of inordinate delay. The Ombudsman even filed a motion to refer the case to the en banc because only a court sitting en banc could amend or even possibly strike down a legal doctrine.

In their motion, the Ombudsman asked the SC to order the Sandiganbayan to temporarily stop using the doctrine of inordinate delay in resolving cases. Sources also said they wrote to Sandiganbayan Presiding Justice Amparo Cabotaje-Tang to seek her consideration.

The anti-graft court does not feel compelled to give in to the Ombudsman’s wishes.

In its resolution on the PNCC case, the court criticized the 4-year period between 2006 and 2010 even saying the “case was put into oblivion” by the Ombudsman. Sandiganbayan also insisted on including in the count the fact-finding investigation.

Prosecutors defended themselves by saying that a P6 billion case that spanned many years will really take time to investigate. They also explained that the delivery of notices to the accused and others involved delayed the proceedings because the PNCC moved offices, and that individuals were, at times, hard to reach.

But for the Sandiganbayan, why would the Ombudsman take that long when their final resolution would just “echo” the SC ruling?

“The resolution (is) essentially an echo of the contents of the decision (in the SC ruling). This, to the Court’s mind, makes feeble the justification of the OMB that a longer period was necessary because it had to deal with voluminous documents and records, complex issues and several respondents,” the court said.

The Office of the Ombudsman stands by its petition that the doctrine of inordinate delay shall be reviewed, if not struck down, at the risk of it being abused by officials.

They also reiterated that under the leadership of Ombudsman Conchita Carpio-Morales, the office has recorded an unprecedented disposition rate, which, for 2016, stands at 52%.

They said that Morales inherited 24,352 cases when she took office, and even though there were 30,712 new cases filed from then until now, the office has managed to eat up into the workload so that they only have 6,216 cases on their plate.

This, for them, shows they do not “sleep” on cases. In their petition to the SC, the Ombudsman hit back at the Sandiganbayan saying that their standards for inordinate delay is “confusing,” ranging “from a high 14 years to as short as 4 years.”

Meantime, the Sandiganbayan stands to hear motions that invoke the same right, among them high-profile cases such as former Palawan governor Joel Reyes in the multi-million peso fertilizer fund scam. – Rappler.com