MANILA, Philippines (UPDATED) – While most Filipinos support President Rodrigo Duterte’s war on drugs, their “satisfaction” with the campaign dropped 11 points, according to a March 2017 survey by polling firm Social Weather Stations (SWS).

“This gives a net satisfaction rating of +66, classified by SWS as very good,” the polling firm said in a release to media.

Net satisfaction on the drug war went down from “excellent” to “very good,” SWS said.

The March 2017 net satisfaction rating was an 11-point decline from the 77+ rating during a similar survey in December 2016.

The polling firm defines “net satisfaction” as the difference between the percentage of those who were satisfied and those who were dissatisfied. The survey has an error margin of 3% for national percentages. 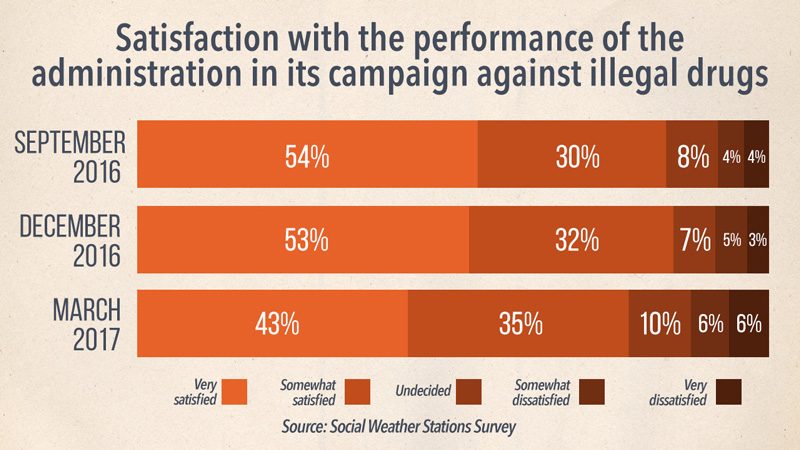 Most Filipinos in the survey said they were worried that they or anyone they know would be a victim of “extrajudicial killings.”

During the December 2016 poll, 78% said they were worried that they or someone they know would become EJK victims.

Since the war on drugs began in July 2016, police have noted a spike in murder and homicide cases nationwide, while reporting a decrease in all other crimes. Police have killed over 2,500 drug suspects in police operations and have tallied some 1,500 deaths with links to illegal drugs. Another 3,500 or so deaths are still being investigated. (READ: IN NUMBERS: The Philippines’ ‘war on drugs’)

An overwhelming majority or 92% of respondents think it’s important for police to capture drug suspects alive in the campaign on illegal drugs. During the December survey, 94% said keeping suspects alive was important.

Over two-thirds of those polled or 70% of respondents said the administration is serious about solving the problem of EJKs in the country.

Police have insisted that EJKs do not exist in the Philippines, since the killings, they say, are not state-sponsored.

But Filipinos are still “split” over whether they believe the police are telling the truth when they say slain suspects “fought back” (nanlaban, in Filipino) during operations.

Malacañang welcomed the SWS survey results, saying it still showed that a “great majority” of Filipinos remain satisfied with the war on drugs “notwithstanding the negative criticism we received here and abroad.”

“We note that the public (at 70%) believes the current administration is serious about solving the problem of so-called ‘extrajudicial killings’ (EJKs); and its efforts to cleanse the Philippine National Police,” said Presidential Spokesman Ernesto Abella in a statement sent on Wednesday morning, April 19.

He made no mention of the drop in satisfaction with the anti-drug campaign.

The Palace also chose to focus on the bright side when it came to the figures showing that a majority of Filipinos worry about becoming victims of extrajudicial killings. Abella emphasized that the figures show a drop in those with this concern.

“Many Filipinos are less worried about their personal safety; as they feel safe and secure in the streets and at home,” he said.

Given the support of many Filipinos for the war on drugs, Abella said, “The drive will be relentless until the drug apparatus is rendered inutile.” – Rappler.com