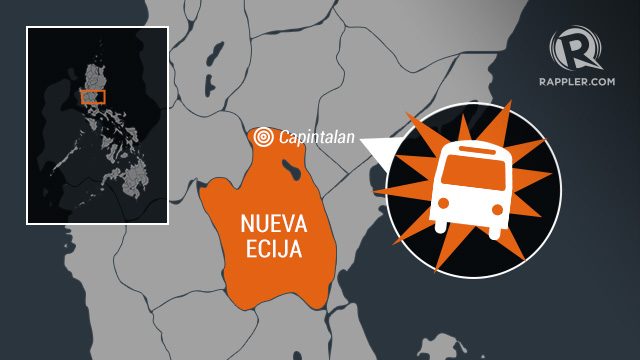 Facebook Twitter Copy URL
Copied
(3rd UPDATE) 46 people are still being treated in different hospitals in Nueva Ecija and Nueva Vizcaya, with 4 of them in critical condition

ISABELA, Philippines (3rd UPDATE) – The number of deaths in the bus crash in Nueva Ecija has risen to 31, a police official said on Wednesday, April 19.

Four were said to remain in critical condition.

Yarra said one of the fatalities was the bus driver, Rolando Mangawang.

A total of 24 passengers were killed on the spot after the bus fell into an 80-foot ravine in Capintalan village in Carranglan, late Tuesday morning, April 18.

Yarra said the bus was overloaded when the incident happened. It had a total of 77 passengers but only had a capacity of 45 people.

He said the provincial police was coordinating with the Land Transportation Franchising and Regulatory Board (LTFRB) for the filing of charges against the bus company.

The LTFRB issued a 30-day preventive suspension order against Leomarick Trans on Tuesday.

LTFRB board member Aileen Lizada went to the crash site on Wednesday morning to conduct an inspection and to meet with local authorities.

Following the incident, Senator Grace Poe, chairperson of the Senate committee on public services, reiterated her proposal to create a National Transport Safety Board.

(This incident only heightens the need for a National Transport Safety Board that would conduct independent investigations on such accidents, and would create policies and programs to prevent road disasters.)

Poe’s committee had earlier probed the bus crash in Tanay that killed 15 people, mostly college students who were on a field trip. (READ: Why road crashes are no accidents) – with a report from Agence France-Presse / Rappler.com