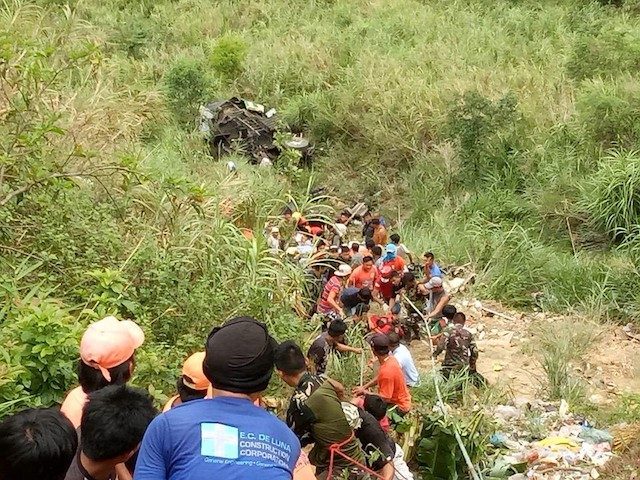 ISABELA, Philippines – The public transport bus that figured in one of the deadliest crashes in the country so far, this year, was overloaded, the Nueva Ecija police chief said on Wednesday, April 19.

Senior Superintendent Antonio Yarra made the assessment in a phone interview with Rappler on Wednesday, or a day after a Leomarick Trans minibus fell into a ravine in Nueva Ecija, leading to over 30 deaths.

“Based on our account of deaths and injured, the bus was carrying 77 persons,” Yarra said, adding that the minibus was supposed to carry only up to 45 passengers.

Initial reports placed the number of passengers at around 60.

Based on the initial report to the Nueva Ecija Police Provincial Office, the bus, which was traveling from Isabela to Candon City in Ilocos Sur, was at the curved portion of the Maharlika Highway in Barangay Capintalan when the driver “lost control” of the vehicle.

Yarra said based on the survivors’ account, one of the bus’ front tires exploded, causing it to overturn, and then fall into the ravine. (READ: Why road crashes are no accidents)

Authorities said that as of Wednesday morning, 31 people were dead following the crash, while 46 were injured and still confined at different hospitals in Nueva Ecija and Nueva Vizcaya. (READ: Help identify child survivor of Nueva Ecija bus crash – hospital) – Rappler.com