Duterte, De Lima on TIME list of most influential people 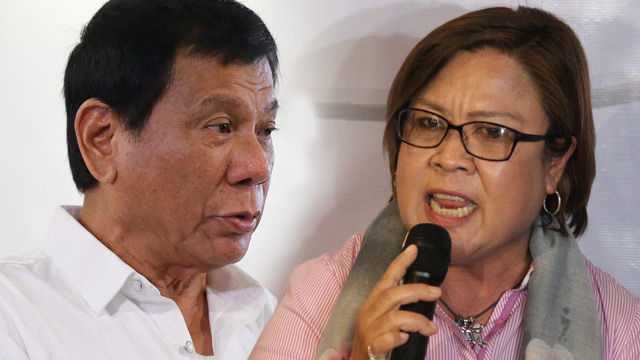 MANILA, Philippines (3rd UPDATE) – President Rodrigo Duterte and his fiercest critic, Senator Leila de Lima, are both on this year’s TIME list of The 100 Most Influential People in the world.

Duterte’s write-up was by former Colombian president César Gaviria, while the one for De Lima was written by former United States ambassador to the United Nations Samantha Power.

Gaviria was also the one who wrote a New York Times opinion piece titled “President Duterte is repeating my mistakes”, based on his own experiences in fighting Colombia’s drug problem. (READ: Colombian ex-president to Duterte: Force won’t solve drug war)

For TIME magazine, Gaviria again criticized Duterte’s approach, citing the thousands of deaths recorded in the Philippines since the drug war began. (READ: Duterte on war on drugs: ‘More killings to come’)

“When I was President of Colombia, I was also seduced into taking a tough stance on drugs. But after spending billions, I discovered that the war was unwinnable and the human costs were devastating. The cure was infinitely worse than the disease,” said Gaviria, who led Colombia from 1990 to 1994.

“There are solutions that work. Duterte could start by treating drugs as a health, human rights and development issue. He could prosecute the most violent criminals and provide treatment for users rather than condemn them to prison, or worse,” he went on to say.

“There will always be drugs in the Philippines, whether the President likes it or not. The tragedy is that many more people are likely going to die as he learns this lesson.” (READ: ‘Nanlaban sila’: Duterte’s war on drugs)

If Duterte’s response to Gaviria’s New York Times piece is any indication, he won’t welcome the TIME write-up. Back in February, Duterte called the former Colombian leader an “idiot” for “lecturing” him on the war on drugs. (READ: Duterte’s advice to critics: Don’t lecture me in public)

The Philippine senator has spoken out, according to Power, at a time when “most opposition politicians have kept their heads down, knowing Duterte is both terrifyingly brutal and massively popular.”

Last year, Duterte himself had accused De Lima of facilitating the drug trade inside the national penitentiary, an allegation she denies. (READ: EXPLAINER: What is Leila de Lima being accused of?)

The two have been at odds since De Lima’s time as chairperson of the Commission on Human Rights, when she ordered a probe into killings allegedly committed by the DDS under then Davao City mayor Duterte.

Despite being detained, however, De Lima is unfazed, said Power.

“[Even] from prison, she continues to speak out against her President: ‘It’s not O.K. with me that we have a murderous psychopath occupying the highest post in the land.'” (READ: De Lima to Duterte, ‘blind followers’ in drug war: Your time will come) – Rappler.com